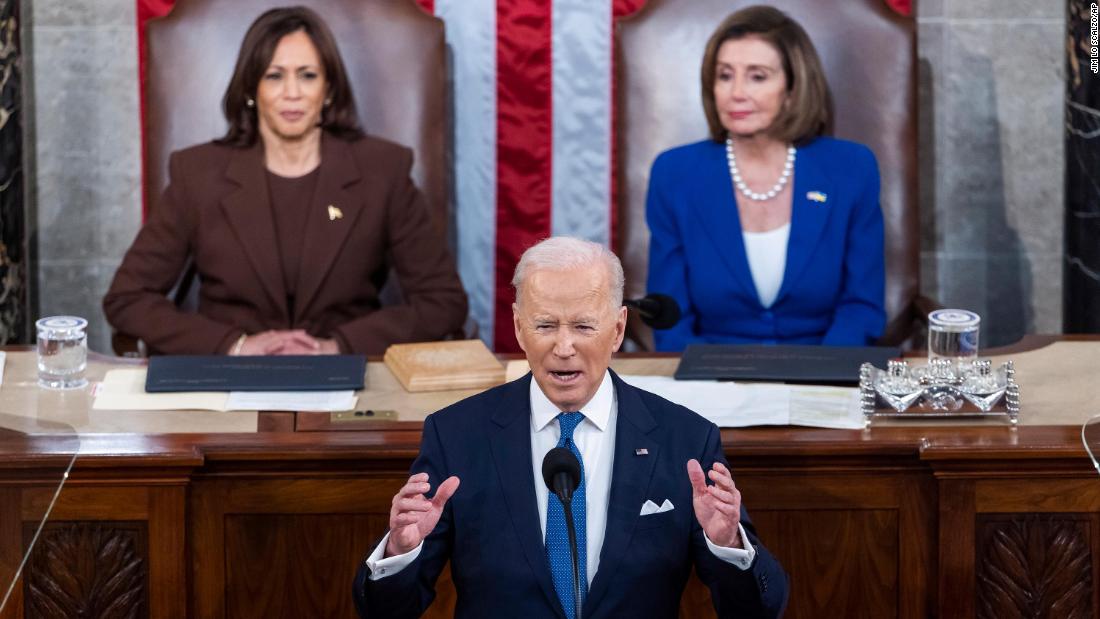 Yet the limits of Biden’s approach were evident even as he was speaking. A 40-mile long Russian convoy was approaching Kyiv, and explosions were rocking major cities.

And while he laid out a plan to combat higher prices at home, any president’s ability to counteract inflation is narrow.

The stark divisions currently fracturing the country were just as plain Tuesday as they have been since Biden took office. His economic proposals gained almost no applause from Republicans in the audience.

In the eight months until November’s critical midterm elections, Biden is not likely to have a larger audience than he had Tuesday night; his message will have to resonate if he hopes to speak next year to a Congress still controlled by Democrats.

Here are five takeaways from Biden’s first State of the Union address:

Biden did not plan on delivering his first State of the Union as a European capital came under fire. But the moment thrust upon him by Russia’s invasion of Ukraine provided an urgent illustration of the animating theme of his presidency: that democracies must self-defend against creeping global authoritarianism.

“In the battle between democracy and autocracies, democracies are rising to the moment and the world is clearly choosing the side of peace and security. This is the real test,” Biden said, concluding the first section of his speech that had been given over to the Ukraine crisis.

Ahead of his speech, Biden spoke by phone to Ukrainian President Volodymyr Zelensky, who in a CNN interview called on the President to deliver a strong and “useful” message in his address. Sitting above the House floor in the first lady’s box was the Ukrainian ambassador to Washington, Oksana Markarova.

Biden sought to convey the unity of NATO and the West in his speech, underscoring what US officials say has been unprecedented cooperation between allies to inflict economic pain on Putin.

“While it should not have taken something so terrible for people around the world to see what’s at stake, now everyone sees it clearly,” he said.

Since even before the invasion began, Biden has sought to underscore why Americans should care about a conflict 5,000 miles away. While a majority of Americans – 79% – said in a CNN poll this week they are following events in Ukraine at least somewhat closely, White House aides have acknowledged that foreign events are typically not atop Americans’ list of priorities.
On Tuesday, Biden made plain what the stakes are in Ukraine, even as he emphasized US troops would not be fighting on the ground there and reassured Americans of their safety.

But he also attempted to prepare Americans for what the effects could be at home, where economic sanctions on Russia could exacerbate already-high gas prices, among other hardships.

In a rare site, members of both parties repeatedly applauded Ukraine comments

Biden opened his address by hailing the Ukrainian people and sending a message to Russia. Inviting the chamber to stand and applaud, he also underscored what has become rare unity among members of Congress in opposing Russia’s invasion.

“Stand and send an unmistakable signal to the world, to Ukraine,” Biden said to standing applause from both sides of the room. “Bright, strong, resolved. We the United States of America stand with the Ukrainian people.”

The steps Biden has taken so far during the Ukraine crisis – inflicting withering economic sanctions, dispatching American troops to NATO allies and providing Ukraine military support – have drawn mostly bipartisan praise.
That’s not to say everyone in Washington believes he’s doing enough. Some Republican lawmakers have called on the US to enforce a no-fly zone over Ukraine, a prospect the White House has rejected. Others have said the administration should share more actionable intelligence with Ukraine. And top Republicans have blamed Biden for cultivating a weak foreign policy generally.

Still, American resolve against Putin appeared mostly bipartisan Tuesday evening. As Biden levied this censure of the Russian leader, both sides of the chamber rose in applause:

“He thought he could roll into Ukraine and the world would roll over. Instead, he met with a wall of strength he never anticipated or imagined. He met the Ukrainian people,” Biden said, saying later he was going after Russian oligarchs as he tightens his economic punishment: “We are joining with our European allies to find and seize your yachts, your luxury apartments, your private jets. We are coming for your ill-begotten gains.”

For a President who has vowed to seek out bipartisan unity, the joint backing for his condemnation of Putin will have been reassuring. And in his speech, he sought to underscore that Americans were together in their support for Ukraine.

But the divisions were evident moments later, when Republicans booed as Biden spoke about the economy.

In what was once planned to be the centerpiece of the address, the President laid out a new four-point plan for lowering costs on Americans, who have grown anxious about inflation.

“Too many families are struggling to keep up with their bills. Inflation is robbing them of gains they thought otherwise they would be able to feel. I get it,” Biden said, calling getting prices under control his top priority.

The plan – which includes points like making more products in America and increasing competition in different sectors – was constructed around a recognition Biden was not doing enough to demonstrate his understanding of Americans’ economic anxieties. The war in Ukraine complicates the approach, since new sanctions may cause the price of gas to increase.

In his speech, Biden still sought to make clear that America’s economic recovery remains robust. Citing record job growth and low unemployment, he argued the country was well on its way to overcoming its pandemic-induced downturn.

Yet Biden was cautious about appearing to crow too much about an economic recovery many Americans say they can not feel. Instead, he sought to wield his trademark empathy in validating those concerns.

The television audience is going to likely be Biden’s best opportunity to spell out what he and Democrats stand for this year.

He did it from a weakened political position, with near-record low approval ratings and the fate of his domestic agenda in question. In his speech, Biden made ample mention of the bipartisan infrastructure law that passed last year, something he expects Democrats to tout on the campaign trail this year.

Biden also heralded his nomination of Judge Ketanji Brown Jackson to become the first Black woman on the Supreme Court, a historic selection that could galvanize voters this year.

And he sought to address a spike in crime by calling for new gun laws while deflecting a longtime Republican accusation: “We should all agree the answer is not to defund the police. It’s to fund the police,” Biden said, generating some of the loudest applause of the evening.

What Biden made no mention of, however, was “Build Back Better,” the sweeping social and climate spending bill that failed to gain enough support for passage last year. Instead, the President called on Congress to send him various provisions included in that bill, most of which are widely popular among the American people.

He gave it a new moniker: “Economists call this increasing the productive capacity of our economy. I call it building a better America,” he said.

The White House had once hoped to unveil a new Covid strategy ahead of Biden’s State of the Union, meant to outline a phase of the pandemic that involves fewer disruptions to daily life while preparing for the unpredictable potential of another game-changing variant.

The plan, delayed somewhat by the Ukraine crisis, will now be released on Wednesday. In his speech, Biden still worked to emphasize the new approach.

“Tonight I can say we’re moving forward safely back to a more normal routine,” Biden said. He said it was not a matter of living alongside the virus but continuing to battle it, and said most Americans could now remove their masks and return to work.

Unlike last year’s address to a joint session of Congress, lawmakers were not wearing masks. And Biden did not speak against the backdrop of a masked House speaker and vice president.

But what Biden suggested was needed more than a strategy was a national reckoning.

“We have lost so much to Covid-19. Time with one another. And worst of all, so much loss of life. Let’s use this moment to reset,” he said. “Stop looking at Covid-19 as a partisan dividing line. See it for what it is: A God-awful disease.”