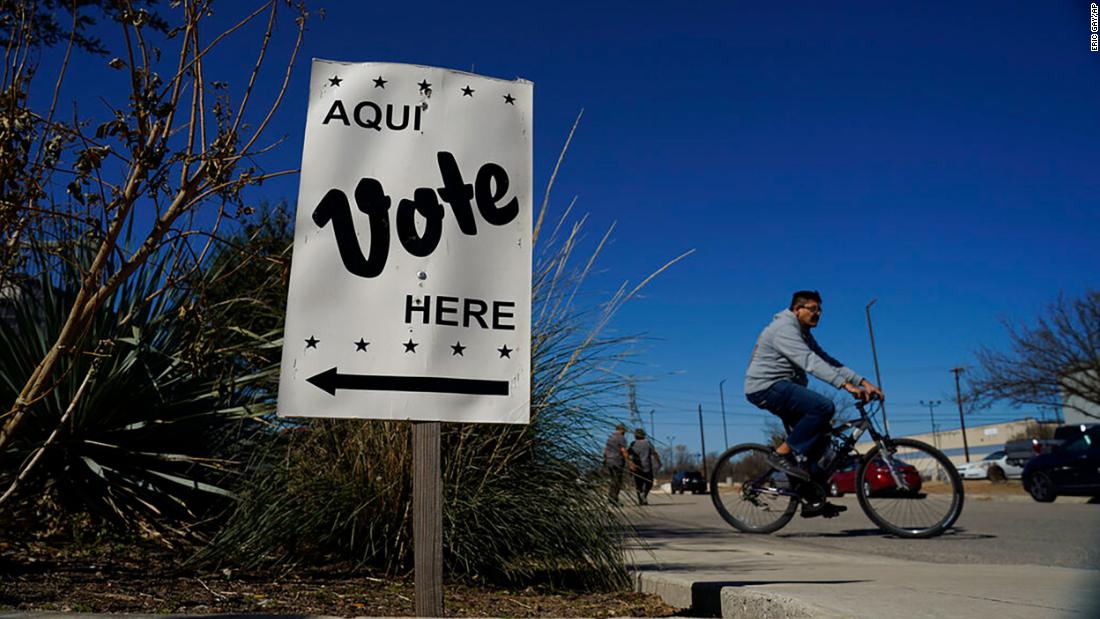 Two big-name Republicans, Gov. Greg Abbott and Attorney General Ken Paxton, will seek to beat back challenges from the right. In South Texas, the most conservative Democrat in the US House, Rep. Henry Cuellar, is attempting to survive a rematch against Jessica Cisneros, the progressive who nearly ousted him in the primary two years ago.

One important wrinkle in Texas: To win the primary, candidates do not just have to beat their rivals but must win more than 50% of the vote. Otherwise, the top two finishers advance to a head-to-head runoff election on May 24. That threshold could play an important role in several House primaries.

Texas is among the slew of Republican-dominated states that, amid former President Donald Trump’s lies about widespread voter fraud, enacted a new law that makes voting by mail more difficult and outlaws some options – such as drive-through and 24-hour early voting – that large Texas counties had used in 2020.

Tuesday’s primary will be the first election to take place under the restrictive new law. And operatives and activists across the nation will be watching closely to see how the law affects primary turnout.

Already, there are signs that many more votes than usual will be turned away. Large Texas counties reported unusually large numbers of rejected mail-in ballots due to confusion over the state’s new identification requirements for those ballots.

Though other states with new voting laws, including Arizona, Florida and Georgia, have implemented different restrictions, many are similar to what Texas enacted, turning Tuesday into a first run that could offer a preview of what’s to come in those states’ primaries, as well.

Can progressives change the narrative in South Texas?

Jessica Cisneros, a 28-year-old immigration attorney, came within a few points of ousting Democratic Rep. Henry Cuellar in their 2020 primary.

Now, with Cuellar under investigation by the FBI, progressive groups like Justice Democrats, which recruited Cisneros to run, are increasingly optimistic about their chances of defeating the long-time incumbent and lone remaining House Democrats to consistently vote against abortion rights bills.

Progressive heavyweights Sen. Bernie Sanders of Vermont and Rep. Alexandria Ocasio-Cortez of New York have both endorsed Cisneros, but recent ads from her campaign and its allies have focused on Cuellar’s potential legal issues. One TV spot from Cisneros splices together news reports about the FBI probe. Cuellar, meanwhile, ran an ad titled, “Do not believe her lies,” which attacked Cisneros as insufficiently supportive of border security.

Victory for Cisneros, in a district that covers a long stretch of the southern border but also extends as far north as San Antonio, would be a massive one for progressives, who were put on the back foot when Republicans, including Trump, outperformed expectations in South Texas in 2020.

Big GOP race might not be settled on Tuesday

Texas Attorney General Ken Paxton, a two-term incumbent, could be forced into a GOP primary runoff if he does not win a clear majority on Tuesday night.

And with recent polling showing him falling short of that threshold, the big question in this very expensive race is which of the three challengers is most likely to advance to a potential one-on-one contest.

Paxton, Trump’s endorsed candidate, is running under a cloud of ethics concerns, including an unresolved 2015 indictment for securities fraud and more recent allegations, lodged by a group of his own (now former) top aides, that he abused his office. Paxton has denied any wrongdoing, but his primary opponents have sought to use his existing legal troubles – and the possibility of more to come – to undermine his bid for a third term.

If he does not win the nomination outright, Paxton will face either Land Commissioner George P. Bush, former state Supreme Court Justice Eva Guzman or US Rep. Louie Gohmert – all three of whom are well-funded with strong political brands across the state

Heavyweight governor’s race to be teed up

Republican Gov. Greg Abbott is seeking a third term. And though he faces primary challengers – including Don Huffines, a former state senator, and Allen West, a former Florida congressman and former chairman of the Texas Republican Party – he is the heavy favorite to secure the GOP nomination.

Abbott is on a collision course with Beto O’Rourke, the former Texas congressman whose near-miss in the 2018 Senate race rocketed him to Democratic stardom, but who fell back to earth after a failed 2020 presidential primary run.

Texas is a Republican-leaning state and economic and historical factors suggest 2022 will be a favorable year for the GOP. O’Rourke, though, argues that Abbott’s management is to blame for the widespread power outages during the 2021 winter storm in Texas and for the GOP’s focus in the state on cultural issues – including passing a law that effectively outlaws abortions after about six weeks of pregnancy

When Texas lawmakers redrew the state’s congressional districts last year, they effectively turned swing districts into a thing of the past. Battlegrounds were turned into safe seats, some for Republicans and some for Democrats.

That’s made the primaries the most intense competition for seats in the US House.

Republicans Reps. Dan Crenshaw, of Texas’ 2nd District, and Van Taylor, of the 3rd District, face challengers who argue they are insufficiently conservative and have not been supportive enough of Trump.

In two open-seat races that favor Democrats, two leading contenders – former Austin City Councilman Greg Casar in the 35th District, who, like Cisneros, has been endorsed by Ocasio-Cortez and Sanders, and state Rep. Jasmine Crockett in the 30th District – are all but certain to lead the pack, but the key question is whether they will cross the 50% threshold to avoid a runoff.