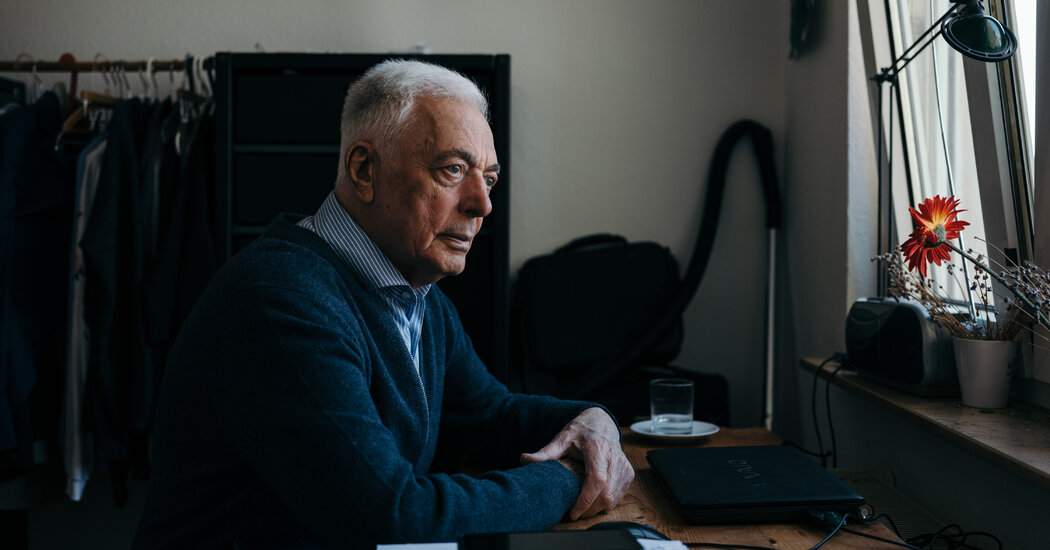 Borys Zabarko was six years old when the Nazis invaded what is now Ukraine in 1941 and his hometown, Sharhorod, became a Jewish ghetto. Women, children and old men slept in packed rooms with no bathrooms or water, he said. As typhus epidemics raged, the ground was too cold to dig graves, and bodies were thrown on top of each other. Mr. Zabarko’s father and uncle, who fought with the Soviet army, died in combat.

After the liberation, Mr. Zabarko said he became convinced that nothing like that would ever happen again.

Now 86, he spent a recent night in the freezing train station in Lviv, in the west of Ukraine, standing on a crowded platform, as he tried to get on a train to escape another war.

“It’s a frightening repeat,” he said by phone from Nuremberg, Germany, where he fled with his 17-year-old granddaughter, Ilona, ​​before eventually settling in Stuttgart. “Again, we have this murderous war.”

Most Ukrainians watched in shock in recent weeks as their country was hit by violence and destruction on a scale they had never seen before, with children killed, mass graves, and bombing of homes and hospitals.

For some older Ukrainians, Russia’s invasion has revived painful memories of World War II, in which more than five million people were killed in Ukraine, even if the toll and scale of the current conflict is incomparable.

Echoes of the world war have been omnipresent since the Russian invasion of Ukraine.

Dumskaya.net, a news website in Odessa, ended articles with a sentence adapted from one that local newspapers used during World War II. Instead of “Death to the German occupiers,” it now read “Death to the Russian occupiers.” An anti-tank hedgehog that was used in 1941 was pulled out of a museum and deployed to a street in Kyiv.

President Volodymyr Zelensky of Ukraine, the grandson of a Red Army veteran, repurposed language from that conflict, describing a “patriotic war” underway, a reference to the Great Patriotic War of the Soviet Union against Nazi Germany.

For Ukrainians, “World War II is the single most unifying emotional touchstone,” said Markian Dobczansky, a historian at the Harvard Ukrainian Research Institute. While the Ukrainian state is evoking those memories, the Ukrainian people also “make that connection on their own,” he said.

Alexandra Deineka, 83, was three years old when she lost three fingers after a bomb hit her house in Kharkiv. This month, the house, in which she still lives, was bombed again, and part of her roof destroyed. “The same story as many years ago,” said her grandson, Dmytro Deineka, “the same, same.”

When Mr. Zabarko heard air-raid sirens on a recent morning, he ran for an underground garage. There, he found people who had slept the night, hiding from the missiles and bombs dropping on the city, including mothers with children in strollers who were afraid to leave. His mind immediately went back to 1941.

“The feelings are the same,” he said, “it’s death that flies above you.”

After spending days sheltering in his apartment, his granddaughter was suffering from unbearable anxiety, he said, and his daughter begged him to take her out of Ukraine. They both got sick with Covid, after traveling by train in overcrowded carriages.

“We believed that we and our children and our grandchildren would live a peaceful life,” he said, “and now there is another war with people dying, blood spilling.”

After Germany invaded what is now Ukraine, it ceded the region of Transnistria to its ally in Romania, which deported thousands of Jews to Sharhorod, confining them there.

After the war, Mr. Zabarko became a historian, wrote books about the Holocaust and headed an association of survivors. Now, he feels as if his life’s work had fallen on deaf ears.

He added: “For many this is the first time, but we know what war leads to, we lived through it.”

Among those victims were the aunt and grandmother of Svetlana Petrovskaya, who had fled Kyiv with her mother after the Nazi invasion.

On March 1, The Babyn Yar Holocaust Memorial Center in Kyiv said that Russian forces had struck the site.

Eighty-two years later, Ms. Petrovskaya left Kyiv on a bus with older people and children, ending up in Budapest, after gathering her jewels, some books of poems, her late husband’s pipes, and letters he had received from his former students.

“I am a strong person and I did not cry when my husband died but I burst into tears when I left Kyiv,” she said. “It was so much like 1941.”

After spending hours in the bomb shelters as shells hit near her house, Ms. Petrovskaya overcame her initial reluctance and agreed to leave Kyiv in early March.

“I never, ever thought I would become a refugee again,” she said, “I want to be buried next to my husband.”

In the 1940s, local collaborators helped the Nazis perpetrate the Holocaust but most Ukrainians, or about three million, fought in the Red Army against the Nazis.

One of the fighters was Ihor Yukhnovskyi, a physicist and former Deputy Prime Minister of Ukraine. Mr. Yukhnovskyi grew up under Polish rule in what is now Western Ukraine and lived under Soviet and then German occupation.

“Ukrainian people did so much during World War II; Russia owes Ukraine a great debt, ”Yukhnovskyi, 96, said in by phone from his house in Lviv. “It’s very sad that the president of Russia does not have a basic form of respect.”

In 1991, he was a Member of Parliament advocating for Ukraine’s independence. Now, his grandson has been conscripted to fight.

“To think that we will give that up is completely absurd,” he said.

Ida Lesich and her mother were among the more than two million people whom the Nazis sent to labor camps in Germany. In 1943, her mother died in the camp after months of breaking rocks, and Ms. Lesich grew up in an orphanage in Kyiv.

In a phone call from Kyiv, which she is refusing to leave, Ms. Lesich, 85, said that for all her life she had stored away memories of the war. But as bombs started falling on Ukraine, they came back.

“Putin does not treat people like people,” she said. “He is killing the innocent.”

When she was 22, Maria Stasenko’s husband was enlisted by the Soviet army. She and her four-year-old son stayed in Dnipro, even as her house was occupied by German soldiers. Now her grandson is the one preparing to fight.

“I am living through my third war,” Ms. Stasenko, 102, who was born just after the end of World War I, said in a phone call from her house outside of Dnipro. “I never thought there would be another one.”

During World War II, Ms. Stasenko volunteered in her city, helping repair destroyed train tracks. Now, like many of the war survivors, she is too old to escape, unable to seek refuge, trapped with their memories and fears. “I’m not sure I’m going to make it this time.”