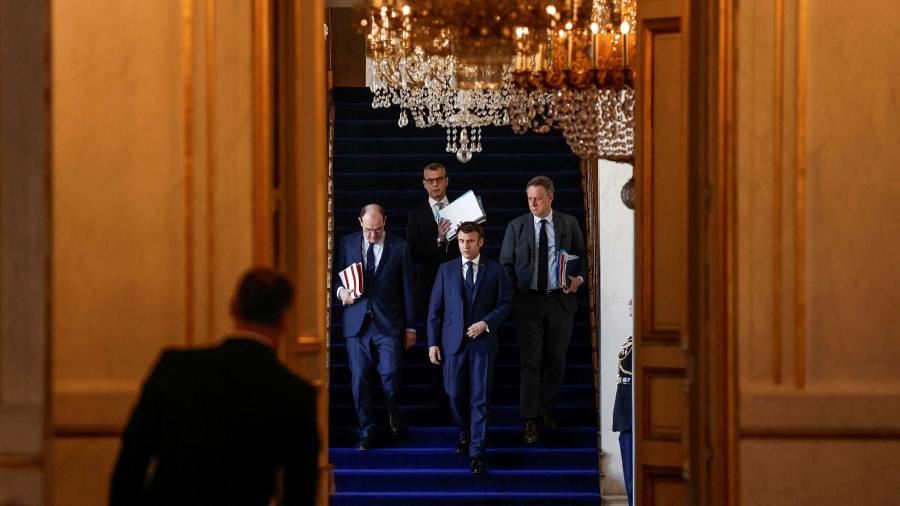 Emmanuel Macron is set to confirm this week that he will be a candidate in next month’s French presidential election, with polls and political commentators suggesting that the war in Ukraine has further boosted his status as a favorite to win another five-year term.

Macron, first elected in 2017, is expected to declare his candidacy without fanfare before Friday’s deadline to underline his preoccupation with urgent state affairs.

With some rival candidates facing scrutiny over their previous sympathy for Vladimir Putin, Russia’s president, Macron is benefiting from his prominence in western efforts to deter Russia and resolve the conflict.

“There is very little chance that Macron would not be re-elected in a month,” said Vincent Martigny, politics professor at Nice University, in a discussion this week with the Association of European Journalists. “Macron is not really the best, he’s the only one.”

Macron engaged in intense if unsuccessful attempts to persuade Putin to call off the war in a long face-to-face meeting in the Kremlin and numerous telephone calls. Some critics have called him naive, but his supporters are giving him credit for the last-ditch diplomatic attempts to avert war in Europe.

Although foreign affairs are not usually a decisive factor in French politics, Mujtaba Rahman, managing director for Europe for the consultancy Eurasia Group, agreed that Macron’s prominence on the world stage has boosted his ratings.

“It’s a home run now for Macron,” he said. “There’s no desire to remove a sitting president in the middle of a war on our continent.”

Macron’s insistence on the need to reinforce the EU’s economic and strategic autonomy in the face of rival world powers has also been dramatically vindicated.

In the past week, the Russian attack on Ukraine triggered a sudden policy shift by Germany and the EU towards more defense spending and military co-operation of the sort long recommended by France. The Covid-19 pandemic had already exposed Europe’s dependence on imported medical equipment and prompted the EU to adopt a France-inspired € 750bn joint recovery plan.

A Harris opinion poll this week on how French voters view the war found that 58 per cent of respondents thought Macron had been fully or fairly equal to the challenge of the Ukraine crisis – double or more than double the percentages for his main rivals. They include the far-left Jean-Luc Mélenchon, Marine Le Pen and Eric Zemmour on the far right, and the conservative Valérie Pécresse.

An added bonus for Macron in a country that shows overwhelming support for Ukraine is that three of his main rivals – Mélenchon, Le Pen and Zemmour – have a history of openly admiring Putin and had accused the west of exaggerating the threat of an invasion. Zemmour even said once that he would dream of a “French Putin” to revive the nation.

However, analysts said the “pro-Putin” labels, and the U-turns by Macron’s rivals in condemning the Russian leader’s invasion now that Ukrainians are being killed, are unlikely to reduce their standing in the polls by more than a couple of percentage points . And Mélenchon has continued rising in the polls even since Putin launched the invasion.

An Elabe poll published on Tuesday shows Macron maintaining his longstanding lead with 25 per cent of voting intentions for the first round on April 10, followed by Le Pen, Zemmour, Mélenchon and Pécresse with 17, 14, 12.5 and 12 per cent, respectively. Macron would also win the second-round run-off on April 24 against any rival, with Le Pen being his strongest challenger, the poll suggests.

Even before the war, polls showed that Macron was already on course for victory. Tax cuts and labor reforms enacted before the pandemic had already produced results, including more interest from foreign investors and a drop in unemployment to 7.4 per cent, now at its lowest for more than a decade.

And Macron’s “whatever it costs” strategy for dealing with the economic damage from Covid-19 succeeded in saving businesses and jobs and in restoring French output to its pre-pandemic level before most of its European neighbors. Just as the coronavirus crisis in early 2020 finished off the yellow gilets anti-government protests that had thrown Macron’s presidency off balance for the previous 18 months, so the Ukraine war this year has overshadowed concerns about immigration, Islamism and crime that had been exploited by Zemmour and others on the right.

Pécresse has pointed out the dangers of soaring public sector deficits and debt under Macron, and promised to cut 150,000 jobs from a civil service employing more than 5.6mn people. But other candidates are betting that most French voters remain indifferent to the state of public finances and as attached as ever to free public services and generous social security benefits.

Only inflation and the sharp rise in energy prices as a result of war – diesel and petrol now cost more than when a green fuel tax prompted motorists to don their yellow vests and protest back in 2018 – pose a serious risk to Macron, but he has spent more than € 15bn on subsidizing energy for homes and easing the cost burden for drivers.

Surprises are always possible in French elections. France’s leftwing parties, now scattered and weakened, could unite behind a candidate such as Mélenchon. Or a scandal might have killed one of the candidates – and boosted the other contenders – as it did Les Republicains’ François Fillon in 2017, whose campaign was hit by revelations that he had paid his wife for fictitious parliamentary work. He was convicted of fraud over the scandal in 2020.

For now, the Ukraine war has confirmed Macron as the frontrunner. The weekly French news magazine Marianne, not known for its pro-establishment views, said in the headline for the cover story of its latest edition above a picture of all his rivals: “It’s not that Macron is so great – it’s that this lot are so useless. ”