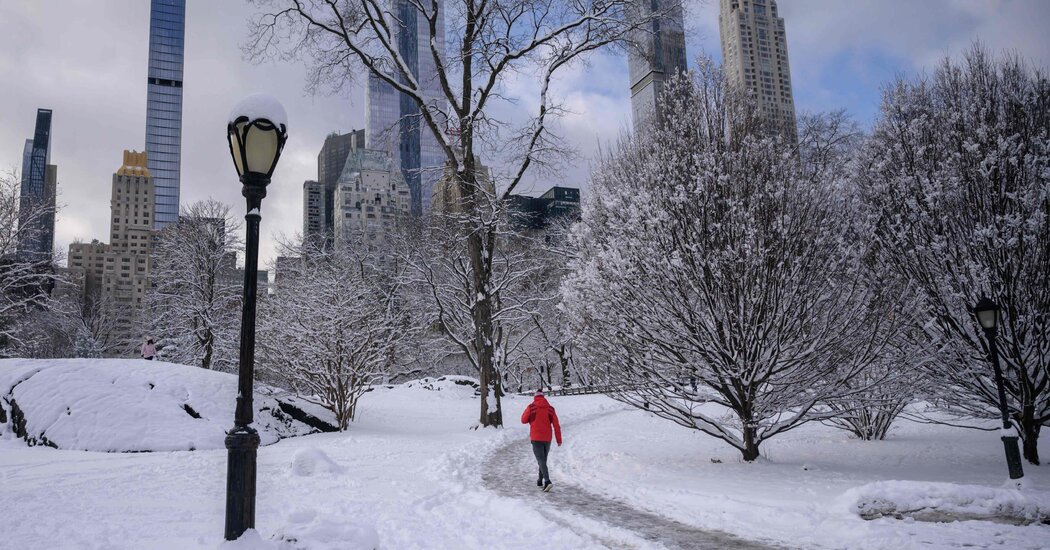 When Mayor Eric Adams named a commissioner last week to oversee New York’s parks department, he spoke of how important the city’s green spaces were for recreation and contemplation, especially during the pandemic.

But he also acknowledged having no particular agenda or master plan for the more than 30,000 acres of parkland under his control.

The city’s five borough presidents are now joining forces to give him an idea: On Monday, they will ask Mr. Adams to plant a million new trees by 2030, a revival of an ambitious and successful “million trees” initiative that started under former Mayor Michael R. Bloomberg, and was completed under his successor, Bill de Blasio.

The borough presidents will also ask Mr. Adams to honor his campaign pledge to devote 1 percent of the city’s budget to the parks department, which they describe as chronically underfunded.

About 22 percent of the city is covered by tree canopy. The figure has increased about 2 percent in recent years, a development that the Nature Conservancy, an environmental advocacy group, said is likely attributable to the growth of existing trees and the prior million-tree program.

The earlier effort was part of a broader strategy by Mr. Bloomberg to create new parkland while making the city more resilient to the effects of climate change.

Borough presidents typically do not wield much in the way of formal power, as Mr. Adams, the former Brooklyn borough president, can attest. But the position does provide a bully pulpit, and the five current borough leaders are betting that they can wield more influence together than individually. This initiative is the first test of that proposition.

“A lot of people are tired of polarizing politics and fighting over everything,” said Vito Fossella, the Staten Island borough president. He is the lone Republican among the five, and the only one to be endorsed by former President Donald J. Trump. “Let’s change the focus on where we can work together.”

New York now has roughly seven million trees, or fewer than one tree for each of its 8.8 million residents, according to a recent Nature Conservancy report. About 650,000 trees line the streets, but they are not evenly distributed – much like the parks themselves.

The Trust for Public Land, a conservation group that helps create public parks across the United States, found that low-income New Yorkers and people of color have significantly less available park space than residents of neighborhoods that are mostly white and wealthy.

The allotment of trees somewhat follows that pattern. Vanessa Gibson, the Bronx borough president, noted that while the Riverdale neighborhood and the area around it have a higher-than-average tree density, sections of the South Bronx like Hunts Point have less than their fair share.

London planetrees predominate, as do honey locusts, pin oaks, Norway maples and Callery pears, the latter known for their clusters of white flowers.

It is estimated that the streetscape could accommodate 250,000 more trees; the rest of the new plantings would be in parks and other green spaces controlled by city, state and federal agencies or by private partners.

The borough presidents have been speaking for about a month, Mr. Fosella said. They communicate via five-way text. Although their political views run the gamut, they have discovered that they can agree on at least one thing: Trees are good, the more the better.

Mark Levine, the Manhattan borough president who led the City Council’s parks and health committees as a member of the body, proposed the idea, which has an estimated cost just above $ 500 million.

Among their other benefits, trees absorb storm water and carbon dioxide and provide shade in summer and their density has a measurable effect on the surrounding air temperatures. City health department statistics indicate that 350 people in New York die each year because of heat-related causes – more than the number of those who die in traffic crashes. Heat-related deaths are only expected to increase with climate change.

Chief Counsel: Brendan McGuire. After a stint as a partner in a law firm’s white-collar practice, the former federal prosecutor returns to the public sector to advise the mayor on legal matters involving City Hall, the executive staff and administrative matters.

“We lose hundreds of New Yorkers a year from extreme heat, far more than we lose from cold,” Mr. Levine said. “And the rate of death from heat among African-American New Yorkers is double the rate among white New Yorkers.”

Exposure to nature has also been shown to reduce stress. During the worst parts of the pandemic, the city’s parks provided one of the few safe respites.

“People are seeing how valuable our open space is and how valuable our tree canopy-covered streets are,” said Nelson Villarrubia, the executive director of Trees New York, a group that works to protect the urban forest. He said that since the pandemic, the organization has seen an uptick in interest in its classes for teaching volunteers how to care for city trees.

In some way, the parks department is better prepared to mount a major tree-planting initiative now than it was two decades ago.

Thanks to the first million trees initiative, the department changed several policies related to tree planting. The city, for example, no longer requires a landlord’s consent before planting in front of a building.

The department has also learned to rely less on certain tree species whose roots frequently upend sidewalks, including Norway maples, a parks official said. Instead, the department has been experimenting with new species, like the Kentucky coffeetree.

The department also no longer relies on tree-planting contractors to supply saplings – an arrangement that gave contractors an incentive to use cheaper trees. Instead, the department manages separate contracts with tree nurseries.

With Mr. Adams making healthy living a major component of his agenda, Donovan Richards, the Queens borough president, argued that the tree initiative was a natural for the mayor to embrace.

“This ties into everything he’s talking about,” Mr. Richards said. “Having a healthy eating lifestyle is great, but having a healthy open space is just as good.”

Kate Smart, a spokeswoman for Mr. Adams was noncommittal. She said the mayor was committed to earmarking 1 percent of the city budget for parks – a pledge he described last week as one of several “long-term goals” – and was also exploring innovative ways to invest in quality green spaces for all New Yorkers. ”