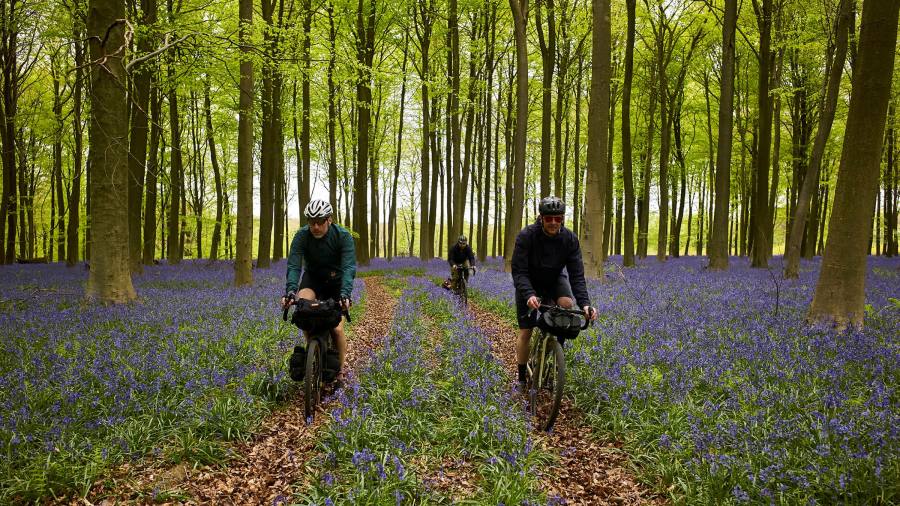 In April 1884, an Englishman named Thomas Stevens strapped bags to his penny-farthing and packed a spare shirt, a wax raincoat that doubled as a tent, a bedroll and a revolver for fending off bandits. As the grocer pedaled across America – and then Europe and Asia – to become the first cyclist to ride around the world, he was launching a trend almost 150 years before its time.

In early May 2022, another Englishman – me – is loading up a modern bicycle with, among other things, battery packs, a titanium spoon-fork hybrid (a spork) and a Gore-Tex jacket. My own expedition is a less intrepid circumnavigation of east Kent, for which I am unlikely to need a gun.

I am bikepacking, the latest buzzword in cycling’s long evolution. The offspring of cycle touring (think panniers fixed to stately road bikes) and mountain biking, it reaches back towards Stevens’s era of true adventure. Bikepackers seek to roam as freely as their backpacking counterparts. Yet it also looks forward into an industry arms race that is producing ever more sophisticated bikes, bags and kit.

I meet my guide in a pub car park in Wye, a village near Canterbury. Stef Amato, a former architect with thick black hair and a rugby player’s build, is the founder of Pannier, an adventure travel company that grew out of the blog he started in 2012. He is most at home navigating high mountain passes but this week we ‘re taking on the Cantii Way, a new 150-mile loop of tracks, bridleways and quiet roads mapped out by Cycling UK, a charity, with EU funding secured just before Brexit. It is due to launch on May 26, when a guidebook and downloadable route files will be available online.

The route, named after a once local Iron Age tribe, will be exploratory for me. I’m a stranger to the chalk cliffs and fishing villages of Kent’s eastern tip, though getting to Wye from central London could scarcely be easier (the village is five miles from Ashford station, which is served by trains from St Pancras that take just 37 minutes). For a camping novice – I’d go as far as to say skeptical – this could not be a gentler introduction to bikepacking. As I roll into a rain shower with Amato and a couple of other riders here to trial the route, I’m wondering if it’s possible to experience a sense of escape in one of England’s most populous counties.

When Amato, 35, started adventure cycling as a penniless student, he wrapped his stuff in bin bags and strapped it to a £ 350 road bike. Everything got wet and his skinny tires were all over the place, but he was hooked. “I just got that sense of freedom to explore fast enough to go places but slow enough to take it all in,” he says.

Today I’m borrowing a £ 4,000 carbon gravel bike made by Pearson, a London bike shop that Stevens may have frequented (the Pearson family has run it since 1860). Gravel bikes, another recent trend, are do-it-all machines with chunky tires and drop handlebars. They are designed to be as stable and nippy on country lanes as they are on all but the roughest mountain trails.

There’s a burgeoning market for bikepacking bags too, as well as clothing and adventure cycling shoes. Boutique and established cycling brands are racing to woo a market that has recently sprinted from niche towards the mainstream (I now frequently see little bikepacking bags strapped to the handlebars of otherwise impeccably aerodynamic £ 10,000 racing bikes).

A triangular pack made by Leeds-based Restrap fills the middle of my bike frame. My sleeping bag and mat are in a big sack on my handlebars, with smaller bags containing my tent on my front forks. Another sausage of a bag slips into a clever holster behind my saddle. My laden bike must be three times the weight of my usual road bike but I soon forget it; the load is spread out evenly and the bike itself is very light.

Either way, it’s clear I’m not going to be averaging a high speed. And that’s the point; Pannier, whose trips include rides in Scotland and from London to Bristol, as well as a journey across the Tian Shan mountains of Kyrgyzstan, describes itself as the “15kph club”. That’s the gentle pace its rides tend to run at. “It’s about the experience of place rather than speed or technical difficulty,” Amato says.

Soon after setting out on the Cantii Way, we dive into King’s Wood along a forestry road. A cerulean sea of ​​bluebells stretches further than I can see in the dappled shade of grand oaks and beeches. Ordinarily, while riding on my road bike, I admire flora only fleetingly. Here, I silently prop my gravel machine against a tree and marvel at the sight.

I catch my first glimpse of the sea in Whitstable. We shuck oysters and have a beer at a beachfront shack, before fish and chips further along the coast. It’s getting dark and cold as I pedal along the sea wall towards Minnis Bay. The sea to my left is calm, the beach deserted. From nowhere, a train glides through the gloaming across the marshy fields to my right. Even from a distance I can make out each passenger in the brightly lit carriages. Seagulls circle, looking for places to rest. It’s a beautifully eerie end to day one.

The bikepacking dream is to pitch a tent spontaneously on the side of some stunning mountain. The reality is that, in England and Wales at least, wild camping is generally illegal without seeking prior permission, though I gather illicit bivvying does happen. Not today; in complete darkness, we throw up our tents at a dewy campsite behind an equestrian center and bed down. I’m grateful at least for the heated toilet block.

I sleep better than expected and rise to find Amato balancing a porridge pan and a moka pot on his stove. It starts to rain as we pack up. Soon, as we ride along a muddy track, we encounter another challenge of adventure riding: access, or the lack of it. Needing to cross the railway line, we find only padlocked farm gates and have to hoist everything over them.

Bikepackers have joined a growing campaign to improve access to privately owned land. It can be a delicate process. Later, after a sandwich in Sandwich and a trundle down a valley called Otty Bottom, the official route continues a few miles via road to Dover. Cycling UK is negotiating instead for access to a section of wide footpath that runs past the Foreland Lighthouse along Dover’s famous white cliffs. The National Trust, which owns the land, apparently supports the minor change, but these things involve lengthy consultation and costings for new signs, maps and gates.

Similar constraints mean that the Cantii Way is not signed at all. The same is true of many long bikepacking routes. Instead, maps and GPS files are increasingly being shared on sites such as Bikepacking.com, Strava and Komoot, from where they can be downloaded and then followed on a bike computer. Researching and swapping routes, usually for free, has become a focus for the growing bikepacking community online. Amato is a paper-map-and-compass guy by nature, but now uses a computer on the go. “I’m happy to give out GPS files, but with remote stuff it’s important to make sure you know about the climate and where to get food and water,” he says.

Guided bikepacking is a niche market that Amato expects to boom soon. Pannier is due to add more trips in the coming months as it climbs out of Covid hibernation (Nepal and Bosnia are on the hit list). Events are also growing in popularity. In 2019, Amato rode in the unsupported Silk Road Mountain Race, a punishing 1,100-mile route in Kyrgyzstan. The slightly longer annual GBDuro event is a race from Land’s End to John O’Groats.

I ride the technically still forbidden path until Dover’s vast ferry port appears below me. It reminds me once more of Thomas Stevens who, after crossing America, sailed to Liverpool then rode to Newhaven for the ferry crossing to France. Dozens of cyclists accompanied him, inspired by his pluck and derring-do.

After dropping into Dover, we are soon climbing again on a quiet bridleway. A queue of cross-Channel lorries held up by Brexit paperwork snakes for miles up the A20. After a wine tasting at Terlingham Vineyard on the rolling North Downs, day two ends in Folkestone. With excellent timing, Amato has treated us to a hotel. The rain lashes the beach as I enjoy crab and langoustines at Little Rock, a fine restaurant made of old shipping containers.

The skies finally turn blue for our 55-mile ride to Rye on day three. Soon, we are in Dungeness, a vast and forbidding headland of shingle and marsh. Latterly an unlikely hotspot for creatives and their modernist black holiday villas, it’s so exposed and seemingly arid that it could almost pass for New Mexico. A hulking nuclear power station, a miniature steam train and an army firing range only add to the otherworldly atmosphere.

We wheel our bikes on to the golden beaches at Camber Sands, where we have an ice cream and a chilly dip. At Rye, with its cobbled hills and Tudor houses, we drink ale in the evening sun at the 15th-century Mermaid Inn. We camp nearby after a fish pie at another lovely pub.

I will not pretend that the Cantii Way is all charming inns and succulent seafood. I also shiver while wolfing down a sandwich outside a gas station in Dover. I have to dodge bottles of suspiciously yellow liquid that have apparently been hurled on to a neglected cycle lane from the lorries hurtling along the A256. Escape is a relative concept when you’re riding among motorways, ferry ports and nuclear power stations.

None of which would have troubled Stevens as he continued his journey to the Middle East and Asia. Cycling of any sort was then still a novel pursuit, and the newspapers were agog. “How the world shrinks and what a prospect does the adventurous cyclist open up before the eyes of wheelmen!” London’s Pall Mall Gazette said of Stevens in October 1885. “If a bicyclist can trundle his way over Ararat and the Himalayas, what corner of the world will be left unvisited by the silent riders of the iron steed?”

Stevens was a bikepacking influencer, just as Amato is today on his steed of titanium. As I roll back into Wye after four days on the Cantii Way, I can only dream of the more remote adventures I may now seek out. But I will remember my loop of Kent, with its late-spring blooms, wide skies and some of England’s loveliest villages and beaches. I’ve even enjoyed camping, and have barely looked at my phone. As I return to London, I’m reminded that, even today, discovery can take place on one’s doorstep.

Simon Usborne was a guest of Cycling UK and Pannier. A guidebook to the Cantii Way and GPX files of the route will be available from May 26 at cyclinguk.org/cantii-way