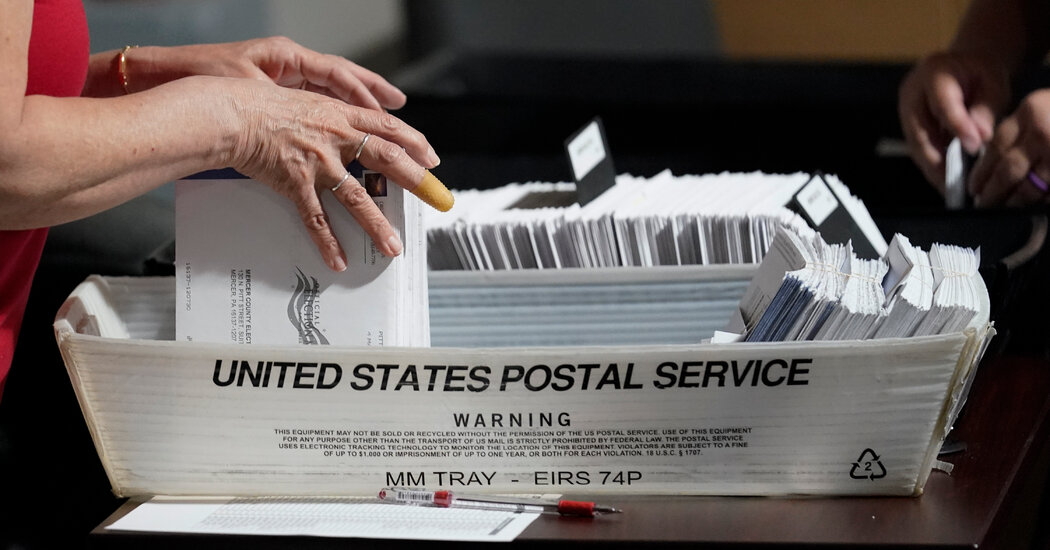 The Republican primary for Senate in Pennsylvania is about to get even wilder.

The campaigns for David McCormick and Dr. Mehmet Oz, that election’s top two finishers, are obsessively monitoring the steady drip of numbers coming from the secretary of state’s office as well as from key counties.

As of early Thursday evening, McCormick, a former hedge fund executive, and Oz, a celebrity surgeon who was endorsed by Donald Trump, were separated by a little over 1,000 votes, although the statewide results often lag the results in individual counties. Election officials have not yet declared a winner, and are not likely to do so anytime soon. Both campaigns are preparing for the possibility of a bruising recount.

So, apparently, is Trump, who urged Oz to “declare victory” on Wednesday in a post on his Truth Social website.

“It makes it much harder for them to cheat with the ballots that they just happened to find,” Trump added, though no evidence has emerged of any wrongdoing by the McCormick campaign or its allies.

On a background call with reporters on Thursday, a senior official with the McCormick campaign argued that the combination of outstanding votes in several counties, plus military ballots that are yet to be counted, would put McCormick ahead. The official said the campaign believed there were more than 15,000 absentee ballots still uncounted, adding that the McCormick operation had invested heavily in its absentee voting program.

“Facts show that the counting of valid absentee ballots is very likely to put @DaveMcCormickPA on top,” tweeted Mike Pompeo, a former secretary of state under Trump who is a top surrogate for McCormick. Both men are alumni of West Point, where McCormick was captain of the wrestling team before going on to serve in Iraq as a member of the 82nd Airborne Division.

The Oz campaign likewise is projecting victory, citing the fact that Oz led McCormick in the official statewide count as of Thursday afternoon. But the gap has narrowed since Tuesday.

The office of the Pennsylvania secretary of the commonwealth estimated that there were about 8,700 Republican absentee and mail ballots to be counted as of Thursday evening, a spokeswoman said in an email. Counties are required to report their unofficial results by 5 pm on May 24.

McCormick leads by nine percentage points among mail absentee ballots cast so far, according to an analysis by Nate Cohn of The New York Times. If he leads among the uncounted mail ballots by a similar amount – and that’s not assured, Cohn says, as late-arriving mail ballots can differ from early mail ballots – then McCormick could squeak ahead of Oz as early as Friday.

Pennsylvania law mandates a recount if the results of an election are within half a percentage point, and many close observers expect that might still be the case by next Thursday, the deadline for election officials to order a statewide re-examination of votes.

“It seems almost certain to me that the vote will be within 0.5 percent,” said Bruce Marks, a lawyer who in 2020 filed a petition for a writ of certiorari, on Trump’s behalf disputing the election results in Pennsylvania.

The McCormick campaign, meanwhile, recently hired a GOP operative known for his expertise in the dark arts of challenging election results.

According to federal election records, the McCormick campaign paid the operative’s firm, Michael Roman and Associates, $ 7,000 on April 21 for “consulting services.”

Roman was the director of Election Day operations for Trump’s re-election campaign in 2020, and he later played an instrumental role in advancing claims of voter fraud in Pennsylvania that courts repeatedly ruled were unfounded.

In February, Roman was issued a subpoena by the House committee investigating the Jan. 6 attack on the Capitol. The committee said it had obtained communications that showed his “involvement in a coordinated strategy to contact Republican members of state legislatures in certain states that former President Trump had lost and urge them to ‘reclaim’ their authority by sending an alternate slate of electors.”

Roman’s hiring suggests that McCormick’s campaign was gearing up for a potentially protracted fight even before Tuesday, the day of the primary. It also means that an operative who helped lead Trump’s effort to overturn the 2020 election results will now be pitted against a candidate endorsed by the former president.

Marks said he had not been hired by either campaign, though he is close to Roman. In 1993, Roman helped Marks overturn a Pennsylvania State Senate election after arguing that the results had been tainted by voter fraud.

The full scope of Roman’s duties was not immediately clear as of noon on Thursday, although two people familiar with his hiring said he had been brought on at least in part to help with the possibility of a disputed result. Roman did not respond to a request for comment by publication time.

Asked about Roman’s responsibilities, Jess Szymanski, the press secretary for the McCormick campaign, said only, “We’ve got a lot of lawyers across the state.”

Under the radar, Mo Brooks rebounds

Representative Mo Brooks’s Senate campaign seemed dead in the water after Donald Trump withdrew his endorsement. But nearly two months after Trump’s change of heart and one week before the Alabama primary, Brooks should not be counted out.

In Alabama, a primary candidate must receive at least 50 percent of the vote to win the nomination. That’s unlikely to happen in this relatively crowded Republican Senate race, where the leading candidates are polling in the low 30s. The goal is to place in the top two before a runoff, which now seems within reach for Brooks.

Different pollsters show Brooks battling with Michael Durant for the second spot, with Katie Britt consistently in the lead. But recently, these polls also indicate that Brooks has improved his standing.

Shortly before Trump rescinded his endorsement in March, a Republican poll from The Alabama Daily News and Gray Television found Brooks lagging far behind in third place, with 16 percent. But a follow-up poll conducted in May found Brooks in second place with 28.5 percent. Separately, a poll from Emerson College and The Hill found Brooks improving his status from 12 percent in March to 25 percent in May.

“Mo Brooks has just kept making his case to Alabama that he’s the most conservative guy in the race and voters seem to have responded,” Stan McDonald, the chairman of Brooks’ campaign, said in a statement.

But part of Brooks’ recent success might be a result of something else. As his top two rivals spar, he has been on the receiving end of fewer television attack ads. Since April 26, candidates and outside groups have spent nearly $ 540,000 against Britt and $ 830,000 against Durant on broadcast television, according to AdImpact, compared to only $ 75,000 against Brooks.

And while Brooks might be improving, Britt has held a lead in every recent public poll.

“It’s clear from our strong momentum that Alabamians know that I am the best candidate to defend our Christian conservative values, fight for the America First agenda, and preserve the country that we know and love for our children and our children’s children,” Britt said in a statement.

Is there anything you think we’re missing? Anything you want to see more of? We’d love to hear from you. Email us at onpolitics@nytimes.com.