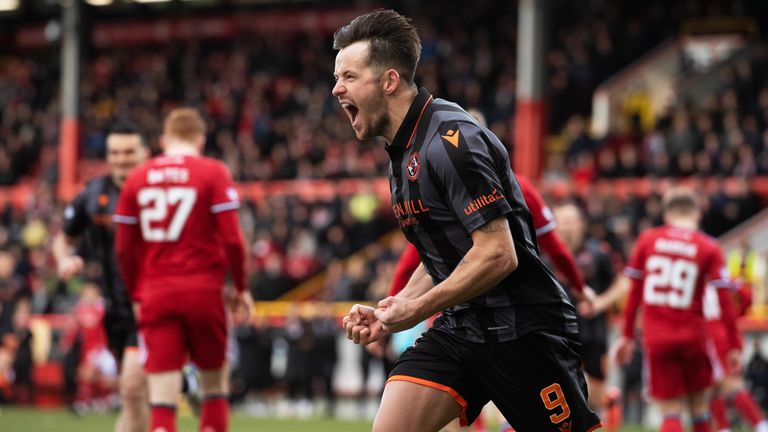 Jim Goodwin’s home bow as Aberdeen boss ended in a 1-1 draw as his side had to battle back from an early Mark McNulty penalty for a share of the points.

A Ryan Edwards own goal leveled matters, but the stalemate does little to help Goodwin’s side as they look to climb the Scottish Premiership table.

With Sir Alex Ferguson watching from the stands after having a statue dedicated to him at Pittodrie on Friday, and being presented to a capacity crowd before the match, the Dons could not have made a worse start.

David Bates clumsily challenged Ian Harkes in the box after just three minutes, and referee David Munro had no hesitation pointing to the spot, also booking Bates for his efforts.

McNulty coolly slotted into the bottom left corner as Joe Lewis went the other way.

The Dons were level after 16 minutes though as an incisive attack bore fruit.

Funso Ojo played in Vicente Besuijen on the right and Benjamin Siegrist did well to palm away his effort. The ball broke off Matty Kennedy and was eventually turned into his own net by the luckless Ryan Edwards in his attempts to clear.

And the Dons should have been in front within 60 seconds as Ojo played a delightful pass to Christian Ramirez on the penalty spot, but the usually-deadly American striker hit over the bar.

Ross Graham, who scored in United’s draw with Rangers last weekend, came close to finding the net again with a 20-yard volley that had Lewis at full stretch, but the goalkeeper was equal to the effort.

Aberdeen had another gilt-edged chance to take the lead when Kennedy’s neat pass found Besuijen on the six-yard line, but the winger went for power rather than accuracy and hit well over.

The Pittodrie wind broke up the flow of the second half, but Lewis Ferguson’s deflected shot almost caught out Siegrist five minutes after the restart, with the keeper doing well to re-adjust.

The same player forced another save from the Swiss goalkeeper, this time a low drive from inside the area beaten away.

And substitute Teddy Jenks was denied in the final minute of normal time as he struck a fine effort at the back post from a Besuijen cross, only for the strike to be blocked on the line.

Aberdeen travel to Hearts in the Scottish Premiership on Wednesday; kick-off 7.45pm. Dundee United make the trip to Livingston on the same day; kick-off also 7.45pm.