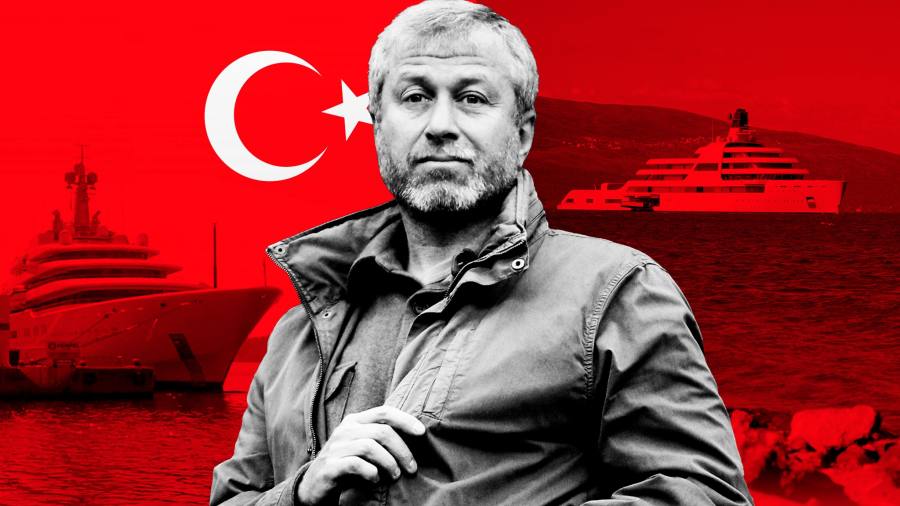 Roman Abramovich’s superyacht Eclipse arrived in the port of Marmaris this week, epitomizing in its 163 meter hull western concerns about Turkish reluctance to sign up to sweeping sanctions against Russia.

At a time when European governments have begun seizing yachts belonging to sanctioned oligarchs, the billionaire Chelsea Football Club owner appeared to view Turkey as a safe haven for Eclipse. Another of his vessels, the 140-meter Solaris, arrived in Bodrum on Monday.

Selim Kuneralp, a former Turkish diplomat, urged his country to be careful about welcoming these vessels, writing in the online outlet Serbestiyet: “These superyachts could become a headache for our government.”

Turkey, a NATO member that has also forged close ties with Moscow in recent years, has won praise from western leaders for its condemnation of Vladimir Putin’s invasion of Ukraine and for supplying armed drones to Kyiv. President Recep Tayyip Erdogan has also carved out a role as an intermediary between Putin and Ukraine’s President Volodymyr Zelensky.

Yet there is concern in European capitals that Turkey, and other countries such as the United Arab Emirates and Israel, could unwittingly or deliberately become a hub for Russian money – or for those seeking to bypass the sanctions imposed by western powers on Moscow. This could further strain ties between Ankara and the west. “It’s something we are watching closely,” said one European diplomat.

Ankara, which has sought to maintain what it calls its “friendship” with both Russia and Ukraine, has said repeatedly that it will not sign up to sanctions. Turkish officials argue that they will not work. Turkey’s allies have so far been forgiving of that stance – and have been ultra-cautious about criticizing Ankara in public.

“Europeans understand that Turkey has interdependencies with Russia,” said Ilke Toygur, a fellow at the German Institute for International and Security Affairs in Berlin. “It’s in a strategically difficult position, and it has a fragile economy and so it can not get on board with sanctions. This could, at least for now, give a free pass to Turkey when it comes to sanctions. ”

Toygur warned, however, that the pressure on Ankara could grow “if the war goes on longer, if the sanctions get harsher”.

Turkey has not traditionally been an investment destination for Russia’s oligarchs. But Abramovich’s private jet has repeatedly flown in and out of the country over the past month, according to airport tracking sites. Reuters news agency reported this week that the Russian tycoon wanted to invest in Turkey, citing an unnamed source in Ankara with knowledge of conversations with the billionaire.

For those without private jets, Turkey was one of the few remaining escape routes from Russia as most of Europe closed its airspace to Russian commercial flights in the wake of the invasion. Turkish carriers not only continued operating but also increased capacity to and from Russia by 12 per cent two weeks after the invasion, according to data from the travel analytics company ForwardKeys. That irked some European officials. “They see the crisis as an opportunity to make money,” complained one.

One EU official voiced concern that Turkey’s connections to Russia – and its membership of the EU customs union – could make it “very tempting” for some European companies to circumvent EU sanctions through legally affiliated subsidiaries in Turkey in the months ahead.

Another challenge for western leaders is the risk that Turkish businesses could rush to fill gaps in the Russian market after western brands – from Ikea to McDonald’s – have pulled out. The crisis represented a big opportunity “not only for the [Turkish] textile industry but also for other sectors, ”said Hikmet Tanriverdi, who represents the textile industry on the board of the Istanbul Chamber of Commerce.

Tanriverdi said that the biggest issue remained payment, given the difficulties for Russian companies in obtaining dollars and euros. He echoed calls from other business figures for local currency trade that would bypass the dollar – and floated the idea of ​​barter trade between the Russian and Turkish central banks that would essentially see Turkey swap exports of products and services for its annual imports of Russian gas.

Such orchestrated efforts to reset trading arrangements would risk drawing “punishment” from the US and Europe, said Dimitar Bechev, a visiting scholar at the think-tank Carnegie Europe.

A chief executive at a large Turkish food producer said that most large businesses would not want to risk falling foul of sanctions. “There will not be a blind jump into the Russian market at the expense of relations with the US or Europe,” the executive said.

Bechev said that the case of Halkbank, a Turkish public lender that New York prosecutors have accused of being part of a multibillion dollar, government-backed scheme to bypass US sanctions on Iran, had scarred western officials. “In the back of their minds [will be the idea that]even if Erdogan eventually signs up to sanctions, he will not be sincere and Turkey will be trying to trade with Russia and find loopholes or backdoors. ”