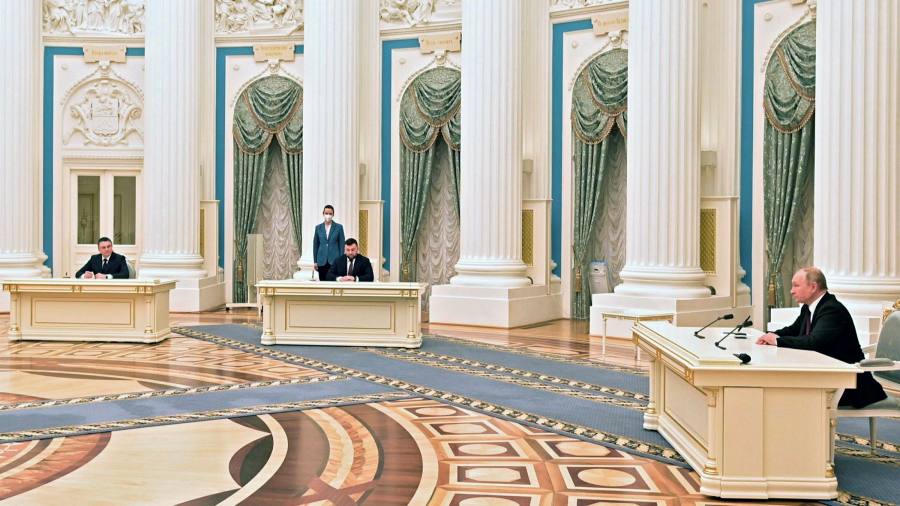 As Vladimir Putin announced his decision to recognize two Moscow-backed separatist states in eastern Ukraine on Monday evening, the Russian president made a clear threat to the west that his options were not at an end.

“When the threat level for our country rises significantly, Russia has every right to take countermeasures to ensure its own security. That’s what we’re going to do, ”Putin said in an angry, rambling, hour-long address.

Sending Russian troops on a “peacekeeping” operation into the Donetsk and Luhansk people’s republics essentially buries the Minsk agreements to try to end the conflict, which has killed more than 14,000 people since 2014.

But Putin, who has massed up to 190,000 troops on Ukraine’s border, has previously hinted he is contemplating “all kinds” of further options – outlined here – that western countries warn could end in a full-scale assault on Kyiv.

During an extraordinary televised session of his security council on Monday, Putin grilled his top officials for their stance on recognizing the separatists.

The prospect, and implied likelihood of war with Ukraine, made even some of his most hawkish advisers visibly uncomfortable. Nikolai Patrushev, security council secretary, suggested that Putin delayed recognition for “two or three days” and used the threat as leverage to force Ukraine to “stop all this bloodshed”.

Though Putin has pressed ahead with recognition, he could be calculating that the specter of future conflict is enough to secure concessions from the US and NATO.

Antony Blinken, US secretary of state, is set to meet his Russian counterpart Sergei Lavrov on Thursday, while the Kremlin said French president Emmanuel Macron and German chancellor Olaf Scholz also expressed an interest in further talks during a call with Putin.

A settlement based on the current state of play would resemble the aftermath of Russia’s 2008 war in Georgia, when it sent troops to protect the separatist enclaves of Abkhazia and South Ossetia. The outcome essentially ended Georgia’s EU and Nato aspirations but prevented – thanks in large part to an intervention by France – a full-on Russian assault on Tbilisi, the capital.

Recognizing the separatists and ripping up the Minsk agreements may satisfy Putin’s goals for now, according to a former Kremlin official.

“It’s better to have a horrific end than an endless horror,” the official said. “A chicken pecks at one grain at a time, not all at once.”

Bring more territory under Russian control in the Donbas

Luhansk and Donetsk, the two Ukrainian provinces of the eastern Donbas region, are only about one-third controlled by the separatists now recognized by Russia. But separatist officials in Luhansk demanded on Tuesday that Ukraine remove its troops from the Kyiv-controlled parts of the province and threatened they would “take measures to restore the territorial integrity of the republic” if ignored.

Vladimir Kolokoltsev, Russia’s interior minister, raised the prospect of recognizing the separatists’ “historical borders” in 2014 which encompassed the entire Donbas before they were “occupied by the Ukrainian armed forces”.

Russia’s decrees and treaties on recognition – parts of which were copied almost word-for-word from Putin’s recognition of Abkhazia and South Ossetia in 2008 – do not define the separatists’ borders.

“There’s no reason for Moscow to just go into the [separatist territories]. It only makes sense if they go further, ”said Tatiana Stanovaya, founder of political consultancy R.Politik. “In Putin’s logic he needs to take a significant part of Ukraine.”

On Tuesday, Russian officials gave conflicting answers about what Putin’s decree meant. Dmitry Peskov, Putin’s spokesman, told reporters Moscow had recognized “the borders in which they exist and in which they declared [independence]”, And declined to go into further detail.

But Andrey Rudenko, deputy foreign minister, told reporters Russia recognized the separatists “within the border they perform their duties and jurisdiction in”.

Nor did Russian MPs seem any the wiser before the vote.

Leonid Kalashnikov, chair of the committee for the former Soviet Union in the Duma, Russia’s lower house of parliament, told reporters that he expected the republics’ statehood to encompass the areas they claimed during their stage-managed 2014 independence referendum.

“Right now, they have less territory than they did during the referendum, but they think their statehood spreads to that territory too,” Kalashnikov said, according to Interfax.

“But the treaty does not account for how those borders will be restored. That’s not our responsibility, ”he added. “In a few days, it’ll all be clarified and decided.”

Though Russia’s forces have been present there throughout the conflict and turned the tide during its active phases in 2014 and 2015, the Kremlin denied it was a party to the conflict despite overwhelming evidence to the contrary. Even as those claims became increasingly less credible, the obfuscation allowed Russia to paint the war as an “inter-Ukrainian event” and mask casualties among its forces.

Recognizing the separatists changes that. The treaties between Moscow and the separatists, signed in a ceremony involving Putin on Monday night, will allow Russia to set up military bases in separatist territory and guard its borders.

An official troop presence raises the prospect for Russia to claim its forces have come under fire from Ukrainian attack. Moscow’s security services and state TV have backed up evidence-free claims by the separatists that Ukraine has intensified artillery fire and “terrorist attacks”.

On Monday, Russia claimed it had exchanged fire with Ukrainian forces for the first time in the eight-year conflict and killed five Ukrainian “saboteurs” spotted on the Russian side of the border.

Alexander Bortnikov, director of the FSB security service, who has served alongside Putin since their days in the Leningrad KGB in the 1970s, claimed they had captured a Ukrainian soldier and that “the essential further work is being performed”.

Claiming its troops have clashed with Ukraine’s armed forces – a prospect the US has warned of as “phoney allegations” – would potentially give Putin a pretext to retake the entire Donbas or launch a larger operation against Ukraine.

“I can not imagine how he’d justify an assault on Kyiv, but I do not see any alternative,” said R.Politik’s Stanovaya. “The goal is to end Ukraine’s existence in its current form. No Ukraine – no problem. ”

Most pointedly, Putin vowed to “punish” those responsible for a 2014 fire in the south-western city of Odesa that killed 46 pro-Russia activists, implying that he could soon have the ability to do so.

As lawmakers prepared to vote in the Duma on Tuesday, they watched a video of a December speech by far-right firebrand Vladimir Zhirinovsky, who predicted Putin’s moves almost to the hour – and hinted how far he could be prepared to go.

“At 4am on 22 February you’ll feel [our new policy], ”Zhirinovsky said. “I’d like 2022 to be peaceful. But I love the truth, for 70 years I’ve told the truth. It will not be peaceful. It will be a year when Russia finally becomes great once again, and everyone has to shut up and respect our country. ”