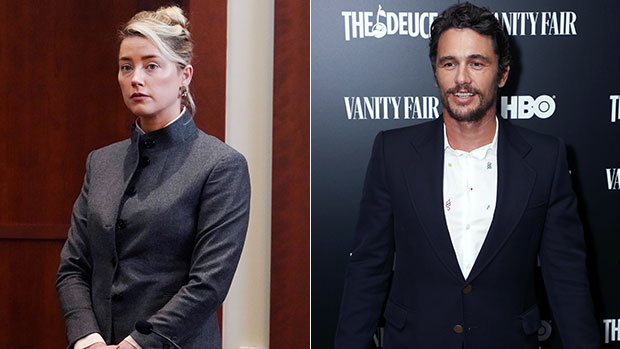 Amber Heard opened up about her friendship with James Franco during the redirect, following the cross-examination from her ex-husband Johnny Depp’s legal team on Tuesday, May 17. Amber, 36, said that James, 44, was simply being a friend when he was seen riding the elevator with her in May 2016, after Johnny’s lawyers questioned her about the CCTV footage of them during the cross -examination.

Amber’s lawyer asked why the 127 Hours actor visited her while Johnny, 58, was away. Amber explained that the two were friends, and he lived nearby. “He was my friend and he lived next door — quite literally next door — and I frankly exhausted my support network with my usual friends and was happy to welcome as much friendship at that time as I could possibly get,” she said.

James Franco: Photos Of The Actor

The cross-examination began on Monday. During the questioning, Johnny’s lawyers asked Amber about specific incidents where she alleged that she’d been hit by the Pirates of the Caribbean star. Johnny’s lawyers showed photos asking her if she saw any physical injuries as a result of the alleged attacks. They also asked if she’d sought medical treatment on various occasions, and she said that she did not.

During Amber’s testimony, the Aquaman actress detailed a number of different alleged instances of abuse and sexual assault, giving her perspective on a number of incidents. Just before the cross-examination began, Amber spoke about meeting SpaceX founder Elon Musk at the 2016 Met Gala, where she said that her ex-husband stood her up. The actress went on to briefly date Amber after she and Johnny split up.

During her testimony, she also spoke about one of the allegations that has gone viral: Johnny’s claims that she defecated in his bed. Johnny’s former executive driver and security guard Starling Jenkins III had testified that Amber had told him that she had pooped in his bed as a prank. Amber denied the claims. “First of all, I do not think that’s funny. I do not know what a grown woman does. I was not also in a pranking mood, ”she said. “I had just been attacked on my 30th birthday by my violent husband with whom I was desperately in love. I knew I needed to leave. It was not really a jovial time. And I do not think that’s funny. Period. It’s disgusting. ”