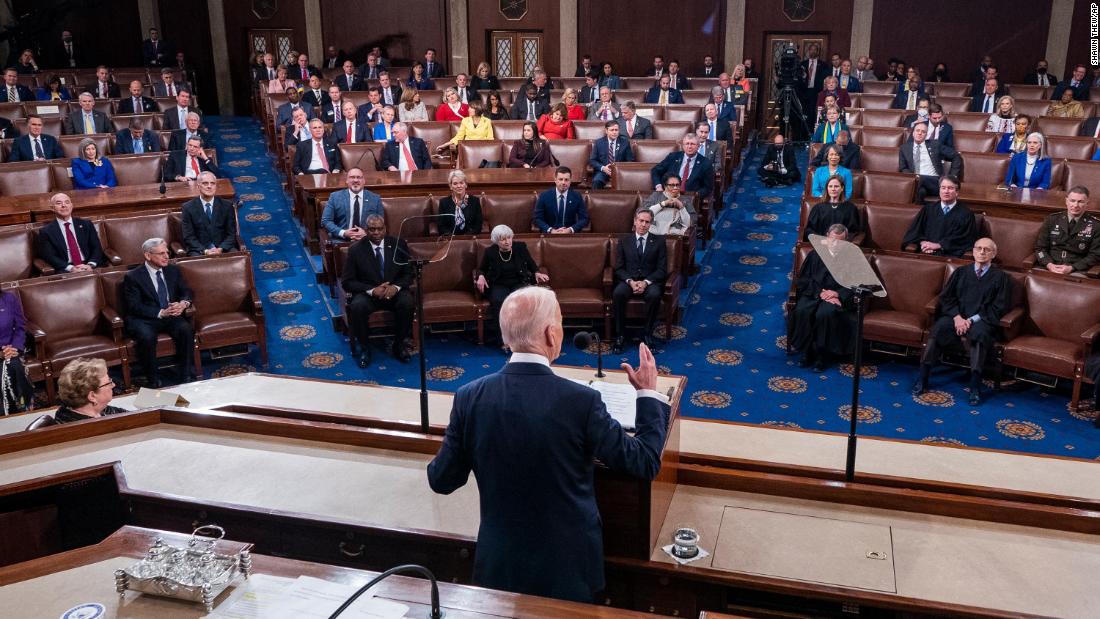 Biden’s address – and an almost unheard of show of unity across Congress’ bitter divides – was also a choreographed statement of resolve to Russian President Vladimir Putin, who has jolted the world with nuclear saber rattling and unleashed the biggest European land war since World War II.

“In the battle between democracy and autocracies, democracies are rising to the moment and the world is clearly choosing the side of peace and security – this is the real test,” Biden said, but warned of a long struggle ahead, adding: ” It’s going to take time. ”

Biden’s framing of the Ukraine conflict as the beginning of an epochal struggle for freedoms threatened by dictators underscored one of the key themes of his presidency. It also almost exactly paralleled the pleas of Zelensky – who has emerged as an iconic global figure as he vows to defend his country.

Earlier, the Ukrainian President told CNN’s Matthew Chance in a rare interview that although the conflict is regional, its implications are universal.

“(Biden) is one of the leaders of the world and it is very important that the people of the United States understand (that) despite the fact that the war is in Ukraine … it is a war for the values ​​of democracy, freedom, “Zelensky said.

It was a call that Biden answered. The President stepped up in the House of Representatives at a time when his presidency is occupied by sinking approval ratings, high inflation, soaring gasoline prices and exhaustion over a pandemic that is now heading into a third year.

He sought to extend a sense of personal command and national unity evident in the standoff with Russia to support his troubled domestic agenda – portraying a nation on the cusp of a job-creating, and prosperous, rejuvenation.

“I know this nation. We’ll meet the test, protect freedom and liberty, expand fairness and opportunity. And we will save democracy,” the President said in the crescendo of his speech.

“Go get ’em!” he roared, an apparently ad-libbed line after he defined the state of the country as “strong.”

Biden’s speech was one of his more confident arguments for his agenda, as he tweaked ex-President Donald Trump’s much mocked “infrastructure weeks” by declaring his new bipartisan law had created an “infrastructure decade,” vowed to fight opioid abuse and to fund the police – not defund them.

But the stony faces of Republican senators as he turned to domestic policy stressed the deep political disconnect in the country that threatens to turn this year’s midterm elections into a disaster for Democrats.

The clear disagreements on issues as diverse as tax policy to gun control and abortion to health care spending only made the unified stance evident on Russia in the House – where many lawmakers wore the blue and yellow colors of Ukraine – even more striking. In a chamber that has recently witnessed vicious distrust between Republicans and Democrats during the pandemic, there really was a sense of the “wall of strength” Biden said Putin was encountering across the globe as lawmakers in rival parties stood to applaud the President.

It was quickly clear after Biden strode into the House of Representatives that Putin had achieved an almost impossible task – unifying most of Washington’s bitterly opposed factions behind a new common enemy and cause.

“Throughout our history, we’ve learned this lesson: When dictators do not pay a price for their aggression, they cause more chaos. They keep moving,” Biden said.

The unity in the House has been paralleled in even more surprising fashion by the common approach of America’s NATO allies, as the democratic world – revolted by Putin’s attempt to crush freedom – rallied around Ukraine with the most punishing sanctions and punishments ever meted out to a major power. Much of the credit for that success remains with Biden, who has spent weeks coaxing allies like Germany into startling shifts in their policy toward Russia.

Biden quickly adopted the role of leader of the free world, a posture familiar to presidents in the decades-long Cold War, which ended in a loss for the Soviet Union that Putin is trying to avenge. He cheered the Russian leader’s failure to divide Americans and the Western allies over the invasion and spelled out point-by-point the throttling sanctions that have sent the Russian banking system and economy reeling. And he warned the oligarchs whose wealth ballooned during Putin’s two decades in power that he was coming for their “ill-gotten gains.”

Biden was speaking to an audience far beyond lawmakers and Americans watching on television.

Although Putin’s spokesman insisted the Russian President would not be watching, the entire section focusing on Ukraine in the speech was meant as a message of relentless US and Western determination toward the Russian leader. And he called on lawmakers to stand and applaud Ukraine’s ambassador to Washington, who was a guest of first lady Jill Biden, to honor the courage of her people.

“Putin was wrong. We are ready. We are united. … We stayed united,” Biden said, warning that the Russian leader was more isolated than ever, and he had badly miscalculated.

To Americans worried about Putin’s nuclear rhetoric and the effect of the war on gas prices, Biden said: “We’re going to be OK” and underscored that he would not send American troops to fight Russians in Ukraine – but left no doubt the US would staunchly defend its NATO allies, including those in Eastern Europe.

But Biden also warned that the struggle to save democracy from autocracy – which also frames the growing US confrontation with China – would be a long one.

“When the history of this era is written, Putin’s war on Ukraine will have left Russia weaker and the rest of the world stronger,” he said.

A struggle for democracy at home as well as abroad

Biden’s address suggested a hinge in history to compare with other great presidential moments before joint sessions of Congress, like President Franklin Roosevelt’s request for a declaration of war against Japan in 1941, or Harry Truman’s coining of a doctrine of US support for free peoples before a joint session of Congress in 1947. Truman’s speech formed the bedrock of Cold War policy in a decades-long ideological struggle against the Soviet Union, a blueprint Biden revived for a new era on Tuesday.

Even more poignantly, Biden spoke from a spot in the House that was defiled a little more than a year ago by Trump’s insurrectionists. Their rampage showed that the fight for democracy is not just some abstract concept at issue in a war thousands of miles away, but is raging at home as well.

The broad support in the House for Biden’s defense of free world values ​​is paralleled in the country. A new CNN / SSRS poll shows that 83% of respondents favor increased sanctions against Russia after the invasion, even if only 42% are at least moderately confident that Biden will make the right decisions in the conflict.

While Biden’s speech was a celebration of the united global front against Putin – one that came across as a rallying cry but could be seen as overly triumphant by Russians faced with spiraling inflation because of global sanctions – it did not point a path out of the conflict. There was no sense that the President was seeking to chart a diplomatic off-ramp for the Russian leader or to suggest that changes of behavior in Moscow could result in an easing of the strangling sanctions.

It was also notable that the President did not directly mention Putin’s decision to order Russia’s nuclear arsenal to higher alert amid concern about this state of mind in Western capitals. Clearly, Biden did not wish to further antagonize the Russian leader.

He moved on after Ukraine to address the high prices and supply chain slowdowns that have dismayed many Americans for weeks – saying at one point, “I get it,” as he referred to the misery of high inflation.

Given national polarization worsened by Trump’s incessant lies that Biden is an illegitimate commander in chief and the stiff headwinds facing Democrats in November, it’s unlikely that this State of the Union speech will revive Biden’s political fortunes. But in decades to come, the address is most likely to be remembered as the moment the West was revived in the face of a new, potentially long-running threat to democracy from tyranny.

“Now is the hour. Our moment of responsibility. Our test of resolve and conscience, of history itself,” Biden said as he drew his address to a close. “It is in this moment that (the) character of this generation is formed, our purpose is found, our future is forged.”

“Well, I know this nation. We will meet this test.”