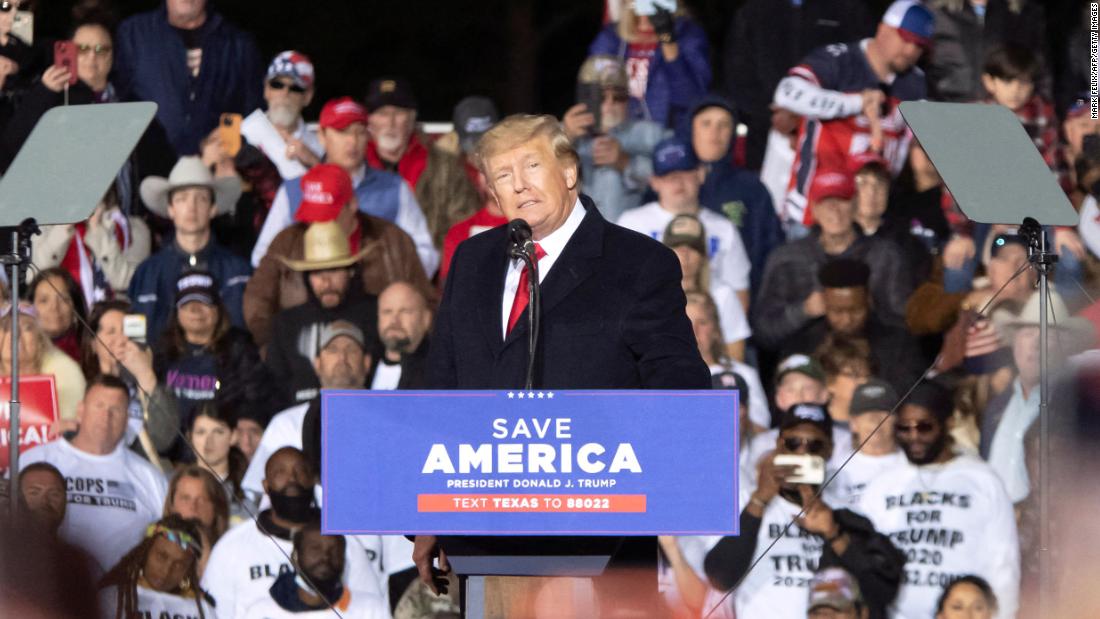 His pledge at a Texas rally Saturday was accompanied by a call for demonstrations if prosecutors in New York, who are probing Trump’s business practices, and those in Georgia, looking into his attempts to reverse his election loss in the state, do anything that he defined as wrong or illegal. The comments underscore Trump’s obsession with delusional lies that he won the 2020 election, and his determination to put that falsehood at the core of the Republican worldview. As was often the case during his four years in office, Trump’s pardons threat shows that he still makes no distinction between his personal goals and the national interest or rule of law.
But the former President’s new rhetorical outburst also at times hinted at concern with his own legal position, and comes at a moment when various criminal and congressional lines of investigation seem to be tightening around him. The House select committee probing the January 6, 2021 riot has now penetrated deep inside Trump’s West Wing inner circle, and he lost a Supreme Court bid to keep key documents secret. The likelihood of a damning accounting from the committee, bristling with new details about Trump’s attempt to destroy American democracy, is growing, though the GOP has sought to thwart it at every turn.
As well as further threatening US democracy on Saturday night, Trump was preoccupied with his personal legal exposure. He fired off a wild attack, which looked to be racially-motivated, on two Black New York prosecutors investigating whether his business empire deliberately falsified accounts to get preferential treatment on loans and income taxes. He also alluded to potential legal peril he’s facing in Fulton County, Georgia, where a Black district attorney has been granted a special grand jury to examine his attempt to steal President Joe Biden’s win in the state.
In a sign of the potential impact of Trump’s incitement, District Attorney Fani Willis wrote to the FBI on Sunday asking for an immediate risk assessment for the Fulton County Courthouse and government buildings. She said that “security concerns were escalated this weekend” by the former President’s speech and added that her office had already received “communications” from people unhappy with the investigation before Trump’s rally.

Trump’s pressure on investigators prompted Rep. Zoe Lofgren, who sits on the House committee probing the insurrection, to warn that the ex-President had issued a “call to arms.”

“Calling out for demonstrations if, you know, anything adverse, legally, happens to him, is pretty extraordinary. And I think it’s important to think through what message is being sent,” the California Democrat told CNN’s Pamela Brown on Sunday.

In yet another sign of Trump’s incessantly consuming inability to accept his election loss, he issued a statement that same evening slamming former Vice President Mike Pence for refusing his demands to overturn the result of the democratic election in 2020, and falsely claimed that the then- vice president had the power to do so.

With Trump and his fans already referring to him as the 45th and 47th President, his fixation with the 2020 election may also represent a growing problem for the Republican Party. In the midterm elections in November and beyond, the GOP wants to build a case that Biden is weak, flailing at home and abroad and has lost his grip on inflation. But Trump, who wants to use the elections to demonstrate his hold on the GOP grassroots, threatens to detract from that simple Republican message. While the ex-President remains wildly popular with the “Make America Great Again” crowd, his loss in 2020 poses the question of whether Republicans – and independents and suburban swing voters – want to get stuck forever in Trump’s unhinged 2020 feedback loop. Some other potential 2024 presidential candidates, like Florida Gov. Ron DeSantis, meanwhile, are demonstrating that Trump’s populist nationalism and assault on what supporters view as liberal elites will be waged long after the 45th President has left the scene.
Democrats failed in their attempt to make Trump the bogeyman in last year’s Virginia gubernatorial election, when Republican Glenn Youngkin kept his distance from the ex-President and tapped into voter concerns about education, Covid exhaustion and rising prices. But it will be an easier case for Democrats to make when Trump is holding wild rallies in swing states and again makes himself the face of the party in 2022, spreading his lies, spewing increasingly racist rhetoric and behaving like an autocrat in waiting.

Trump’s latest comment on pardons was in line with his attempt to whitewash the truth of a day when his mob, incited at his Washington rally, invaded the Capitol to try and disrupt the certification of Biden’s win, beat up police officers and sent lawmakers running for their lives. Throughout his presidency, he used the chief executive’s pardon power to shield his political cronies.

“If I run and if I win, we will treat those people from January 6 fairly. We will treat them fairly,” Trump said on Saturday. “And if it requires pardons, we will pardon them. Because they are being treated so unfairly.”

People dragged into the criminal justice system because they tried to stage a coup based on lies about a stolen election are not being treated unfairly. But it is characteristic of Trump’s democracy-threatening brand of politics to play up a sense of grievance and victimhood. He spent four years of his twice-impeached presidency sowing a narrative that opponents and subordinates who tried to check him were in fact the ones guilty of abusing power. And he repeatedly sought to force the Justice Department to embrace his anti-constitutional schemes.

Several high-profile Republicans quickly dismissed Trump’s offer to help January 6 insurrectionists. New Hampshire Republican Gov. Chris Sununu, who disappointed the national party by passing on a Senate bid, said on Sunday that those responsible for the insurrection must be held accountable. Asked by CNN’s Dana Bash on “State of the Union” about the possibility of a pardon for such Trump supporters, Sununu, who is emerging as a standard bearer for a possible post-Trump GOP, said: “Of course not. Oh my goodness , no. “

One of Trump’s closest enablers, Sen. Lindsey Graham, also dismissed Trump’s promise in an appearance on CBS’s “Face the Nation” on Sunday. “I think it’s inappropriate. I do not want to reinforce that defiling the Capitol was okay. I do not want to do anything that would make this more likely in the future,” the South Carolina Republican said. His comments were notable since he has previously warned that the GOP needs to find a way to work with Trump if it wants to wield power. Another Republican senator, Susan Collins of Maine, also condemned Trump’s remarks. “I do not think … President Trump should have made that pledge to pardon. We should let the judicial process proceed. January 6 was a dark day in our history,” said Collins, who just won reelection in 2020, speaking on ABC’s “This Week.” She also said it was “very unlikely” that she would support Trump if he does officially decide on a third presidential run.

This must have been a case of déjà vu for Republicans who often had their talking points overshadowed by the ex-President’s extremism when he was in power. But it is one thing for key Republicans to criticize the ex-President now. On every previous occasion when the GOP faced a choice between appeasing Trump to keep or win power and standing up for American democracy and the rule of law, it has chosen the first option. In a sense, Trump’s demagoguery this weekend was a fresh sign that he is convinced that his personality cult still holds his party in thrall.

The House Republican conference has already demonstrated that it would act as a vessel of Trump’s power and vengeance if it wins the majority in November. Minority Leader Kevin McCarthy has put the ex-President at the center of his efforts to become speaker of the House and has been put on notice by pro-Trump members like Georgia Rep. Marjorie Taylor Greene that departures from the ex-President’s dogma could doom his hopes. And former Speaker Newt Gingrich encapsulated the extremism of the House GOP when he suggested last week that a new majority should throw members of the January 6 committee in jail.

The ex-President’s speech was also notable for an extraordinary assault on prosecutors in New York who are investigating allegations of fraud at his business empire. The ex-President called for “the biggest protests we have ever had” if the prosecutors “do anything wrong or illegal.” New York Attorney General Letitia James and Manhattan District Attorney Alvin Bragg Jr. are both leading investigations into Trump’s business empire. And both are Black, a point that Trump hinted at in his complaints about his treatment.

“These prosecutors are vicious, horrible people. They’re racists and they’re very sick – they’re mentally ill,” he said. “They’re going after me without any protection of my rights from the Supreme Court or most other courts. In reality, they’re not after me, they’re after you,” he told his crowd.

It was the second recent occasion when Trump has sought to stir up racial hatred as part of his increasingly dangerous rhetoric. He claimed at a rally in Arizona two weeks ago that White people could not get Covid-19 treatment or vaccines in New York, grossly distorting a policy that says race should be one factor in the use of limited therapies for a disease that disproportionately affects Black and Hispanic populations.

Trump’s speech once again presented a conundrum about how much attention should be paid to an ex-President who is using his high profile to stir division and outrage in order to stay politically relevant. Yet given his power in the Republican Party and the intensity of those who follow a once and possible future President who has already incited a coup to overthrow an election, it would be unwise to ignore the implications of his rage.

Even out of office, Trump has convinced millions of Americans that the election was stolen and Biden is an illegitimate president. Multiple Republican-run states have passed laws that make it harder to vote and easier for political officials to interfere in election results rooted in his false claims of voter fraud. And Trump is touring the country inciting polarization and racial animus as the hot favorite for the GOP 2024 nomination.

“This is beyond being a demagogue to the stuff of dictators. He is defying the rule of law. Failure to confront a tyrant only encourages bad behavior,” Dean wrote. “If thinking Americans do not understand what Trump is doing and what the criminal justice system must do we are all in big trouble!”