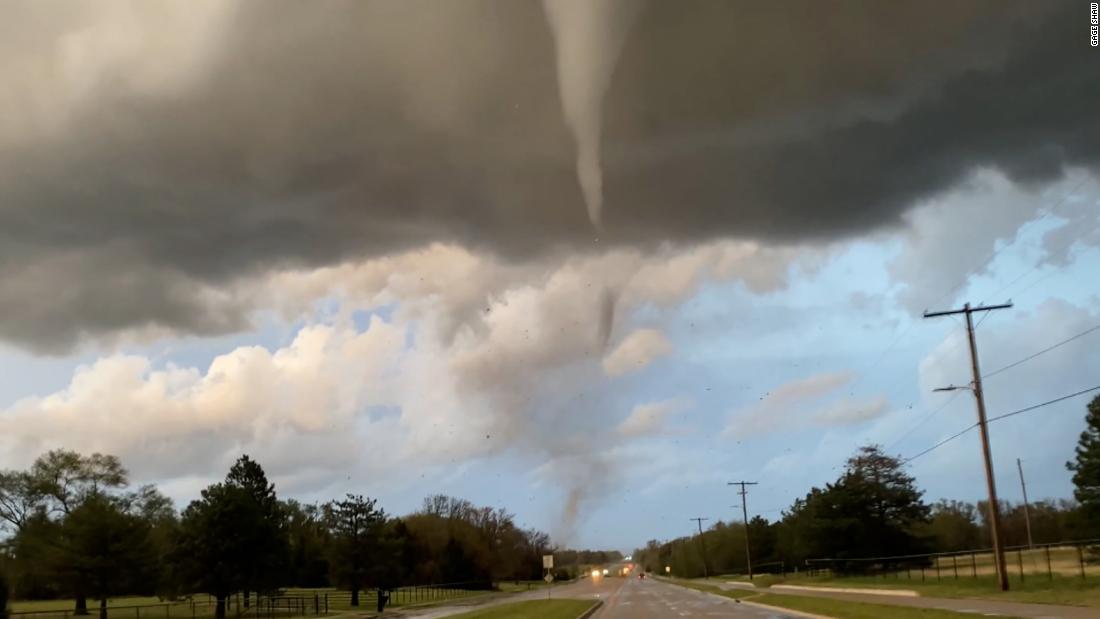 The twister touched down in Sedgewick County, Kansas, before traveling to Andover in Butler County, the city’s fire chief Chad Russell said during a news conference. More than 950 buildings were in the pathway of the tornado, he said.

“We had many buildings in Andover take very tough damage,” Russell said, adding that some homes were “completely blown down.”

The recovery will take years, Russell said. “Unfortunately, we’ve been through this before,” he added, alluding to the devastation caused by an F-5 tornado that struck Andover on April 26, 1991. Seventeen people died in that tornado’s wake.

Resident Alaina Adkins told CNN that she took shelter in her neighbor’s basement across the street from her apartment complex as the tornado swept by.

“I just could not believe. It just did not look real,” the 26-year-old said. “We stepped out of our front door, and it was coming straight to our place,” she said.

The tornado missed her home by a block, but power in her neighborhood was cut off, Adkins added.

More than 20,000 homes and businesses in Kansas were without power in the immediate aftermath. By 4 am ET, that number had declined to around 8,500, according to poweroutage.us.

In an early estimate, Jim Jonas, the Wichita director of communications, said between 50 to 100 structures were damaged by the tornado.

One of those buildings was a YMCA community center in Andover, which suffered significant damage, city administrator Jennifer McCausland said.

14 tornadoes reported in Kansas or Nebraska

The National Weather Service in Wichita said it will send out teams Saturday to conduct damage surveys. “Our thoughts and prayers go out to those impacted by tornadoes this evening,” it said.

Several tornadoes touched down Friday in Kansas, according to Gov. Laura Kelly, who declared a state of disaster emergency.

“We have learned from past experience that we can not wait for the storm to hit before we respond,” Kelly said. “By taking these steps early we are able to more quickly react when the counties ask for assistance.”

A total of 15 tornadoes – 14 of which were across Kansas or Nebraska – were reported Friday, according to the National Oceanic and Atmospheric Administration’s Storm Prediction Center. The other tornado was in Florida, the center said.

Additionally, there have been more than 70 reports of wind damage and over 50 reports of hail.

In Enterprise, Kansas, there was hail up to four inches in diameter.

On Saturday, the storm is expected to move east, where more than 40 million people are under the overall threat of severe storms.

A level 2 out of 5 risk for severe storms has been issued and includes Chicago, Indianapolis, St. Louis and Little Rock.

“Severe thunderstorms associated with a threat of wind damage and large hail are possible on Saturday from the lower Mississippi Valley northward into the western Great Lakes,” the Storm Prediction Center said, “A couple tornadoes may also occur.”