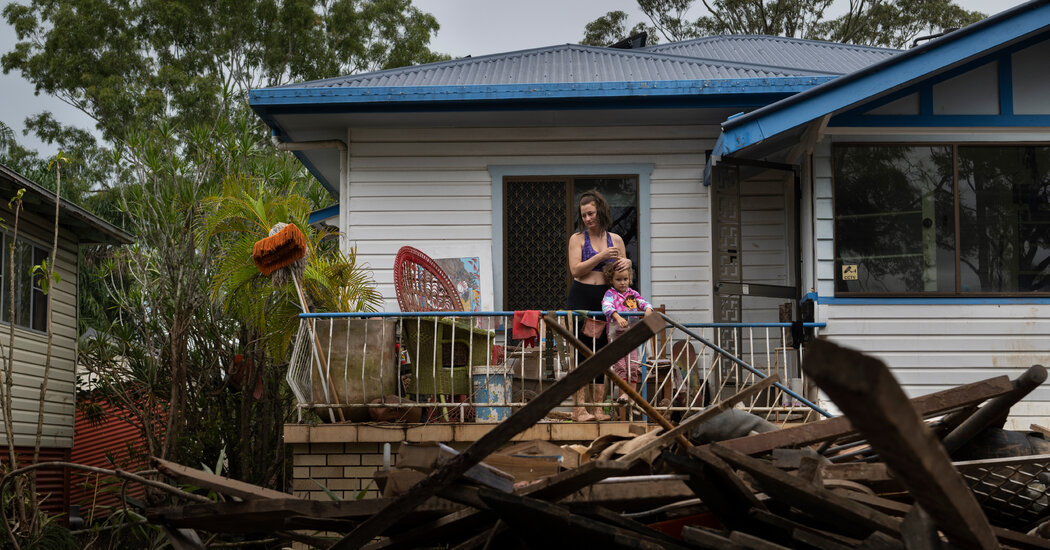 LISMORE, Australia – As the floodwaters rose higher and higher, submerging the stilts that once protected his home, Laurence Axtens grabbed a chair and placed it on top of a table.

Into this last-ditch perch he muscled his 91-year-old mother and then called for help. The police said there was nothing they could do, but that someone from emergency services in their Australian state, New South Wales, would call back.

As climate change increases the frequency and size of natural disasters, governments around the world are struggling to scale up their responses to match. That has been especially apparent in Australia, which experienced catastrophic flooding over the past few weeks along its eastern coast, just two years after the country’s worst bush fire season ever.

The recent torrential rains led to the deaths of 22 people, and rebuilding will cost billions. The flooding was particularly severe in the city of Lismore, about eight hours north of Sydney, where thousands of residents like Mr. Axtens remained in their homes, assuming that the flood would be like others they had experienced before.

Many homes in the city of 28,000 people stand on stilts that stretch well above the level of any previous flood in an area prone to them. But in the early hours of Feb. 28, floodwaters peaked at more than six feet higher than the worst flood the city had ever recorded, quickly inundating supposedly safe homes.

Emergency hotlines were overwhelmed, and emergency services struggled to cope with the scale of the disaster. Some residents posted pleas for rescue on Facebook, while others were left to yell for help from atop their homes.

The roof was not an option for Mr. Axtens. His frail mother never would have made it. But he was fortunate to reach a friend who pulled up outside his window at dawn in a private boat – part of a large civilian effort, operating in defiance of official orders to stay out of the water, that was widely credited with saving many lives.

“I’m incredibly grateful that I did not have to watch my mother die in front of me,” Mr. Axtens said one recent day, sitting in the gutted remains of his home.

“The community came to our rescue,” he added, “and we lived.”

Australians are a roll-up-your-sleeves kind of people, not unaccustomed to dealing with trouble and tragedy on a continent of environmental extremes. But they also expect their government – which they pay much in taxes to finance – to be prepared and competent.

For many Australians, their faith in the authorities’ ability to support them in times of disaster was shaken by the bush fires of 2019-20, when the prime minister, Scott Morrison, was seen as slow to act. Mr. Morrison significantly increased federal resources to fight the blazes only after millions of acres had burned and dozens of lives had been lost.

A year later, in March 2021, disastrous flooding struck New South Wales and Queensland – the same region that has been devastated by flooding this year.

As he visited Lismore earlier this month, Mr. Morrison – who is facing an election by May – acknowledged that “Australia is getting harder to live in.” He spoke as protesters there decried inaction by his conservative government on both the flooding and on climate change more generally.

“We are not keeping up with these disasters,” said Roslyn Prinsley, head of disaster solutions at the Australian National University’s Institute for Climate, Energy and Disaster Solutions. “We can not just keep doing the same things we’ve done before.”

Lismore and other flood-affected towns are asking why so much of the responsibility for rescue and recovery has fallen to civilians.

In some towns where torrential rain triggered landslides, residents say they dug out neighbors who were trapped for 30 hours using only their bare hands. The federal defense minister started a GoFundMe page for his local flood-affected electorate, leading many to question why that financial assistance was not being provided by his government.

In Lismore, the state emergency services had only seven rescue boats available, according to the mayor, Steve Krieg.

“Seven boats were simply not going to save 4,000 people,” he said, offering his estimate of how many people had been rescued by civilians and emergency services. “How we respond has obviously got to get better.”

The New South Wales state emergency services chief, Carlene York, has blamed inaccurate weather forecasting. She apologized to residents who were stuck on roofs for hours but said, “We put as many resources there based on the forecast, based on history.”

Mr. Morrison, for his part, has defended the federal government’s response, including a gap of nine days before he declared a national emergency, a power introduced after the bush-fire crisis to reduce red tape.

It was unrealistic, he said, to expect the military to be “just waiting around the corner.”

“Those who are first here are always going to be the local community, neighbors helping neighbors,” he said. “State, local and federal governments aren’t there to replace that, but to aid it, to support it and continue to build on it.”

To some extent, flood-prone communities agree with this sentiment.

“If we can do our bit and look after 100 people, it means that the emergency services can go and look after someone else,” said Darren Osmotherly, who lives in Lower Portland, which has suffered severe flooding the past two years. Local residents will always be able to respond faster in disasters than official agencies, he added.

Mr. Osmotherly was still damp from having swum into his flooded restaurant and dived underwater to close an open door and make sure his furniture did not float out.

He, like many others, wanted to stay and salvage whatever he could, even a window screen that two friends pried away as they sat at the edge of a boat.

Mr. Osmotherly and his friends spent the rest of the day checking in on stranded neighbors in Lower Portland, about an hour and a half from Sydney, an occasionally dangerous task that required maneuvering their boat around swamped power lines and over fences.

As much as the community was capable of looking after itself, they wished that the government would stop approving new developments in the area, make flood insurance more affordable and better manage the nearby dam.

“We’ve had no help at all,” said Nick Paton, a journalist with a local Indigenous-run newspaper, Koori Mail. After the flood, the paper’s staff used donated money to charter private boats and helicopters to deliver supplies to remote Indigenous communities, said Mr. Paton, who is from the Ngunawal tribe.

The community response is in full swing. Remain in one place for an hour, and someone will drive past with something to give: coffee and sandwiches out of a car trunk, ice cream or beer from a cooler, or an offer to hose out a house.

Military assistance is now visible, with camouflage-patterned vehicles driving in and out of town. At a school one recent day, a dozen troops hauled sodden furniture outside.

Even as the recovery just gets underway, the conversation is turning to the future.

Aidan Ricketts, who rescued Mr. Axtens and more than a dozen others with his boat on Feb. 28, wants the government to invest in better weather modeling and do more about climate change. He is also thinking about granular changes like moving signs and posts or tying buoys to them so that boats do not strike them when the town is submerged.

Officials must acknowledge, he said, that “sometimes this town is a river.”

Elly Bird, a local council member and a coordinator of Resilient Lismore, another volunteer-run flood response organization, said she was worried that yet another so-called one-in-500-year flood would “happen again soon.”

The disaster in Lismore, she said, shows that the authorities “can not do it alone.” Communities need the resources and funding to do the rescue and recovery work, she said.

“With the scale of events that we are seeing now, with climate change, as they get bigger and more frequent and more often and cover larger areas, the agencies are stretched to respond,” she said. “They do not have the resources to respond quickly. And so the community needs to be able to work alongside them. ”