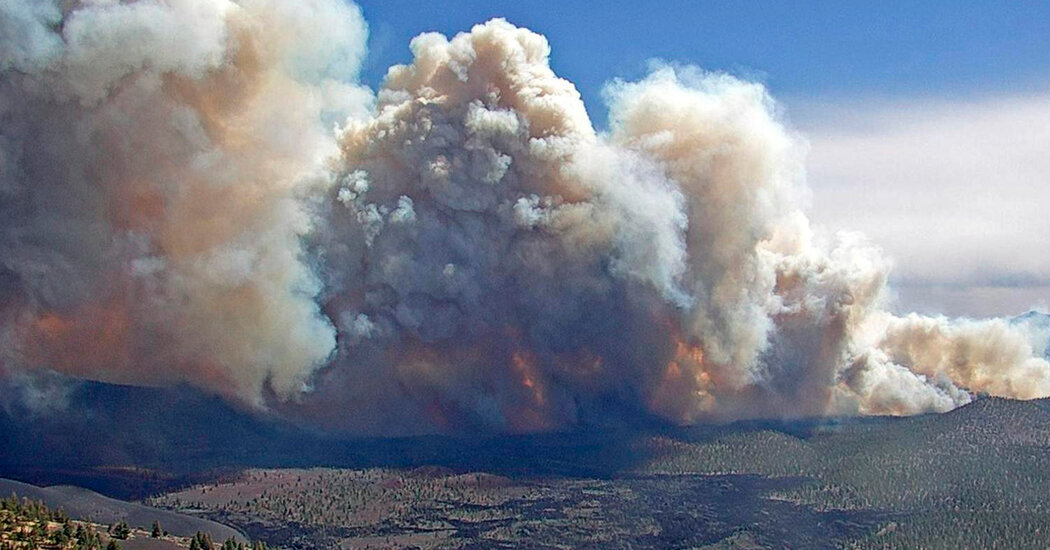 FLAGSTAFF, Ariz. – In a gas station parking lot crowded with firefighters and anxious evacuees on Wednesday, a woman sat in her car and cried while watching wildfire smoke spew across her neighborhood.

“I’m not ready for this,” she said as she and her neighbors waited for word of their homes near Flagstaff, Ariz. “Not this early.”

Wind-driven springtime wildfires are tearing through parched evergreens and brush across Arizona, New Mexico and Colorado, burning scores of homes and forcing thousands of people to flee during a fire season that is growing longer and more destructive as climate change dries out the West.

In northern Arizona, the fast-moving Tunnel fire was burning through an expanse of forest and rural homes about 14 miles northeast of the college town of Flagstaff. The fire, whose cause is under investigation, swelled to more than 19,700 acres by Wednesday and had destroyed 25 buildings, according to a spokesman for the Coconino County Sheriff’s Office.

The fire was zero percent contained on Wednesday evening, and there were no reports of deaths or injuries.

The Tunnel fire is one of several blazes that have erupted across the West in recent weeks, fueled by chaotic winds, a deepening yearslong drought and an acute scarcity of spring rain or snow.

“We used to have the fire season,” said Don Falk, a professor of natural resources at the University of Arizona, who is in Tucson. “That’s an obsolete concept. Fire season is 12 months. ”

In New Mexico, a recent wildfire killed two people and burned 200 buildings around Ruidoso. A wind-driven blaze burning uncontained in the national forest outside of Prescott, Ariz., Swelled to 1,600 acres by Wednesday. And in Colorado, fire crews in Boulder, where a winter grass fire destroyed more than 1,000 homes, spent the past week racing to tamp down several smaller fires.

A fire in the San Luis Valley of southern Colorado destroyed or damaged as many as 16 buildings on Wednesday as it tore through the small town of Monte Vista, according to The Alamosa News.

In all, more than 2,300 firefighters across the West are currently fighting fires and about 830,000 acres have already been charred this year, according to the National Interagency Fire Center. In Arizona alone, more than 500 firefighters are battling the two largest blazes.

“Everybody is out on these fires,” said Tiffany Davila, a spokeswoman for the Arizona Department of Forestry and Fire Management.

The winds hampered efforts to contain the Tunnel fire by grounding firefighting flights on Tuesday. Fire officials said the winds across northern Arizona were expected to gust to 50 miles an hour on Thursday and Friday.

Forecasters also warned that high winds and dry conditions would make the next few days perilous across the Southwest. The National Weather Service in Boulder issued a warning about extreme fire danger stretching from southern Arizona and New Mexico up the flank of the plains of eastern Colorado.

Officials said that the Tunnel fire did not pose an immediate threat to Flagstaff, home to Northern Arizona University and about 77,000 residents, and that they were hopeful the winds would continue pushing it toward thinly populated areas. The fire forced the closure of the Sunset Crater Volcano and Wupatki National Monuments, scattering park workers who said they did not know how long they would be displaced.

Residents said they had barely paid heed to the small fire when it was first reported on Sunday and they saw smoke rising against the backdrop of the San Francisco Peaks. But by midday Tuesday, they were scrambling to escape a curtain of flames and smoke after the wind kicked up and brought the fire tearing through their horse corrals and two-acre yards.

“It was like driving to Mordor,” said Amber Randall, who raced home from a work appointment in Sedona, about an hour away, while her assistant rescued dogs and cats and an expensive drawing owned by David Bowie from her home. “There was no time. No time. ”

By Wednesday afternoon, the winds were gathering new strength as Carla Chiquito, 51, and her family sat in the parking lot of a gas station just outside the boundaries of the mandatory evacuation zone. Her husband had stayed behind, dousing the yard with a hose after a neighbor’s house burned to the ground.

Lisa Bishop pulled up with a livestock trailer, hoping to return some of her animals to her home after the flames tore through her neighborhood in the Timberline-Fernwood community, which had sustained the worst damage.

She said she had not worried much about the threat of fire. The area around her burned in a huge blaze a dozen years ago, but she felt protected by a highway that stood between her home and the forest.

But on Tuesday afternoon, the fire leaped across that road and charged into her neighborhood. Ms. Bishop and other neighbors raced to get their livestock and pets into trailers and carriers before fleeing.

“It looked like hell,” she said. “It was the scariest thing we’ve ever seen.”