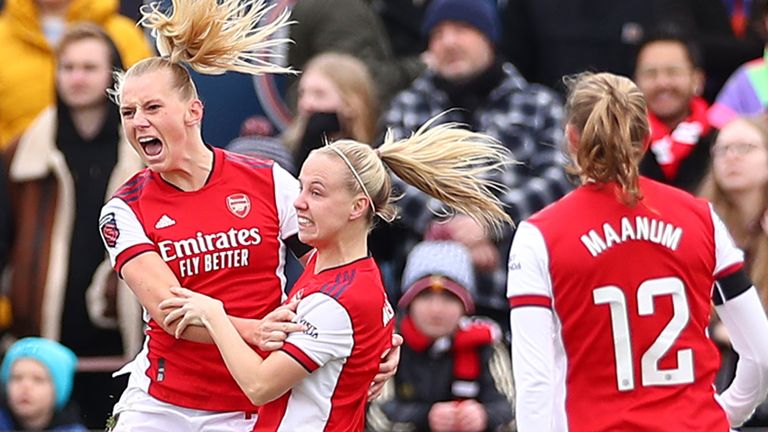 Stina Blackstenius’ strike sealed Arsenal a draw against Man Utd despite the WSL leaders having to play the last 15 minutes with 10 players after Katie McCabe’s red.

The visitors lead early through Alessia Russo’s bouncing header and had further chances to extend their advantage, before McCabe saw red for two bookable offenses.

However, Marc Skinner’s side were made to pay for those missed opportunities when Vivianne Miedema’s brilliant through ball opened up the visitors’ defense, with Blackstenius keeping her cool to earn the hosts a valuable draw.

Jonas Eidevall’s team arrived at Meadow Park having lost just once in the league all season long – a shock defeat at Birmingham – but soon found themselves trailing as Russo’s far-post header from a disputed corner somehow made its way past Arsenal goalkeeper Manuela Zinsberger 10 minutes in for her seventh goal of the season, including five in the WSL.

Miedema came close to leveling minutes later, only for Mary Earps to somehow touch her fearsome strike onto the bar as United lead at the break, with their goal scorer Russo then on hand to clear Jennifer Beattie’s close-range shot off the line at the start of the second half.

However, despite McCabe picking up two needless cautions in less 20 second-half minutes, Arsenal actually finished the stronger of the two sides and drew level after brilliant play by Miedema.

The Sweden international picked up possession deep inside her own half, before splitting open United’s defense with an inch-perfect through ball, with Blackstenius – on a second-half substitute – faced with just the advancing Earps to beat, finishing expertly.

Jen Beattie, Tobin Heath and Stina Blackstenius were all available for Arsenal after returning from illness, although the latter only started on the bench. Following Australia’s Asian Cup elimination, Lydia Williams, Steph Catley and Caitlin Foord were also available, but only Catley made the starting XI, while Mana Iwabychi remained away with Japan.

Meanwhile, for the visitors, Ella Toone and Hayley Ladd both returned after missing the League Cup semi-final through suspension.

As a result, Arsenal have now moved five points clear of Chelsea in second, although the champions do now have two games in hand on their London rivals. 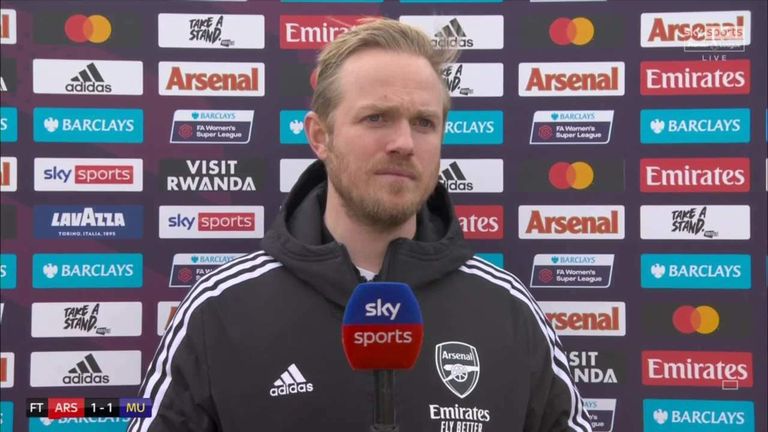 Arsenal head coach Jonas Eidevall gives his reaction after seeing his side draw with Manchester United. 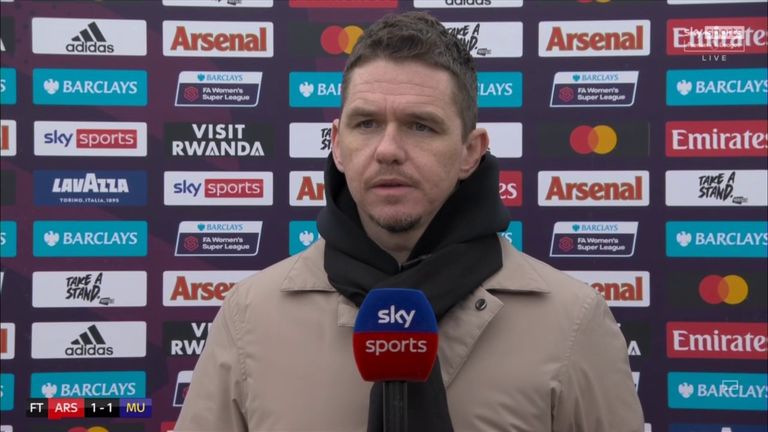 Manchester United’s Marc Skinner said he has ‘nothing but admiration’ for his team after signing with Arsenal.

Arsenal travel to Chelsea on Friday night (7.45pm) in a game you can see live on Sky Sports Premier League, while United visit arch-rivals Man City a week on Sunday (12.30pm)