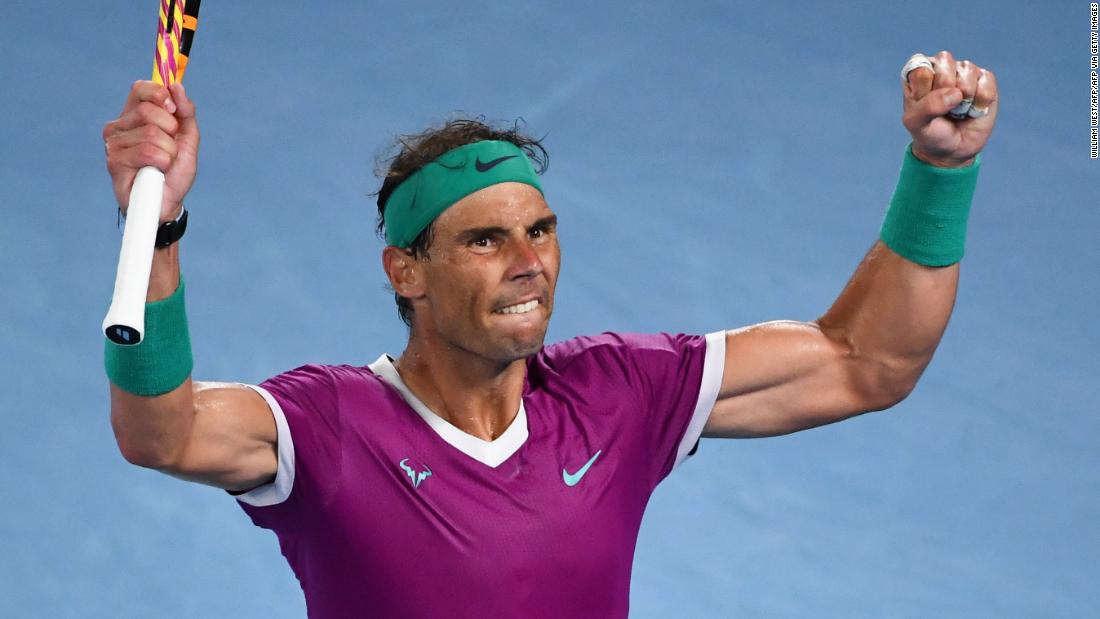 The Spaniard surpassed the previous men’s record of 20 he held jointly with Roger Federer and Novak Djokovic, the latter of whom was denied entry into the country after having his visa revoked.

There had been major doubts about whether or not Nadal would even be fit enough to play at the Australian Open after missing the second half of 2021 with a foot injury.

However, he returned to action at the Melbourne Summer Set tournament at the beginning of January, going on to win his first ATP title since May 2021.

After beating Matteo Berrettini in the Australian Open semifinal, Nadal said he was just happy to be back on the court after being possessed by injuries.

“I feel lucky just playing tennis,” he told Eurosport. “I’m playing with a great tactical, positive feelings. I feel a little bit alive again, attitude, the competitive spirit, so yeah, I’ve missed that feeling sometimes. I am enjoying it.

“I know the pressure is not much for me now. I never believed I would have the chance to be where I am today, so I’m just enjoying every single moment.”

As he sank to the floor, exhausted but victorious after five-and-a-half enthralling hours, Nadal proved he was not only fit enough to still compete at grand slams, but could realistically still win several more.

The crowd was audibly in favor of Nadal when the two players walked out onto the court, with a smattering of boos echoing around Rod Laver arena when Medvedev was introduced.

In Nadal’s second service game, the pair exchanged a grueling 26-shot rally which ended with Medvedev’s pinpoint backhand down the line to open up a 0-30 advantage.

The Spaniard then shut the door with two quite remarkable points; the first a ridiculous passing shot after Medvedev had crushed a short forehand straight at him, the second a volley winner after being forced to go full stretch to reach a huge forehand.

Nadal did eventually hold serve to take an early 2-1 lead, but he was being made to work brutally hard for every single point and was already being forced to produce some of his best tennis.

As Medvedev cruised through his own service games by comparison, heaping the pressure immediately back onto Nadal, you had to wonder whether this level of tennis was sustainable for five sets for the 35-year-old.

The pair had barely been playing for 20 minutes and already Nadal was drenched with sweat, his shirt clinging to his torso and beads falling from head. At the other end of the court, Medvedev looked like he’d barely broken a sweat.

Indeed, Nadal’s serve was broken to love in his very next service game as Medvedev took a 3-2 lead. Things were looking ominous.

Two more easy holds followed, as did another easy break of Nadal’s serve, as Medvedev closed out the first set without dropping another game.

Nadal desperately needed to try something different in the second set; Medvedev was hitting the ball harder and more cleanly and felt like the favorite to win each point at the start of every rally.

The Spaniard opened the second set with a relatively comfortable hold of serve – perhaps his only one of the match so far – celebrating with a shout of “si” and a fist pump towards his box as he attempted to fire himself up.

It clearly worked as Nadal earned his first break of the match in Medevedev’s next service game – and he was really made to earn it.

Nadal ended a mammoth 40-shot rally with a quite ridiculous sliced ​​backhand that Medvedev could not get anywhere near to open up a 15-40 lead, eventually breaking serve with his second break point to go 3-1 up.

However, after an easy hold of serve, Medvedev held his own serve before breaking Nadal back – much to the despair of the boisterous crowd on Rod Laver.

This match, though, was becoming unpredictable and Nadal broke Medvedev’s serve once again to take a 5-3 lead and give himself the chance to serve for the second set.

To make matters more complicated, an incident in the stands forced a number of security guards to come onto the court and stand around the two players as a man apparently attempted to jump onto the court.

In keeping with the rest of the match, it was a brutal game that lasted more than 12 minutes and it was Medvedev that came out on top, finally breaking back with his fifth break point to make it 4-5 and deny Nadal the set.

The pair exchanged holds of serve until the set reached a tie break. Nadal had done well to make this match a contest, but winning this set was felt crucial to ensuring the final would go the distance.

The Spaniard has produced some Herculean efforts throughout his career, but coming from two sets down here was surely beyond him. Wasn’t it?

As the clock ticked over the two hour mark, both players continued to produce outstanding tennis but it was once again Medvedev who got the better of Nadal.

One crucial point in the tie breaker – with Nadal leading 5-4 – went to the Russian as Nadal’s volley dropped just wide. The hawkeye system confirmed the line judge’s call, but the decision was still roundly booed by the crowd.

After Medvedev hit the backhand winner that earned him the tie break and deflated the crowd, he turned to look at the stands and raised his arms above his head as a mixture of cheers and jeers rained down.

Down, but never out

Despite the bitter disappointment, Nadal began the second set strongly and had a wonderful chance to give himself two early break points, but a less than perfect approach shot allowed Medvedev to hit a huge backhand winner that flashed past his opponent at the net.

Nadal glanced up at his box with a worried look on his face, knowing how costly these squandered opportunities would be.

But the Mallorcan has forged a reputation as one of the biggest warriors on the court and, even now in twilight of his career, there are signs of that fight fading.

Nadal clawed his way back to deuce, before eventually winning the game to level the third set.

The momentum of this final swung dramatically with Medvedev serving at 4-4, as nerves seemed to be getting the better of the Russian as he approached the finish line.

One bizarre attempt at a drop shot resulted in the ball hitting the net and Medvedev sarcastically applauded the crowd, who he felt had made noise before he hit the shot, leading to a loud chorus of boos.

Nadal broke his opponent with an incredible backhand passing shot down the line and the Rod Laver arena erupted – it was by some distance the loudest sound of the night.

Unlike in the second set, Nadal held serve with ease thanks to four straight winners to make it 2-1 and Medvedev appeared to be rattled.

During the changeover, he told the umpire that some fans were “idiots with empty brains” after one supporter had shouted just before Nadal was going to serve.

The comeback is on

The momentum continued to swing further in Nadal’s favor at the start of the fourth set, as the Spaniard somehow managed to save two break points to make it 1-1.

Medvedev had certainly allowed to let the fans get inside his head, as a double fault to hand Nadal a break of serve ended with him sarcastically applauding and putting his thumb up to the crowd.

The Russian calmed himself down during the change of ends and responded with an immediate break back, leading the area to burst into a chorus of “let’s go, Rafa, let’s go.”

However, he just could not stop a resurgent Nadal.

Medvedev managed to take his next service game to deuce after being 0-40 down, but Nadal was relentless in his pursuit of another break of serve and eventually got it at the seventh time of asking to end another marathon game.

Nadal was now playing some of the best tennis of his life – and it had to be that good to beat his opponent – holding his next service game to take a 4-2 lead in the fourth.

Medvedev had also called the trainer to massage his right thigh and at times he appeared to move with a little difficulty when moving that leg.

Nadal’s next service game was the biggest of the set, as he rattled off four straight points from 15-40 down to make it 5-3.

Medvedev managed to hold the next game, fending off a set point, but it was just delaying the inevitable as Nadal closed it out with a faultless service game. This match was quickly turning into one of the all-time great grand slam finals.

Medvedev had to dig deep again at the beginning of the fifth set, saving another early break point. It was the 12th break point he’d saved in the match, a new record for the Russian.

There was seemingly now no stopping Nadal, as he broke his opponent’s serve once again to take a 3-2 lead – perhaps for the first time he would allow himself to start thinking about number 21.

Nadal ensured, for the time being, that Medvedev did not get back into the set, saving multiple break points in a game that went on to deuce six times to make it 4-2.

The match clock now showed these two show stoppers had been battling it out for five hours, yet neither player looked like dropping their level any time soon.

Nadal was soon serving at 5-4 to win the championship and had a 30-0 lead, seemingly on the cusp of creating history. However, Medvedev dug deeper still to win four straight points and break back at the most vital of moments.

However, Nadal was just not going to be denied his record title. He broke back immediately, perhaps playing his best tennis of the final, and then had his second chance at serving for the championship.

It was a chance he would not squander again, holding his nerve expertly to etch his name into the history books.

Given where he was just sixth months ago, at times pondering retirement, Nadal’s victory here in Melbourne will go down as one of tennis’ greatest wins.