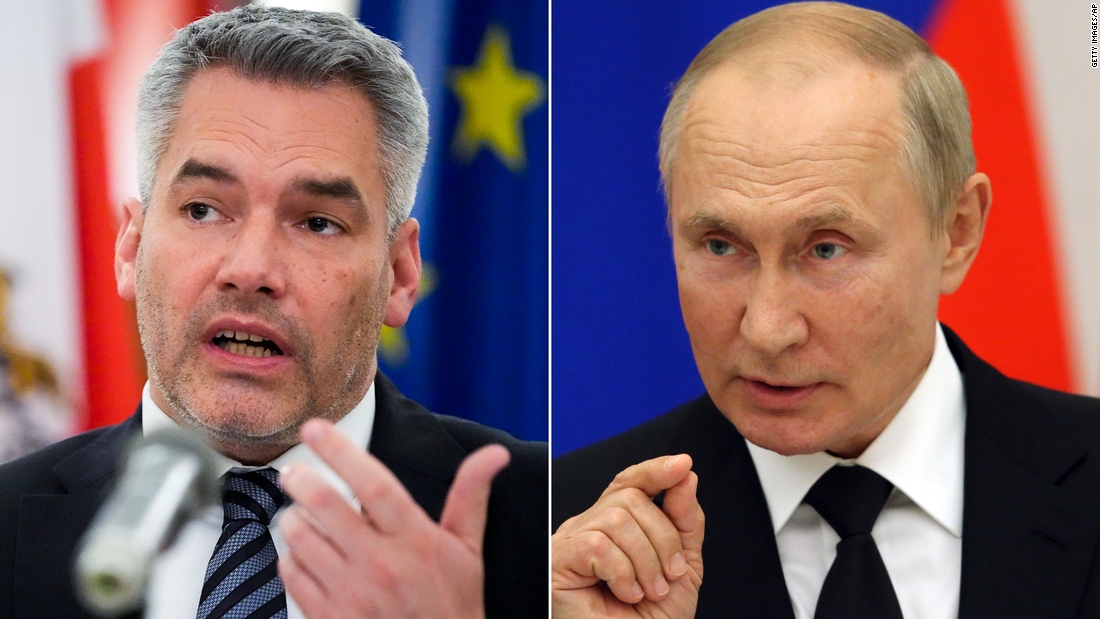 “This is not a friendly visit. I have just come from Ukraine and have seen with my own eyes the immeasurable suffering caused by the Russian war of aggression,” Nehammer was quoted as saying in a statement issued by his office after the meeting outside Moscow .

“I made the decision to go to Moscow, to look into President Putin’s eyes and confront him with what I saw,” the Chancellor said in an interview with CNN’s Becky Anderson Wednesday.

When asked about Putin’s mindset during the meeting, Nehammer said Putin was very tough and clear in his messages.

“In his point of view he has to defend the Russian Federation, the Russians living in eastern Ukraine,” he said.

Putin has long accused Ukraine of violating the rights of ethnic Russians and Russian speakers in the country, and framed his invasion as a “special mission” to protect Russian speakers – particularly in the eastern Donbas region – from genocide at the hands of “neo-Nazis.” Until the February invasion, Donbas had been the site of a low-intensity war between Russian-backed separatists and Ukrainian forces in which thousands have died since 2014. His claims of genocide and state neo-Nazism are both baseless.

Nehammer said Putin mentioned the Istanbul peace talks, and the Austrian chancellor emphasized he sees an opportunity in those talks to end the war.

The Chancellor said he confronted Putin about war crime and told him “it is necessary to have international justice, the United Nations there.”

Nehammer said, “it’s not easy for Putin to talk about war crimes.”

Asked whether Putin accepted there were war crimes bring committed, Nehammer responded, “Well, you know, It’s President Putin. In this position, he was not clear.”

Nehammer is the first European leader to meet Putin face-to-face since his invasion. His visit divided opinion among EU leaders, with some expressing skepticism about engaging with the Russian leader.

The pair spoke for about 75 minutes at Putin’s Novo-Ogaryovo residence near Moscow, Nehammer’s spokesperson said on Monday, in talks the Austrian leader described as “very direct, open and tough.”

Before visiting Russia, Nehammer met with Ukrainian President Volodymyr Zelensky in Kyiv on Saturday and visited the town of Bucha, where bodies of unarmed civilians were found strewn across public streets after a month of Russian occupation.

” I addressed the serious war crimes in Bucha and other places and emphasized that all those responsible for them must be held accountable, “Nehammer said, according to the statement issued by his office.” I also told President Putin in no uncertain terms that “Sanctions against Russia will remain in place and will continue to be tightened as long as people are dying in Ukraine.”

The Austrian leader said Putin had blamed the Ukrainians for “being responsible for the crimes in Bucha.” Video footage, however, shows Russian forces gunning down a civilian there.

Austria is militarily neutral but its government has joined its neighbors in condemning Putin’s invasion.

The Chancellor said he raised the issue of evacuation corridors with Putin, after repeated instances in which attempted evacuations around Ukraine have been scuppered by Russian attacks. Ukrainian officials said a Russian strike on Kramatorsk train station on Friday killed dozens of people, including several children.

“I also made it clear to the Russian President that there is an urgent need for humanitarian corridors to bring drinking water and food to the besieged cities and to bring out women, children and the wounded,” Nehammer said in his statement.

Nehammer cited “a sense of responsibility to leave no stone unturned” as a reason for seeking the meeting with Putin, saying: “For me, there is no alternative to seeking direct talks with Russia as well, despite all the very great differences.”

According to the United Nations, at least 1,892 civilians have been killed and 2,558 injured since the war in Ukraine started in February.