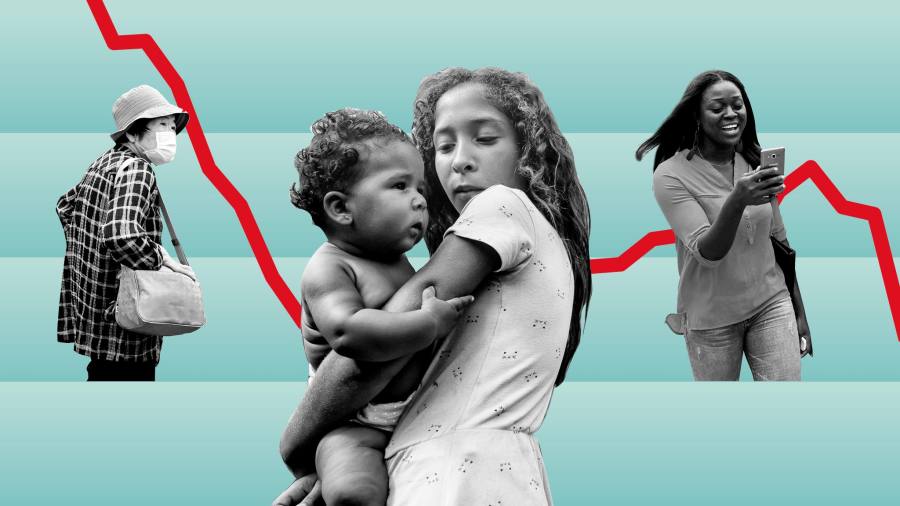 The 19th century French philosopher Auguste Comte got it wrong: demography is not destiny.

Population trends are some of the strongest forces in economics, affecting global prosperity, the growth of individual nations and the strength of public finances. But reducing the success of countries and regions to their trends in births, deaths and migration is a simplification too far.

As the coronavirus pandemic has shown, the confident predictions in 2020 of a lockdown baby boom followed by the 2021 fear of a Covid baby bust demonstrate that demographic trends are far less stable than often imagined. Small changes in fertility, mortality and migration can have immense effects.

As recently as 2014, the official UK government projection was for the country’s population to rise to 85mn by 2080 up from 67mn in 2020, but the most recent iteration with higher death rates and lower birth rates has brought that figure down to only 72mn people.

The economics of demography is also easy to diagnose wrongly, especially with often-used comparisons that are typically both simple and misleading. The US economy is frequently said to be more dynamic because the nation is more youthful than Japan. In the 19 years between 2000 and 2019, the US economy grew 46 per cent compared to only 26 per cent in Japan. But the latter achieved its growth rate with a falling working age population and its per capita growth rate for everyone aged between 16 and 64 was 5 per cent higher than that in the US over the same period.

Demographic trends and their relation to economic dynamism are clearly more complicated than some simple statistics suggest. Overall growth rates of middle-income and rich countries are strongly linked to population growth, but living standards are not.

Over the next 20 years, some trends are clear. Declines in fertility rates leading to a shrinking natural population in the US, less than one baby born per woman in South Korea and deep concerns about fertility across Europe will make sustained rapid economic growth ever harder to achieve. They will increase the burden of high levels of public and private sector debt for potentially shrinking populations and put pressure on governments to raise taxes to pay for the greater income, health and care needs of the elderly.

Global birth rates are falling and the world’s population will begin to contract in the coming decades. The FT examines why – and whether policymakers can do anything about it.

Day 1: How the pandemic affected the baby bust

Day 2: China is at the center of global population crunch

Day 3: Can policymakers do anything about it?

Day 4: Learning to live with the economic consequences

After 30 years of decline amid China’s achievement of middle-income status, global inequality is also likely to rise again. This will be driven by the fact that the only area with a rapidly growing population is sub-Saharan Africa, the world’s poorest region. UN projections show that roughly one in seven people lived south of the Sahara desert in 2019, a figure projected to rise to one in six by 2030, and to one in three by the end of the century.

If the public finance difficulties of richer countries, amid slower growth and greater global inequality, are relatively likely consequences of current global demographic trends, the effect of aging on global inflation is much disputed.

In their book, The Great Demographic Reversal, authors Charles Goodhart and Manoj Pradhan predict a sustained rise in inflation as large numbers of advanced economy residents retire and the era of cheap labor in China comes to an end. Japan’s experience of aging alongside persistent mild deflation suggests the outcomes will be less certain, especially as aging societies are not known for rampant consumerism.

The world can therefore expect slower growth alongside falling fertility rates in middle and advanced economies, similar income levels per family and uncertain effects on inflation. The gaps between standards of living in rich and poor countries and the growing African population of young people will increase the incentives for migration as inequalities become ever stronger.

This will generate difficult choices across the world. Richer countries that welcome and successfully integrate migrants will be able to smooth many of the financial pressures of aging. Others will try to offer financial incentives to increase birth rates, even though they have scant evidence of their effectiveness. Cultural change to make lives easier for parents, especially mothers, will also be needed. Where longevity is rising, later retirement will also become important.

Demography is not an economic destiny. It is too fickle a variable for that to be true. But neither can it be ignored. As the Swedish economist Knut Wicksell proposed more than a century ago, economics needs to start with demography because it frames the important issues. But wider policies will determine success in the rest of this century.