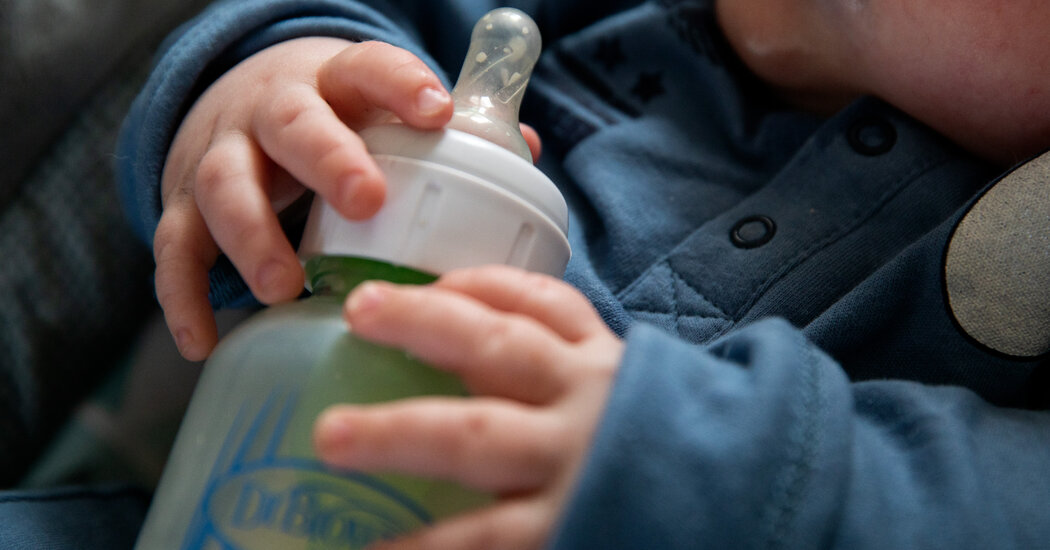 In the early 1990s, the nation’s biggest makers of baby formula were under fire.

The three largest manufacturers, which controlled 90 percent of the US market at the time, were hit with waves of state, federal and corporate lawsuits, accusing them of attempting to limit competition and using their control of the industry to fix prices. Most of the lawsuits were settled or, in some cases, won by the companies.

Three decades later, the $ 2.1 billion industry is still controlled by a small number of manufacturers, who are again in the cross hairs over their outsized market share.

The infant formula market was plunged into disarray when Abbott Laboratories voluntarily recalled some of its most popular powdered formulas in February and shut down its plant in Sturgis, Mich., After four babies who had consumed some of Abbott’s products became sick with bacterial infections.

Abbott, which controls 48 percent of the market, has said there was no evidence its formula caused any known infant illnesses and that none of the tests performed by regulators have directly linked the cans of formula the babies consumed to the strains of bacteria, Cronobacter sakazakii , found at the plant.

But the ripple effects from that single plant closing have been widespread, highlighting the market power of a single manufacturer and the lack of meaningful competition in an industry governed by rules and regulations designed to protect the incumbents.

Stores are limiting purchases of baby formula, with shelves in many markets completely bare. Panicked parents of newborns are calling on friends and family to help locate food for their babies, with some resorting to making their own formula at home. And while the Abbott plant was given the green light this week to start manufacturing again – a move that will still take weeks to rebuild inventory on store shelves – there are growing calls from lawmakers for major changes to how the industry operates.

“When something goes wrong, like it has here, you then have a major, serious crisis,” said Representative Rosa DeLauro, a Connecticut Democrat who released a scathing 34-page whistleblower report from a former Abbott employee detailing safety and cleanliness issues at the Sturgis plant. She argued that the industry should be broken up and efforts should be made to promote competition to avoid future shortages.

Senator Tammy Duckworth, an Illinois Democrat, urged the Federal Trade Commission last week to conduct a broad study of the infant formula industry and whether market consolidation has led to the dire shortages.

“We’ve got four companies making about 90 percent of the formula in this country, which we should probably take a look at.” Buttigieg said on CBS’s “Face the Nation.”

Today, Abbott is the biggest player. Mead Johnson, which is owned by the conglomerate Reckitt Benckiser, and Perrigo, which makes generic formula for retailers, control another 31 percent. Nestlé controls less than 8 percent.

In part, the lack of competition stems from simple math: Few companies or investors are eager to jump into the infant formula industry because its growth is tied to the nation’s birth rate, which held steady for decades until it began dropping in 2007.

But the factors that long ago led to the creation of an industry controlled by a handful of manufacturers are primarily rooted in a tangled web of trade rules and regulations that have protected the biggest producers and made it challenging for others to enter the market.

The United States, which produces 98 percent of formula consumed in the country, has strict regulations and tariffs as high as 17.5 percent on foreign formula. The Food and Drug Administration maintains a “red list” of international formulas, including several European brands that, if imported, are detained because they do not meet US requirements. Those shortcomings could include labels that are not written in English or do not have all of the required nutrients listed. This week, the FDA said it would relax some regulations to allow for more imports into the United States.

But perhaps the biggest barrier to new entrants is the structure of a program that aims to help low-income families obtain formula. The Special Supplemental Nutrition Program for Women, Infants, and Children, better known as WIC, is a federally funded program that provides grants to states to ensure that low-income pregnant or postpartum women and their children have access to food.

The program, which is administered by state agencies, purchases more than half of all infant formula supply in the United States, with about 1.2 million infants receiving formula through WIC.

State WIC agencies cannot just buy formula from any manufacturer. They are required by law to competitively bid for contracts and select one company, which becomes the exclusive provider of formula for all WIC recipients in the state. In exchange for those exclusive rights, manufacturers must provide states significant discounts for the formula they purchase.

David E. Davis, an economics professor at South Dakota State University, said that exclusive system could make it more difficult for smaller companies to break through. Although manufacturers may sell products to states below cost, Dr. Davis’s research found that brands that secure WIC contracts gain greater prominence on store shelves, creating a spillover effect and resulting in larger sales among families that are not WIC recipients. Doctors may also preferentially recommend those brands to mothers, his research found.

Only three companies have contracts to supply formula through the program: Abbott makes up the largest share, providing formula to about 47 percent of infants that receive WIC benefits, while Mead Johnson provides 40 percent and Gerber, which is manufactured by Nestlé, provides 12 percent , according to the National WIC Association.

Navigating the Baby Formula Shortage in the US

A growing problem. A nationwide shortage of baby formula – triggered in part by supply-chain issues and worsened by a recall by baby food manufacturer Abbott Nutrition – has left parents confused and concerned. Here are some ways to manage this uncertainty:

Finding formula. If your baby’s formula was not affected by the recall, but is still not available, you can try calling local stores to ask when they expect to get it back in stock. You may also be able to buy it online. If your baby is on special formula, reach out to your doctor’s office: They might have samples in stock.

Picking a new formula. If you typically use a name-brand formula, look for its generic version. Alternatively, seek a new formula that matches the ingredients listed in your usual one. If your baby is on a special formula for health reasons, check with your pediatrician before switching.

Transitioning to a new product. Ideally, you will want to switch your child gradually. Start by mixing three quarters of your usual formula with one quarter of the new one and gradually phase out the old product. If you can not transition gradually because you’ve run out of your usual formula, that’s OK, although you might notice more gassiness or fussiness during the transition.

What not to do. If you can not find your baby’s usual formula, do not make your own – homemade formulas are often nutritionally inadequate and at risk of contamination. Do not try to “stretch” your formula by adding extra water, and do not buy it from unvetted online marketplaces like Craigslist. For a baby less than 1 year old, do not use toddler formula.

In the early 1990s, the Federal Trade Commission filed a lawsuit against Abbott, accusing it and the other large manufacturers at the time, Mead Johnson and American Home Products, of price-fixing and bid-rigging in the process of bidding for state WIC contracts . Mead Johnson and American Home Products settled before the FTC brought its case against Abbott. Abbott won the case when a judge concluded that the company had not conspired or engaged in unfair competition in the auctions.

To help alleviate the shortage, the Agriculture Department has granted states waivers that would give WIC recipients more flexibility to choose alternative formula brands and sizes, although not every state has adopted all of the waivers.

While the bidding process could be limiting competition, the federal government saves about $ 1.7 billion each year with states negotiating for rebates. Tiare Sanna, the director of Oregon’s WIC program, said that mothers in the state are now facing difficulty finding formula because the state contracts with Abbott, but the bidding system normally allows the state to serve a greater number of participants because it is able to buy more formula at the discounted rate.

“If we had to use our WIC food dollars to purchase formula at shelf price, we would have to significantly decrease the amount of participants that we serve,” Ms. Sanna said. “So this is a means of allowing us to serve the greatest amount of infants as possible but I do acknowledge that it can create some issues.”

The Biden administration has announced a series of steps to address the shortages, including invoking the Defense Production Act to ramp up manufacturing and deploying Defense Department plans to speed shipments to the United States. A White House official said on Friday evening that the first flights in what the Biden administration is calling Operation Fly Formula would leave Ramstein Air Base in Germany over the weekend, bound for Indianapolis. The flights will deliver Alfamino Infant and Alfamino Junior formulas, the official said.

Still, officials acknowledged on Thursday that the shortage was expected to persist into next month, in large part because the Abbott plant has yet to restart production.

Many Republicans, including Senator Mitch McConnell, the minority leader, have blamed President Biden for the shortages, saying the administration should have moved more quickly to limit the fallout from the plant closing.

Those who have tried to break into the infant formula market say the current situation shows the need for more competition and changes to rules that appear intent on thwarting new entrants.

“What I discovered is that this is a very convoluted, complex and slightly corrupted industry,” said Laura Modi, an entrepreneur who, after the birth of her first child in 2016, decided to create a European-style, organic infant formula company that she believed would provide a better option than what was available in the States.

After a series of fits and starts, including a voluntary recall of an initial product for toddlers manufactured in Germany and sold in the United States, her company, Bobbie, received regulatory approval and started selling its infant formula online to American consumers last year.

“It’s not a growing market. It has incumbents who have their footholds in the market in a strong way, ”she said.

“Without competition,” Ms. Modi said, “the incumbents are not incentivized in any way to evolve.”