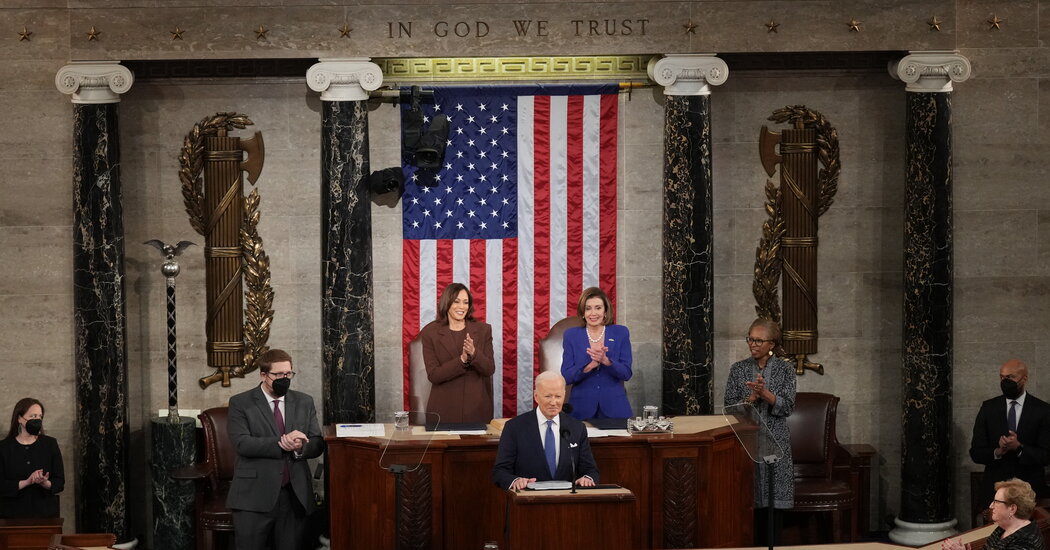 WASHINGTON – President Biden vowed on Tuesday to make President Vladimir V. Putin of Russia “pay a price” for invading Ukraine, seeking to rally the world as Moscow’s forces rained down missiles on Ukrainian cities and prepared to lay siege to the capital of Kyiv.

Appearing before a joint session of Congress at a fraught moment in modern history, Mr. Biden called for a united resistance to defend the international order endangered by Russian aggression and warned the oligarchs who bolster Mr. Putin’s regime that he would seize their luxury yachts and private jets.

“Six days ago, Russia’s Vladimir Putin sought to shake the very foundations of the free world, thinking he could make it bend to his menacing ways,” Mr. Biden said. “But he badly miscalculated. He thought he could roll into Ukraine and the world would roll over. Instead, he met with a wall of strength he never anticipated or imagined. He met the Ukrainian people. ”

Hailing the heroism of the Ukrainian resistance, Mr. Biden introduced Oksana Markarova, Ukraine’s ambassador to the United States, who joined Jill Biden in the first lady’s box holding a small blue-and-white Ukrainian flag. In a show of bipartisan solidarity, lawmakers on both sides of the aisle, some of them wearing blue and yellow and many of them waving Ukrainian flags, leapt to their feet in an ovation to her and her country.

While the guns of Europe overshadowed the political disputes at home that have weighed down his presidency, Mr. Biden sought to use his first formal State of the Union address to persuade glum Americans that the country is making impressive progress containing the coronavirus pandemic and rebuilding the economy.

He made a fresh pitch for the social spending programs that have been logjammed in Congress, including expanded child care, elder care, prekindergarten education, climate change initiatives and prescription-drug price cuts, without explaining how he planned to overcome the opposition. And he vowed to take action to curb inflation, saying “my top priority is getting prices under control.”

Two years after the pandemic transformed American life, Mr. Biden declared that “we’ve reached a new moment in the fight against Covid-19,” and he generated bipartisan applause by calling for schools to remain open. “Our kids need to be in school,” he said. Yet he warned against complacency and called on lawmakers who have demonstrated unity over Ukraine to put aside their differences at home.

“Let’s use this moment to reset,” he said in the hourlong speech. “So stop looking at Covid as a partisan dividing line. See it for what it is: a God-awful disease. Let’s stop seeing each other as enemies and start seeing each other for who we are: fellow Americans. ”

But the discord of today’s politics erupted in the House chamber in ways that would have once been unthinkable. When Mr. Biden talked about immigration reform, Representative Lauren Boebert, a far-right Republican from Colorado given to angry spectacle and conspiracies, tried to start a “build the wall” chant but was joined only by a like-minded colleague, Representative Marjorie Taylor Greene, Republican of Georgia.

Later in the speech, when Mr. Biden was paying tribute to American troops in flag-draped coffins, Ms. Boebert interrupted again. “You put them in – 13 of them!” she shouted, referring to service members killed during the withdrawal from Afghanistan last year. Mr. Biden did not respond, but went onto cite his son, Beau, who served in Iraq and later died of brain cancer.

No president had delivered his State of the Union address with such a large-scale and consequential land war underway in Europe since 1945, and Mr. Biden faced the challenge of holding together multinational and bipartisan alliances to counter Mr. Putin. But even before he arrived in the House chamber, congressional negotiations over an aid package bogged down in a partisan quarrel.

Mr. Biden announced that he would ban Russian planes from American airspace and agreed with foreign counterparts to release a cumulative 60 million barrels of oil from their strategic petroleum reserves to try to curtail gasoline price increases stemming from the war. Private companies continued to flee the Russian market, while Apple cut off sales of its products and Universal and Paramount joined other Hollywood studios in suspending movie releases there.

Mr. Biden, who has teamed up with European leaders to impose sanctions not just on Russian institutions but on Mr. Putin personally, highlighted the unified response to Russia’s invasion. “Putin’s latest attack on Ukraine was premeditated and totally unprovoked,” he said. “He rejected repeated, repeated efforts at diplomacy. He thought the West and NATO would not respond. He thought he could divide us at home in this chamber and this nation. He thought he could divide us in Europe as well. But Putin was wrong. We are ready. We are united. ”

He said Mr. Putin and his cronies should not go unpunished. “Throughout our history, we’ve learned this lesson – when dictators do not pay a price for their aggression, they cause more chaos,” Mr. Biden said. “They keep moving. And the costs, the threats to America, and America to the world, keeps rising. ”

Mr. Biden directly threatened the moneyed moguls who prop up Mr. Putin while keeping their money and enjoying life in the West. “Tonight, I say to the Russian oligarchs and the corrupt leaders who bilked billions of dollars off this violent regime: No more,” he said, adding, “We’re joining with European allies to find and seize their yachts, their luxury apartments , their private jets. ”

The speech, an annual rite of passage for any commander in chief, was originally envisioned as an opportunity for Mr. Biden to rejuvenate his presidency with new energy after months of political and economic travails at home, and the White House was loath to let the foreign crisis completely overwhelm his domestic agenda.

In a sign of the times, the speech took place in a Capitol once again ringed by security fences and National Guard troops, almost 14 months after the building was stormed by a violent mob egged on by President Donald J. Trump in an effort to stop the counting of Electoral College votes sealing Mr. Biden’s victory.

But in a more hopeful indicator, all members of Congress were invited and the chamber was fuller than last year, when the audience was limited to a fraction of its usual size out of concern over Covid-19. While testing was required and every other seat was supposed to be left vacant to encourage social distancing, masks were optional and only a few lawmakers covered their faces.

For only the second time in history, two women stood behind a president on the rostrum, Vice President Kamala Harris and Speaker Nancy Pelosi, and Mr. Biden hailed his nomination of Judge Ketanji Brown Jackson, who would become the first Black woman to serve on the Supreme Court.

Mr. Biden spoke in a strong voice but stumbled occasionally over his words. At different points, he said “Iranian” when he meant “Ukrainian,” “America” ​​when he meant “Delaware” and “profits” when he meant “prices.” But he appeared energized by the crowd and lingered afterward to chat with lawmakers.

The speech came at a politically shaky moment for him and for the country. After two years of struggling with the pandemic and related economic troubles, the state of the union is sour. Fully 70 percent of Americans surveyed by The Associated Press-NORC Center for Public Affairs Research said the nation was heading in the wrong direction, the kind of number that typically spells trouble in a midterm election year for the party in power.

Mr. Biden has lost the confidence of many Americans since taking office. His approval rating in recent days has been measured anywhere from 44 percent by The AP and NORC to as low as 37 percent by The Washington Post and ABC News. Judging by Gallup’s numbers, no elected president in modern times had been as low at this point in his tenure other than Mr. Trump.

Mr. Biden has struggled to command public support in a time of intense polarization, with Republicans staunchly resisting his legislative agenda and Mr. Trump relentlessly refuses to accept defeat and spreading lies about the 2020 election that have been accepted by many Americans.

Moreover, the tradition of rallying around the president during a crisis has long since faded, and many Americans view the conflict with Russia through a partisan lens. Just 3 percent of voters who supported Mr. Trump in 2020 say Mr. Biden is doing a better job leading his country than Mr. Putin is leading his own, according to a poll by Yahoo News and YouGov, while 47 percent believe the Russian leader is doing better than their own president.

While some have pressed him to be even tougher and criticized him for not taking action sooner, Mr. Biden has generally enjoyed bipartisan backing from lawmakers as he imposes economic sanctions on Russia and sends American troops to NATO allies near Ukraine to reassure them. His comments castigating Moscow prompted that rarest of scenes during a State of the Union: both sides of the aisle rising to applaud.

“I think there’s broad support for the president in what he’s doing now,” Senator Mitch McConnell, Republican of Kentucky and the minority leader, told reporters before the speech. “Our biggest complaint is, what took him so long?”

Yet talks over a $ 6.4 billion security and humanitarian aid package for Ukraine stalled in the Senate over whether the money should come out of the same total military spending allocation previously agreed to or be considered emergency money on top of that. “We’ve hit a snag,” Mr. McConnell reported.

Gov. Kim Reynolds of Iowa, who delivered the official Republican response after the speech, more aggressively laid the blame for Russia’s invasion at Mr. Biden’s feet. “Weakness on the world stage has a cost, and the president’s approach to foreign policy has consistently been too little, too late,” she said.

In a sign of the complicated political landscape, Mr. Biden was followed not just by Ms. Reynolds, but also by separate responses by several members of his own party: Representative Rashida Tlaib of Michigan for the progressive Working Families Party, Representative Colin Allred of Texas for the Congressional Black Caucus and Representative Josh Gottheimer of New Jersey for the bipartisan group No Labels .

The president returned to the same chamber where he unveiled his ambitious $ 1.8 trillion social spending package to great fanfare a year ago only to watch it go nowhere amid lock-step Republican opposition and the defection of two moderate Democratic senators.

To make the case for lowering the price of prescription drugs, he singled out Joshua Davis, a Virginia boy who has diabetes and needs daily insulin that costs his family considerably. Joshua, who just turned 13, smiled from the first lady’s box as Mr. Biden wished him a happy birthday.

Mr. Biden presented an upbeat assessment of the country, talking about “the rebirth of pride” and “the revitalization of American manufacturing.” He sought to reassure Americans feeling the pain of rising inflation, which has taken a toll on his political standing as well, vowing to bring down prices by driving up production.

But even as he promoted an agenda appealing to progressives, Mr. Biden appeared intent on reminding voters of his centrist pedigree too. Citing protests against law enforcement abuse of people of color, Mr. Biden said that “the answer is not to defund the police,” but to reform their practices.

Mr. Biden unveiled few concrete new domestic initiatives other than promising to appoint a special prosecutor to investigate fraud involving pandemic relief funds. But he emphasized that while there may be new variants, “Covid-19 no longer need control our lives.”

The average number of new coronavirus cases has fallen more than 90 percent since its January peak, and deaths have come down 23 percent in the past two weeks. Even so, more than 1,800 people are still dying from Covid every day in the United States on average, and Mr. Biden tried to be careful not to sound too rosy.