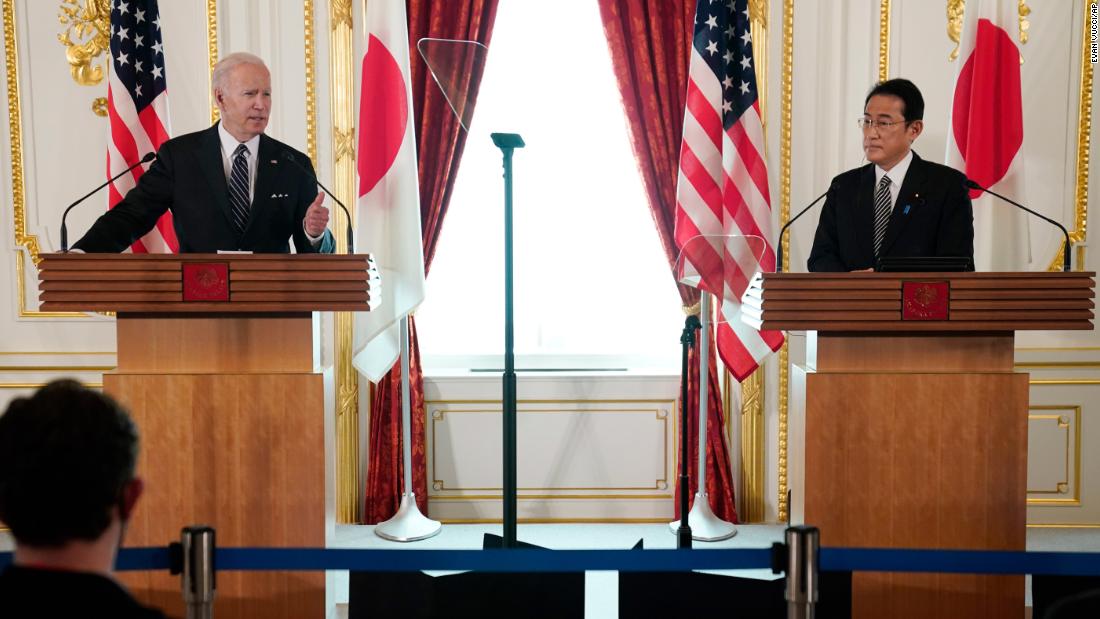 “That’s the commitment we made – look, here’s the situation,” Biden told reporters during a joint press conference with Japanese Prime Minister Fumio Kishida. “We agree with the One China policy. We signed on to it, and all the attendant agreements made from there, but the idea that it can be taken by force, just taken by force, is not just appropriate.”

The President has made similar statements in the past, only to have the White House say longstanding US policy had not changed toward the self-governing island. The US provides Taiwan defensive weapons, but has remained intentionally ambiguous on whether it would intervene militarily in the event of a Chinese attack.

Under the “One China” Policy, the US acknowledges China’s position that Taiwan is part of China, but has never officially recognized Beijing’s claim to the island of 23 million.

In a statement following Biden’s remarks Monday, a White House official said the US’s official position remained unchanged. “As the President said, our policy has not changed. He reiterated our One China Policy and our commitment to peace and stability across the Taiwan Strait. He also reiterated our commitment under the Taiwan Relations Act to provide Taiwan with the military means to defend itself , “said the official.

Taiwan lies less than 110 miles (177 kilometers) off the coast of China. For more than 70 years the two sides have been governed separately, but that has not stopped China’s ruling Communist Party from claiming the island as its own – despite having never controlled it.

In recent weeks, Beijing has sent dozens of warplanes near into Taiwan’s Air Defense Identification Zone (ADIZ), and Chinese leader Xi Jinping has said that “reunification” between China and Taiwan was inevitable while refusing to rule out the use of force.

Biden compared a potential invasion of Taiwan by China to Russia’s invasion of Ukraine earlier this year, warning, “It will dislocate the entire region,” and emphasizing “Russia has to pay a long-term price for its actions.”

“And the reason I bother to say this, not just about Ukraine – if in fact after all he’s done, there’s a rapprochement … between the Ukrainians and Russia, and these sanctions are not continued to be sustained in many ways, then what signal does that send to China about the cost of attempting, attempting to take Taiwan by force? “

Biden said that China is “already flirting with danger right now by flying so close and all the maneuvers they’re undertaking.”

“But the United States is committed, we made a commitment, we support the One China policy, we support all we’ve done in the past, but that does not mean, it does not mean that China has the ability, has the, excuse me, jurisdiction to go in and use force to take over Taiwan, “he added.