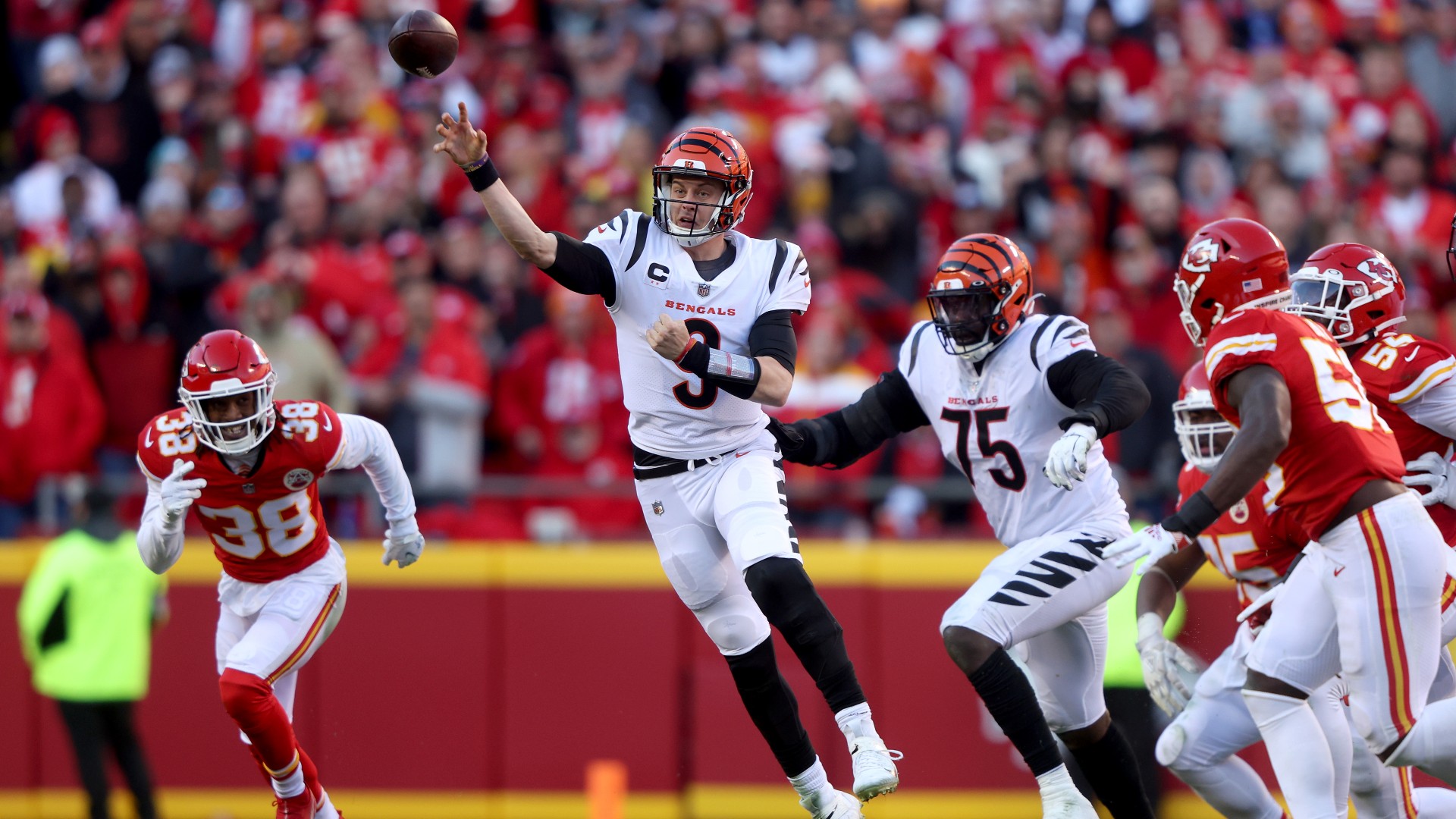 Back in Week 17, the Bengals went into the locker room at halftime trailing the Chiefs 28-17.

Cincinnati needed to win to clinch the AFC North a year after finishing in the cellar of the division and posting the fifth-worst record in the NFL. The Bengals rallied, outscoring Patrick Mahomes and the Chiefs 17-3 in the second half. The final three came on a walk-off field goal.

Kansas City was up big again in Sunday’s AFC championship game. It was ahead 21-3 at one point in the first half and it took a 21-10 lead into the second half. But again, the Chiefs were held to just three points, a last-second game-tying field goal to send the game to overtime, after the Bengals scored 14 points to take the lead.

The Bengals did not stop there. They intercepted Mahomes in overtime and drove downfield to set up for the game-winning field goal that sent the Bengals to Super Bowl 56 a 27-24 victory over the two-time reigning conference champions.

MORE: When is the last time the Bengals went to a Super Bowl?

“I do not know if you ever want to get down 21-3. I said earlier in the year when we started making some of these comebacks, never feel like we’re out of it, but obviously 21-3 isn’t exactly the most exciting position to be in, “Bengals quarterback Joe Burrow said after the game.

The Bengals have been kings of the comeback all season, but Sunday’s performance ranks among the greatest in NFL postseason history. Sporting News breaks down how the Bengals got it done.

At one point, the Bengals were trailing the Chiefs by 18 in the unfriendly confines of Arrowhead Stadium.

The Chiefs scored touchdowns on each of their first three drives, with Mahomes throwing scoring passes to Tyreek Hill, Travis Kelce and Mecole Hardman. The latter score put Kansas City up 21-3 with 5:04 remaining in the first half.

The initial spark for the Bengals’ comeback occurred with just over a minute left in the second half. Burrow found Samaje Perine on a short screen pass that the backup running back took 41 yards down the right side for the team’s first touchdown.

The Chiefs marched back down the field and appeared on the verge of scoring a touchdown to bring their lead back up to 18, but cornerback Eli Apple stuffed Hill at the Cincinnati 1-yard line and kept him from getting into the end zone or out of bounds. The clock wound down to zero on the play.

“When our defense makes that play, and we’re down 11, just like we were four or five weeks ago against the Chiefs, 11 going into halftime, we knew we were going to be able to go win that game,” coach Zac Taylor said.

The second half began with three consecutive points and then a field goal by Cincinnati to bring it to a one-score game. Mahomes got the ball back with his team leading 21-13, but he threw a tipped interception to defensive tackle BJ Hill that gave the Bengals the ball back with 2:23 left in the third quarter.

Cincinnati responded in short order, with Burrow finding Ja’Marr Chase for a 17-yard gain to set up a touchdown pass by the LSU connection three plays later. That made it a 21-19 game. Burrow then hit Trent Taylor on an out route for the 2-point conversion to knot it up.

The Bengals forced a three-and-out by the Chiefs but gave the ball right back on an interception. The defense again forced another point and the offense responded with a 6-minute, 23-second drive that ended with a field goal to give the Bengals a 24-21 lead with 6:04 left in the game.

Mahomes took the rest of the time off the clock as he drove his team down the field. Kansas City had a first-and-goal with 1:26 left, but the Bengals’ defense again came up strong, with Sam Hubbard sacking Mahomes on back-to-back plays to force the Chiefs to kick a game-tying field goal.

Kansas City won the coin toss in overtime, and it began to feel like deja vu from the week prior when the Chiefs marched down the field to score on the first drive to walk off the Bills. But this time, Mahomes was nearly intercepted by Apple on his second pass attempt of the drive, and then he was picked off on the next play by Vonn Bell as he tried to get the ball to Hill. The Bengals took over at their 45 just 14 seconds into overtime.

“Just knowing the guys, who they go to, who [Mahomes] go find? It’s [Hill] spirit [Kelce]. Just knowing the situation. And that’s when he tried to go to 10 at the end of the game and Jessie [Bates] broke it up and I just finished it off, just running to the ball man, “Bell said.” We never quit. Never quit fighting and we never back down from the challenge. “

MORE: Revisiting the 12 playoff games that have gone to OT since 2010 rule change

Unlike earlier in the game, Cincinnati had no problems marching downfield. They got to the Chiefs’ 10. Bengals rookie kicker Evan McPherson sealed the win with a 31-yarder.

A major part of the turnaround was bottling up Mahomes. He completed 18 of 21 passes for 220 yards and three touchdowns in the first half. He was held to 8-of-18 passing with 55 yards, no touchdowns and a pair of picks in the second half and OT.

There have been plenty of incredible postseason comebacks, and Cincinnati’s will certainly rank among the most memorable.

The Oilers led the Bills 35-3 with under 10 minutes left in the third quarter, and then watched that lead go away. Buffalo scored 35 consecutive points before allowing a late field goal that tied the game 38-38. The Bills kicked an overtime field goal to win the game. They went on the third of four consecutive Super Bowls.

Perhaps the most memorable comeback in recent years was the Patriots’ rally in Super Bowl 51, when they were down 28-3 and then came back to win 34-28 in overtime.