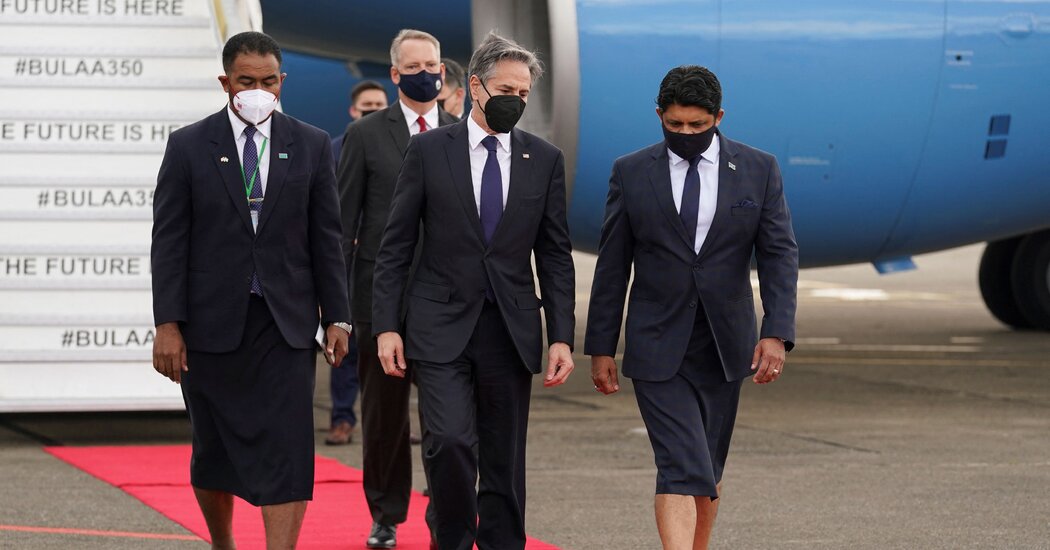 NADI, Fiji – As the first US secretary of state to visit Fiji in 36 years, Antony J. Blinken wanted to make clear that jetting here to meet with Pacific island leaders was just the start of an expanding American presence.

“We see our long-term future in the Indo-Pacific,” he said. Blinken said at a news conference on Saturday night, standing next to Fiji’s acting leader. “It’s as simple and basic as that.”

Mr. Blinken said the United States would soon open an embassy in another Pacific nation, the Solomon Islands. He pledged more American help on climate change, Covid vaccines and illegal fishing, all issues vital to the region.

But at their core, the commitments reflected American concerns about China, and an attempt to compete in a sparsely populated but strategically important area where Beijing has been expanding its influence.

Aiyaz Sayed-Khaiyum, the acting prime minister of Fiji, welcomed the renewed American engagement. “America is uniquely positioned to be a direct partner to Fiji for peace and climate security,” he said. “We need American might and its mind as well as pioneering solutions and investments.”

The Pacific island nations are spread across a broad area, between Hawaii, Asia and Australia. They prize their sovereignty and want to be seen as autonomous actors. Yet they, like many other small countries, are becoming increasingly enmeshed in the global competition between the United States and China.

“While there are important differences between Pacific island countries, there is a clear understanding, even if they do not admit it, that they are caught up in an intensifying geopolitical rivalry,” said Iati Iati, a senior lecturer and Pacific security fellow at the Victoria University of Wellington in New Zealand.

The island nations are diverse, but they have common concerns: slowing the sea-level rise that threatens to drown their low-lying lands; preserving the fisheries and ocean resources that bring them food and revenue; containing the spread of Covid-19; and strengthening their own infrastructure, investment and governance.

Fiji was the second stop on Mr. Blinken’s weeklong trip across the region, which is meant to signal that the Asia-Pacific is the primary focus of President Biden’s foreign policy.

As he was leaving Australia for Fiji, the White House released an 18-page paper on its so-called Indo-Pacific strategy, emphasizing a need to “shape the strategic environment” in which China operates. That includes promoting democratic institutions and civil society in the region, as well as helping countries “deploy advanced war-fighting capabilities,” according to the document.

The United States has long had an on-and-off presence in the Pacific island chains. American troops built airfields and hospitals while fighting Japan in the region in World War II, but the United States generally receded afterwards, especially from South Pacific countries like Fiji.

“The fact is, they have not been present in this space for a long time now,” Mr. Sayed-Khaiyum said in an interview.

Under President Donald J. Trump, US officials overseeing Asia policy said they feared China would use the promise of prosperity, as well as coercion, to bring certain islands into their sphere of influence and set up military bases in the region, following in the footsteps of Japan almost a century ago.

That would block the American military’s ability to island-hop and deploy forces quickly to Asia in the event of war, they said.

Biden administration officials also say they are concerned about China’s military and security plans for the region.

Violent protests broke out in November in the Solomon Islands, where for many years Beijing had cultivated officials with loans, aid and favors, leading to frustration among some provincial leaders about the cozy relationship. Four people were killed during the protests in the capital, Honiara, and many Pacific island countries with a growing Chinese presence worrying that tensions could rise elsewhere over what is often called “elite capture” – that is, a power like Beijing essentially buying influence with politicians and business leaders.

American officials, both Republican and Democrat, have expressed concern that one of China’s main ways of gaining leverage in the region is through what they call “debt-trap diplomacy”: lending money after lavishing attention on decision makers, then issuing demands of governments that struggle to pay it back.

For countries often seen as mere dots on the map, China’s interest has been hard to resist. When Xi Jinping, China’s leader, visited Fiji’s capital in 2014 and addressed many of the region’s leaders, he promised friendship and infrastructure, encouraging them to board “the Chinese express train of development.”

Many did. Large construction projects followed, on roads, port improvements and sports stadiums, much of it linked to heavy debt. In Fiji’s capital, Suva, the bridge to the main market was rebuilt with financing from China’s so-called Belt and Road Initiative. Queen Elizabeth Drive, the coastal thoroughfare that passes major government buildings (and China’s new embassy), is being repaired by a Chinese state-owned engineering firm.

But there are signs of fading enthusiasm. Fiji’s government recently shut down construction of what was to be Suva’s tallest building: the Wanguo Friendship Plaza, an apartment tower being built by a private Chinese company. It is an empty shell; Fiji halted the development over complaints of falling rubble and other problems.

“The honeymoon is over,” said Jonathan Pryke, director of the Pacific Islands program at the Lowy Institute in Sydney, Australia.

America’s main regional allies, Australia and New Zealand, have stepped up their own efforts in the islands with aid and investment. Australia’s largest telecommunications company, Telstra, agreed a few months ago to buy the Pacific operations of Digicel, the region’s largest mobile phone network, in a deal funded by the Australian government.

A tense era in US-China ties. The two powers are profoundly at odds as they jockey for influence beyond their own shores, compete in technology and maneuver for military advantages. Here’s what to know about the main fronts in US-China relations:

Pacific dominance. As China has built up its military presence, the US has sought to widen its alliances in the region. A major potential flash point is Taiwan, the democratic island that the Communist Party regards as Chinese territory. Should the US intervene there, it could reshape the regional order.

Trade. The trade war started by the Trump administration is technically on pause. But the Biden administration has continued to protest China’s economic policies and impose tariffs on Chinese goods, signaling no thaw in trade relations.

Technology. Internet giants have mostly been shut out of China, but plenty of US tech companies still do big business there, raising cybersecurity concerns in Washington. Mr. Xi has said China needs to achieve technological “self-reliance.”

But the island governments are turning to larger powers for help on climate change. Global warming has led to rapidly rising waters around the islands, and a surge of destructive storms.

“While people are still recovering from one cyclone, you have another one,” said Frances Namoumou, the head of climate justice programs at the Pacific Conference of Churches in Suva. “The frequent occurrence of these disaster impacts, exacerbated by climate change – that is what we know.”

Mr. Blinken, in his comments on Saturday after meeting with Pacific leaders via video, described climate change as a security threat, as did Fijian officials. They argued that the most important thing the United States could do was to make it easier for Pacific countries to access money to prepare for, and respond to, climate disasters.

Critics worry that the Americans, despite a lot of talk about climate resilience, may focus on the more traditional element of military security.

“Very often, there’s this notion that the American security interest is paramount and that once you know that, it’s just about selling it to the people who occupy the land and harbors,” said Richard Herr, an American law professor at the University of Tasmania who has advised Pacific governments for decades.

“But islanders’ first priority has always been development – that brass ring of a brighter future for themselves and their kids,” he added. “They’re not looking through a security lens.”

One of the most tangible elements of the American strategy for the Pacific islands involves deploying Coast Guard ships to the region under “shiprider” agreements, which allow the local authorities to board American vessels and enforce local and international fishing laws.

The decision to open an embassy in the Solomon Islands also seems driven by concerns about security, as well as about another problem often identified by critics of American engagement in the region: a lack of diplomatic resources.

The US embassies in Fiji and in Australia both lack permanent ambassadors, in part because Republicans in Congress have held up Mr. Biden’s appointments. American political dysfunction is widely seen in Asia as hindering American efforts abroad; islanders will watch for how quickly Washington can get an ambassador and a sizable staff to the Solomon Islands, and for how soon Mr. Blinken’s visit and promises will lead to measurable results.

“What is really good is that they have now stepped into space,” said Mr. Sayed-Khaiyum, Fiji’s acting prime minister, after meeting with Mr. Blinken. “We know they can not do that overnight, but there seems to be a very strong philosophical commitment.”