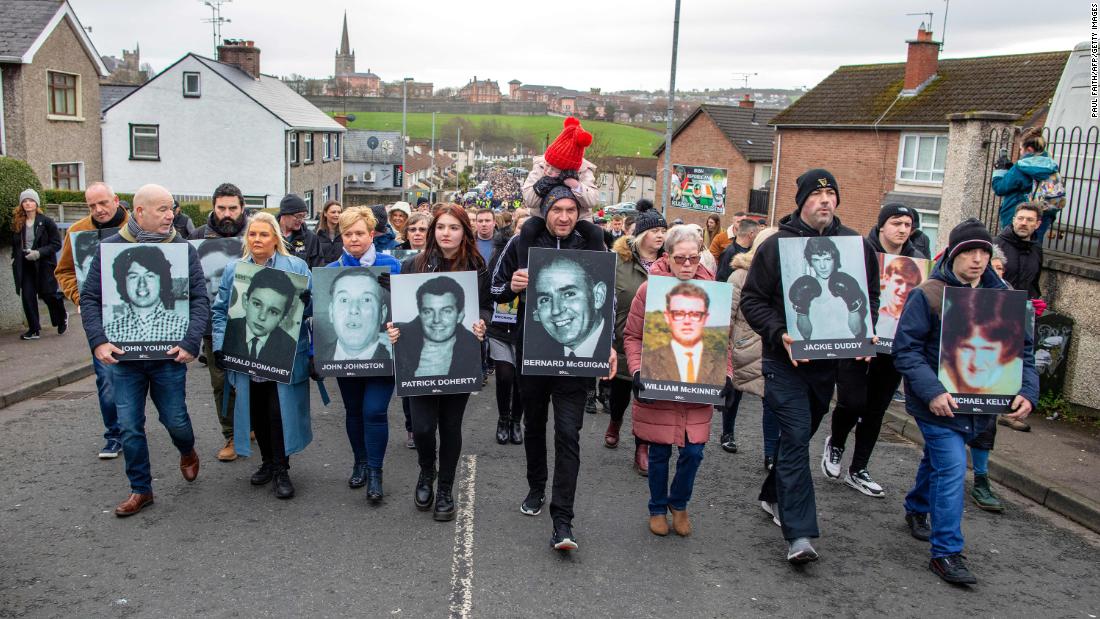 Family and friends of the 13 Catholics who died in Londonderry on Bloody Sunday, January 30, 1972 – and of a 14th who died later of his wounds – gathered this week for a series of commemorations to mark the event that helped fuel three decades of bitter sectarian and political violence.

While a judicial inquiry found in 2010 that the victims were innocent and had posed no threat to the military, the commemorations come just months after prosecutors announced that the only British soldier charged with murder will not face trial.

“Our generation are very slowly dying off … and we would like to see it [justice] when we’re still alive, “said Jean Hegarty, whose brother Kevin McElhinney was shot dead aged 17.

She supports legal action to bring the soldier to trial.

“My head would say no, but my heart would still like to believe that we can see at least some soldiers face a court,” she said.

Northern Ireland’s 1998 peace process has been hailed around the world for its success in largely ending a conflict in which more than 3,000 people were killed.

Irish nationalist militants seeking unification with the Republic of Ireland faced off against the British Army and loyalists determined to keep the British province.

Even the name of the city that Bloody Sunday occurred in has serves as a sign of the divisions that have haunted Northern Ireland for many years, as pro-Irish nationalists call it Derry and pro-British unionists call it Londonderry.

And nearly a quarter of a century after the peace, the bitterness lingers.

A number of flags of the British Army’s Parachute Regiment, whose members shot the protesters, were hung from lamp posts in the city in the run-up to the commemorations, something that has become an annual ritual. The regiment condemned the action.

While the Irish Republican Army (IRA) was responsible for about half of the deaths in the conflict, nationalists argue the violence was spurred by a repressive state that denied them their rights – and rarely more vividly than on Bloody Sunday.

Commemorations this weekend include a memorial service on Derry’s main square and a play centered on a famous photograph of priest Edward Daly holding up a white handkerchief to British soldiers as men tried to carry a dying man to safety.

The play will be performed entirely by locals in a city where January 30 retains a “real deep poignancy,” said director Kieran Griffiths, who worked closely with the relatives.

Gleann Doherty – whose father Patrick was among those killed on Bloody Sunday – believes the relatives have been given more closure than most impacted by the conflict. The detailed inquiry led Britain’s then-Prime Minister David Cameron in 2010 to apologize for the “unjustified and unjustifiable killings.”

The current British government last year announced a plan to halt all prosecutions of soldiers and militants in a bid to draw a line during the conflict – a move that angered relatives and has been rejected by all the main local political parties.

“We’re sort of one of the lucky – if you can call it lucky – ones to have some sort of answers to what happened,” said Doherty.

“It’s fairly difficult to get any sort of reconciliation … when you have the British government trying to close the door on any possibility” of justice, he added.