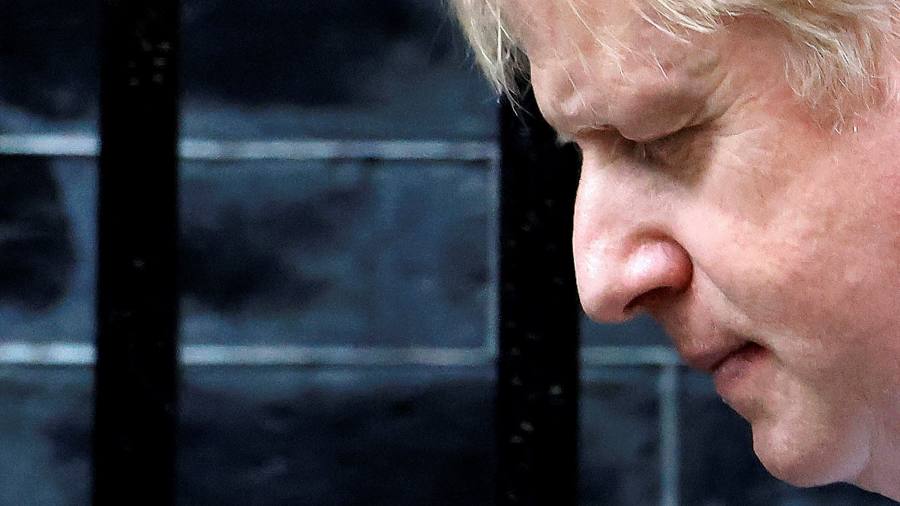 A forged Turkish proverb goes around: “When a clown moves into a palace, he does not become a king. The palace will be a circus. ”

Well, a circus would be more organized than what happened in the British government this week. We have a broken swing and a clown who barely has enough balls to juggle with. Cirque du Soleil, it is not.

After four officials withdrew from Downing Street on Thursday, a younger finance minister was asked by a news anchor if it felt like the last days in Rome. “No, it does not,” he replied. “The last days in Rome, I think, were more fun.” Given that these days involved military defeat, spiral corruption and hunger, that’s all the insight we need into the mood in Westminster.

Apart from a miracle, these are Boris Johnson’s last days: Churchill imitator, the Ministry of Finance’s first fraud, the man who forgot to be a Heineken politician was only a metaphor. We knew it would end badly, and it is now. It is so bad that there are not enough female officials to act as scapegoats; some men also have to resign.

On Monday, we were told that police are now investigating 12 parties on Downing Street, including at least four in which Johnson himself participated. He responded by promising to reform the government’s “leadership structures” as if an organization chart could remind him not to bring his own spray. There would be a new “Prime Minister’s Office” – a department to revel in, if you will. But Australian strategist Lynton Crosby is reportedly among those refusing to join.

This is the small flaw in the idea that Johnson can rule the country by delegating all the real work: What happens when there is no one left who wants to be delegated to? Meanwhile, only this Prime Minister’s government was able to publish a 101-page document on the benefits of Brexit in the same week that Northern Ireland’s Prime Minister resigns over the Brexit agreement.

Some of the annoyance with Johnson is over the top. A cake in the closet is not a reprehensible offense. But the parties summed up his stance on politics and life: that rules are for other people.

This week, I saw him make three misleading statements in Parliament: he said Britain has “the fastest growth in the G7” (technically true, but only because its economy collapsed further during the pandemic); that the government has reduced crime by 14 percent (in fact, it has increased 14 percent – theft decreased, mainly due to lockdowns), and that “more people [are] in work now than before the pandemic began ”(when self-employed people are included, the number is down by 600,000). It is before his false insinuation that Labor leader Keir Starmer was involved in the lack of prosecution of pedophile Jimmy Savile.

One cannot conduct political debate like this. Munira Mirza, No 10’s political chief, cited the “inappropriate and biased reference” to Savile as her reason for quitting. These unworthy untruths are the reason why Tory MPs within weeks or possibly a few months will take a stand against Johnson: you can call it the Porky Pie Plot.

When your most vocal loyalist is Culture Secretary Nadine Dorries, it’s time to go. Instead, Johnson hangs around, a guest is unable to realize that the dinner party ended an hour ago. We could open another bottle, or alternatively he could just toot?

He’ll be fine. The Telegraph wants him back. What about the rest of us? The city of Rotterdam is considering dismantling a historic bridge so that Jeff Bezos’ superyacht, built at its shipyards, can reach the sea. The bridge could be rebuilt just as it was. If only British democracy could be so easily adapted to the review of Johnson’s 417 ft superego. Instead, it is smashed through the structures. Good riddance.