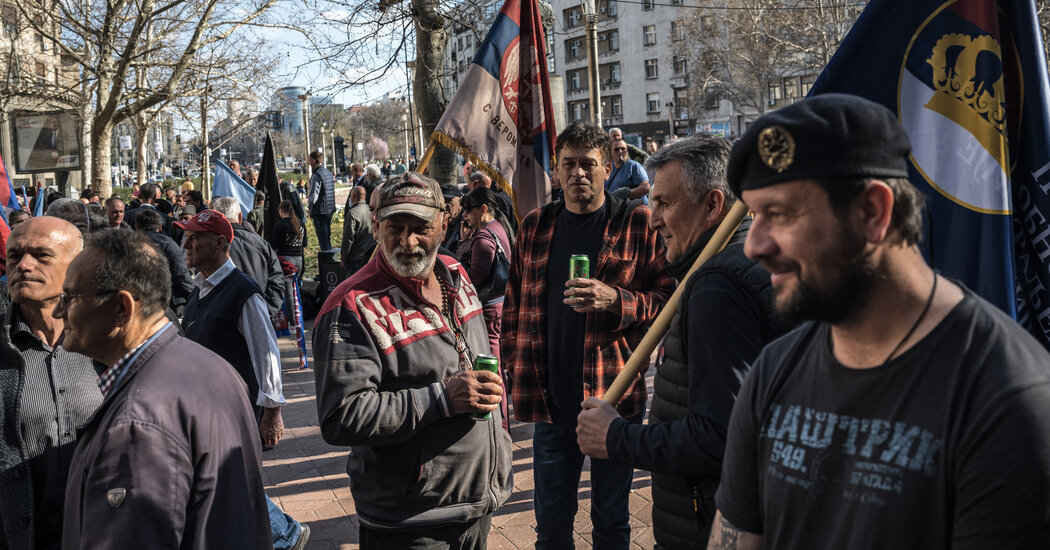 BELGRADE, Serbia – Mindful of the angry and still-unhealed wounds left by NATO’s bombing of Serbia more than 20 years ago, Ukraine’s ambassador appeared on Serbian television after Russia invaded and bombed his country in the hope of rousing sympathy.

Instead of getting time to explain Ukraine’s misery, however, the ambassador, Oleksandr Aleksandrovych, had to sit through rants by pro-Russian Serbian commentators, and long videos of Russia’s president, Vladimir V. Putin, denouncing Ukraine as a nest of Nazis. The show, broadcast by the pro-government Happy TV, lasted three hours, more than half of which featured Mr. Putin.

Angry at the on-air ambush, the ambassador complained to the producer about the pro-Kremlin propaganda exercise, but was told not to take it personally and that Mr. Putin “is good for our ratings.”

That Russia’s leader, viewed by many in the West, including President Biden, as a war criminal, serves in Serbia as a lure for viewers is a reminder that the Kremlin still has admirers in Europe.

While Germany, Poland and several other EU countries display solidarity with Ukraine by flying its flag outside their Belgrade embassies, a nearby street pays tribute to Mr. Putin. A mural painted on the wall features an image of the Russian leader alongside the Serbian word for “brother.”

Part of Mr. Putin’s allure lies in his image as a strongman, an appealing model for President Aleksandr Vucic, the increasingly authoritarian leader of Serbia, and Prime Minister Viktor Orban, the belligerently illiberal leader of Hungary. Facing elections on Sunday, the Serbian and Hungarian leaders also look to Russia as a reliable source of energy to keep their voters happy. Opinion polls suggest both will win.

Then there is history, or at least a mythologized version of the past, that, in the case of Serbia, presents Russia, a fellow Slavic and Orthodox Christian nation, as an unwavering friend and protector down the centuries.

But perhaps most important is Mr. Putin’s role as a lodestar for nations that, no matter what their past crimes, see themselves as sufferers, not aggressors, and whose politics and psyche revolve around cults of victimhood nurtured by resentment and grievance against the West.

Arijan Djan, a Belgrade-based psychotherapist, said she had been shocked by the lack of empathy among many Serbs for the suffering of Ukrainians but realized that many still bore the scars of past trauma that obliterated all feeling for the pain of others.

“Individuals who suffer traumas that they have never dealt with cannot feel empathy,” she said. Societies, like trauma-scarred individuals, she added, “just repeat the same stories of their own suffering over and over again,” a broken record that “deletes all responsibility” for what they have done to others.

A sense of victimhood runs deep in Serbia, viewing crimes committed by ethnic kin during the Balkan wars of the 1990s as a defensive response to suffering visited on Serbs, just as Mr. Putin presents his bloody invasion of Ukraine as a righteous effort to protect persecuted ethnic Russians who belong in “Russky mir,” or the “Russian world.”

“Putin’s ‘Russian world’ is an exact copy of and what our nationalists call Greater Serbia,” said Bosko Jaksic, a pro-Western newspaper columnist. Both, he added, feed on partially remembered histories of past injustice and erased memories of their own sins.

The victim narrative is so strong among some in Serbia that Informer, a raucous tabloid newspaper that often reflects the thinking of Mr. Vucic, the president, last month reported Russia’s preparations for its invasion of Ukraine with a front-page headline recasting Moscow as a blameless innocent: “Ukraine attacks Russia!” it screamed.

The Serbian government, wary of burning bridges with the West but sensitive to widespread public sympathy for Russia as a fellow wronged victim, has since pushed news outlets to take a more neutral stand, said Zoran Gavrilovic, the executive director of Birodi, an independent media monitoring group in Serbia. Russia is almost never criticized, he said, but abuse of Ukraine has subsided.

Mr. Aleksandrovych, the Ukrainian ambassador to Serbia, said he welcomed the change of tone but that he still struggled to get Serbians to look beyond their own suffering at NATO’s hands in 1999. “Because of the trauma of what happened 23 years ago, whatever bad happens in the world is seen as America’s fault, ”he said.

Hungary, allied with the losing side in two world wars, also nurses an oversize victim complex, rooted in the loss of large chunks of its territory. Mr. Orban has stoked those resentments eagerly for years, often siding with Russia over Ukraine, which controls a slice of former Hungarian land and has featured prominently in his efforts to present himself as a defender of ethnic Hungarians living beyond the country’s border.

In neighboring Serbia, Mr. Vucic, anxious to avoid alienating pro-Russia voters ahead of Sunday’s election, has balked at imposing sanctions on Russia and at suspending flights between Belgrade and Moscow. But Serbia did vote in favor of a United Nations resolution on March 2 condemning Russia’s invasion.

That was enough to win praise for Mr. Vucic from Victoria Nuland, an American under secretary of state, who thanked Serbia “For its support for Ukraine.” But it did not stop Russia’s foreign minister, Sergey V. Lavrov, from on Monday suggesting Belgrade as a good place to hold peace talks between Moscow and Kyiv.

Energy concerns. Germany activated the first step of an emergency plan that could lead to the rationing of natural gas within the country. The move comes amid growing concerns that Russia could cut off deliveries unless payments on existing contracts were made in rubles.

Serbs who want their country to join the European Union and stop dancing between East and West accuse Mr. Vucic of playing a double game. “There are tectonic changes taking place and we are trying to sleep through them,” said Vladimir Medjak, vice president of European Movement Serbia, a lobbying group pushing for EU membership.

Serbia, he said, is “not as much pro-Russian as NATO-hating.”

Instead of moving toward Europe, he added: “We are still talking about what happened in the 1990s. It is an endless loop. We are stuck talking about the same things over and over. ”

More than two decades after the fighting ended in the Balkans, many Serbs still dismiss war crimes in Srebrenica, where Serb soldiers massacred more than 8,000 Bosnian Muslims in 1995, and in Kosovo, where brutal Serb persecution of ethnic Albanians prompted NATO’s 1999 bombing campaign, as the flip side of suffering inflicted on ethnic Serbs.

Asked whether she approved of the war unleashed by Mr. Putin as she walked by the Belgrade mural in his honor, Milica Zuric, a 25-year-old bank worker, responded by asking why Western media focused on Ukraine’s agonies when “you had no interest in Serbian pain” caused by NATO warplanes in 1999 “Nobody cried over what happened to us,” she said.

With much of the world’s media focused last week on Russia’s destruction of Mariupol, the Ukrainian port city, Serbia commemorated the start of NATO’s bombing campaign. Front pages were plastered with photos of buildings and railway lines destroyed by NATO. “We can not forget. We know what it is to live under bombardment, ”read the headline of Kurir, a pro-government tabloid.

A small group of protesters gathered outside the United States Embassy and then joined a much bigger pro-Russia demonstration, with protesters waving Russian flags and banners adorned with the letter Z, which has become an emblem of support for Russia’s invasion.

Damnjan Knezevic, the leader of the People’s Patrol, a far-right group that organized the gathering, said he felt solidarity with Russia because it had been portrayed as an aggressor in the West, just as Serbia was in the 1990s, when, he believes, “Serbia was in fact the biggest victim.” Russia had a duty to protect ethnic kin in Ukraine just as Serbia did in Bosnia, Croatia and Kosovo, Mr. Knezevic said.

Bosko Obradovic, the leader of Dveri, a conservative party, said he lamented civilian casualties in Ukraine but insisted that “NATO has a huge responsibility” for their fate.

Predrag Markovic, director of the Institute of Contemporary History in Belgrade, said that history served as the bedrock of nationhood but, distorted by political agendas, “always offers the wrong lessons.” The only case of a country in Europe fully acknowledging its past crimes, he added, was Germany after World War II.

“Everyone else has a story of victimization.” Mr. Markovic said.