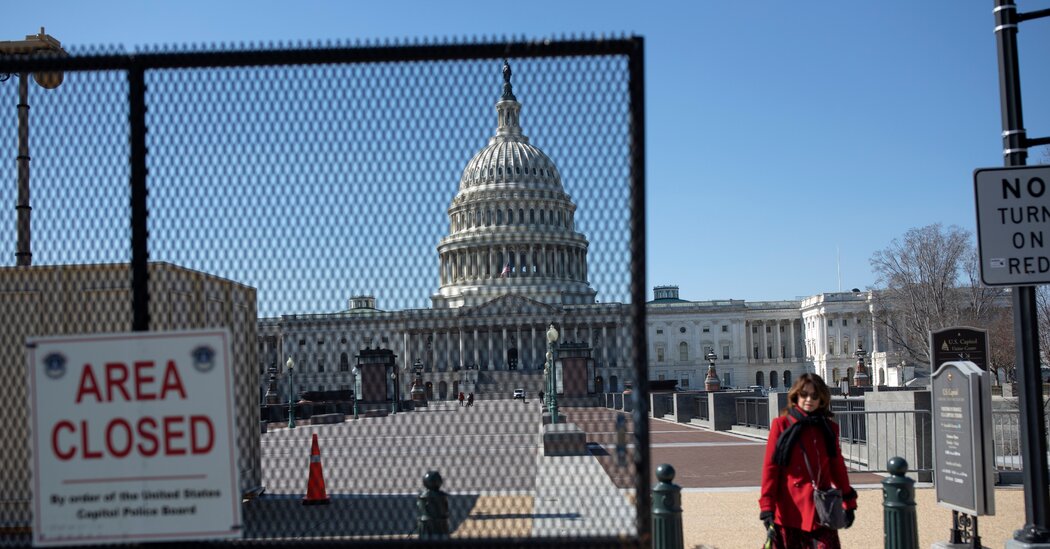 WASHINGTON – Officials have ramped up security around the Capitol to levels not seen in months before President Biden’s State of the Union address set for Tuesday, as lawmakers brace for planned convoys of protesting truck drivers descending on Washington.

With the pro-Trump mob violence of a year ago still fresh in many minds and lawmakers facing a surge in threats, officials erected a perimeter fence around the Capitol, dispatched National Guard troops and positioned military vehicles and police cars at strategic locations on streets near Congress. The US Capitol Police said they would close 18 different stretches of Washington roads to motorists.

“We are prepared to take swift law enforcement actions for violations of our local and federal laws if necessary,” Robert J. Contee III, the chief of Washington’s Metropolitan Police Department, said at a Monday news conference where he was flanked by Mayor Muriel Bowser and federal law enforcement officials. He pledged increased staffing and “enhanced” security around the city.

The security fence was erected in January of last year after a mob of former President Donald J. Trump’s supporters stormed the Capitol, but was removed in July, reopening public accessibility to the complex. It was briefly restored in September in preparation for a right-wing rally in support of those arrested in connection with the Jan. 6 attack.

A convoy of truck drivers headed to Washington to protest vaccine mandates has raised alarms once again.

A Department of Homeland Security intelligence bulletin, obtained by The New York Times, said the caravans would “likely present public safety challenges for first responders if the convoys are of substantial size” and warned that some domestic extremists “probably will be drawn to the event and could engage in premeditated or opportunistic violence. ”

At the news conference on Tuesday, Sean Gallagher, the acting assistant chief of the Capitol Police, said the perimeter fence was temporary and had been put up out of an “abundance of caution.” He suggested that it would be removed soon after Mr. Biden’s speech should not materialize security issues.

The State of the Union always draws intense security, given that it puts the members of all three branches of government – the president and his cabinet, members of the House and Senate and the justices of the Supreme Court – together in the same room. But security officials said they were on especially high alert this year.

Despite warnings from an organizer that “tens of thousands” of truck drivers would converge on the nation’s Capitol, it was unclear whether the convoys of truck drivers protesting Covid-19 mandates would, in fact, materialize or when they might arrive, officials said.

“Sometimes you do not know what you do not know,” Chief Contee said of when the protesters might arrive, adding: “While we expect the best, we always plan for the worst. So we have resources that are deployed – very much coordinating with all of our federal partners here – to make sure we have a safe State of the Union and peaceful First Amendment assembly whatever day it shows up. ”

The first trial. Guy Wesley Reffitt, who is accused of obstructing the work of Congress on Jan. 6, is set to become the first defendant to stand trial in a case stemming from the Capitol riot. The trial, which opens on Feb. 28, will set the tone for dozens of other cases.

The National Guard, which sent thousands of soldiers to the Capitol last year after Jan. 6 until May, once again deployed troops to the city in recent days.

The Defense Department authorized about 400 unarmed members of the District of Columbia National Guard and 50 large tactical vehicles to be placed at designated traffic posts on a 24-hour basis before Mr. Biden’s speech. The department also authorized up to 300 National Guard members from outside Washington to assist at designated traffic posts and select Capitol entry points. Philadelphia police have also supplied officers to help with security.

Despite the increased security, the House chamber will offer a more normal backdrop for Mr. Biden than last year’s speech, which was given under intense pandemic restrictions. Citing a drop in coronavirus cases across Washington, Dr. Brian P. Monahan, the attending physician at the Capitol, said masks would no longer be required in the House, making the practice optional regardless of vaccination status for the first time in more than a year.

There are still some limitations: There will be virtual guests rather than in-person, because the House gallery overlooking the floor will be used to seat lawmakers and keep them socially distanced, according to a memo issued by William J. Walker, the House sergeant -at-arms, and there will be coronavirus health screenings. Lawmakers, staff and reporters will also need to show proof of a negative coronavirus test taken a day before the event.

And instead of transforming Statuary Hall into a frenzy of lights and cameras ready to catch reactions to the speech, those cameras will be set up across office buildings and elsewhere in the Capitol to catch lawmakers eager to weigh in on the president’s remarks.