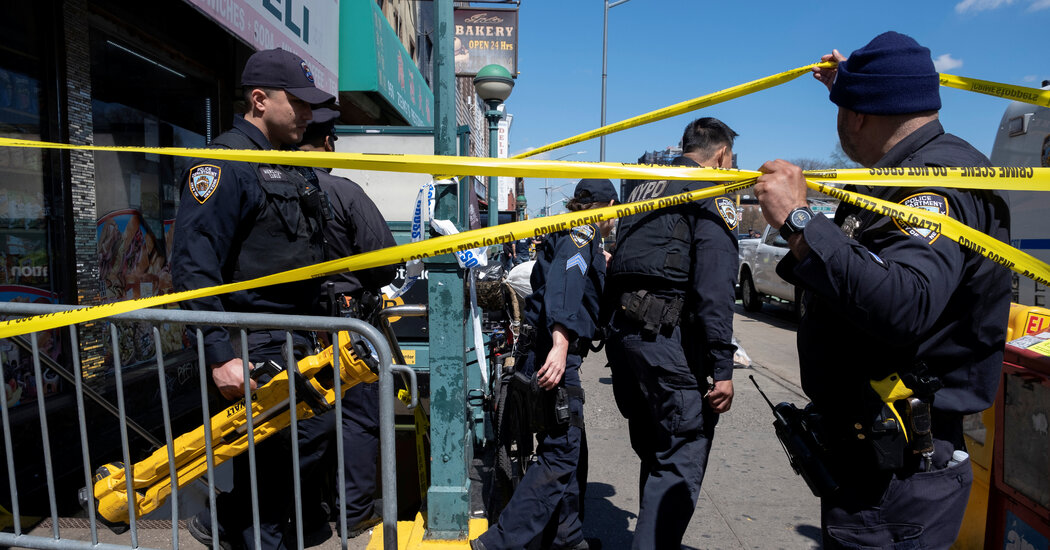 Frank R. James was held without bail on Thursday after prosecutors said he posed a continued threat in the wake of a violent and premeditated attack on New York’s subway. His lawyers, who said their client had called a tip line to surrender, asked a federal judge to ensure Mr. James received psychiatric care in jail.

Mr. James’s brief initial court appearance marked a new stage in a case that shocked a city already on edge about subway crime. At once, the attack turned a morning train ride into a scene of chaos, injuring at least 30 people, according to prosecutors. It was the bloodiest crime in New York’s public transit system in nearly four decades, and came as many residents were wading cautiously back into the routines of prepandemic life.

To some, the shooting underscored challenges facing Mayor Eric Adams, who has said that high-profile crimes have elevated public anxiety over safety to some of their highest levels in recent years – and that addressing those fears is essential to the city’s recovery. On Thursday, prosecutors said that the attack inflicted significant damage and disruption and that it could have ended in a massacre.

They described each methodical step they say Mr. James, 62, took: from setting off a smoke bomb on a crowded subway car to unleashing a barrage of bullets and stripping off a disguise as he made his escape.

“The defendant terrifyingly opened fire on passengers on a crowded subway train, interrupting their morning commute in a way this city has not seen in more than 20 years,” Sara K. Winik, an assistant U.S. attorney, said in court. “The defendant’s attack was premeditated; it was carefully planned; and it caused terror among the victims and our entire city. ”

Mr. James, who is charged with carrying out a terrorist attack on a mass transit system and faces up to life in prison if convicted, said little on Thursday, often responding to the federal judge’s questions with a hushed “Yes.” Because it was only his initial appearance, and he has not been indicted, Mr. James has not yet entered a plea.

Outside the courthouse on Thursday, Mia Eisner-Grynberg, one of his court-appointed lawyers, said that her client deserved a fair trial, warning that “initial reports” from the police and news outlets “can be inaccurate.”

“We are all still learning about what happened on that train, and we caution against a rush to judgment,” she said. “What we do know is this: Yesterday, Mr. James saw his photograph on the news. He called Crime Stoppers to help. He told them where he was. ”

The court appearance came as local and state officials have been attempting to reassure riders that transit systems remain safe, emphasizing that city life remains far less dangerous than it was decades ago and encouraging New Yorkers to continue taking the trains.

Subway ridership, still below 60 percent of its prepandemic averages most of last month, fell in the attack’s immediate aftermath. But Wednesday’s preliminary data offered a hopeful sign: The numbers were up by about 75,000 customers over Tuesday – for about 3.1 million total. They still remained under last week’s figures by about 159,000, a possible indication of lingering concerns.

Still, it can be challenging to identify a single cause of fluctuating ridership, and the lower figures came on a day with pleasant weather, when fewer people want to travel underground.

“We’re starting to see ridership come back,” Janno Lieber, the chairman of the Metropolitan Transportation Authority, said at a news conference on Thursday. “Even after the incredibly disturbing news that we all saw this week.”

While the broad details of Tuesday morning’s attack have been well-established, prosecutors have not described a potential motive for the violence. It remained unclear why a train line that cuts through immigrant-heavy neighborhoods in Brooklyn, like Sunset Park, a home to many people from Asian and Latin American countries, became the target of a brutal shooting.

But federal prosecutors wrote in their court filing Thursday that while Mr. James’s lengthy arrest record – nearly a dozen low-level offenses, including reckless endangerment, larceny and trespassing – might seem “unremarkable,” it paints “a picture of a person with a penchant for defying authority and who is unable or unwilling to conform to his conduct to law. ”

On the train, as it neared the 36th Street station in Sunset Park, he fired “approximately 33 rounds in cold blood at terrified passengers who had nowhere to run and nowhere to hide,” federal prosecutors wrote.

Details about Mr. James’s lives were still being pieced together: He had worked at Amazon for six months before his role ended about a year ago, according to a company spokeswoman, who declined to detail how or why.

Law enforcement agencies are scrutinizing hours of clues to his state of mind that he offered in disturbing videos posted for months on a YouTube channel and other social media accounts.

The videos depicted a troubled recluse, often frustrated by issues of race, current events and global affairs, matters on which he often delivered extended tirades. They also revealed a man who could sometimes become fascinated by violent ideas, once offering viewers instructions for making a Molotov cocktail, according to federal prosecutors.

He mused at least once about mayhem in New York’s subway system. Other times, he questioned whether Mr. Adams could prevent lawbreaking there. “He can not stop no crime in no subways,” Mr. James said. “He may slow it down, but he ain’t stopping it.”

Federal prosecutors asked Thursday that Mr. James be detained until his trial, arguing that his “mere presence outside federal custody presents a serious risk of danger to the community.”

After the shooting, the police discovered ammunition and other weapons in a storage unit and apartment rented by Mr. James, prosecutors noted. The authorities also recovered an array of belongings from the train, including a Glock 9-millimeter handgun, three ammunition magazines and a credit card with Mr. James’s name on it.

Among the collection was a key to a U-Haul van that he had rented, which investigators later found about five miles from the station with a propane tank inside, prosecutors said.

Mr. James was eventually captured by the authorities on Wednesday afternoon, near a McDonald’s in the East Village, about 29 hours into an expansive manhunt that featured several federal and state agencies and hundreds of officers.

On Thursday, Mr. James’s lawyers said they did not object to his detention, but asked the magistrate judge to ensure that he received a psychiatric evaluation and other medical care at Brooklyn’s Metropolitan Detention Center, where he is being held, about seven blocks from the train station in Sunset Park where the attack took place.