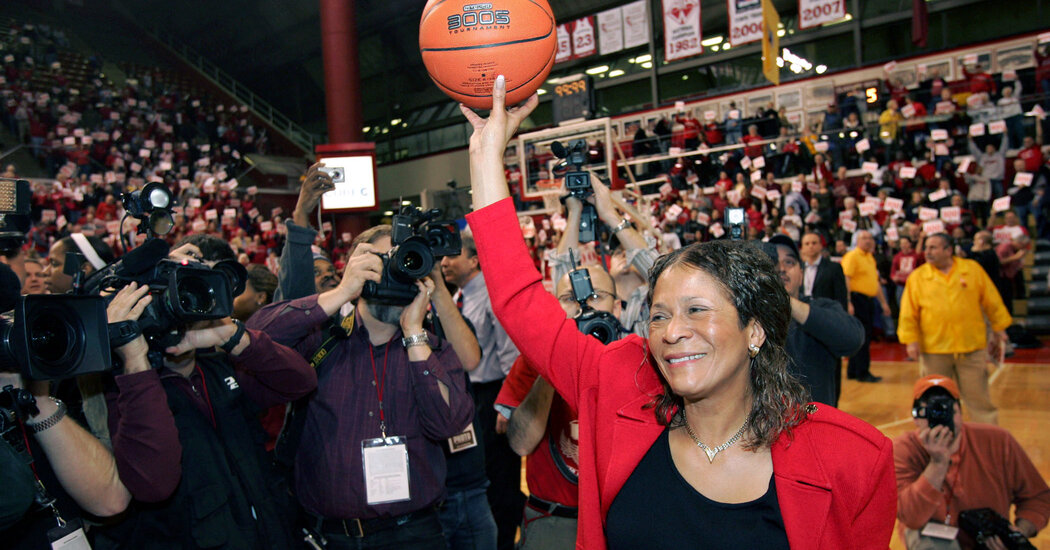 C. Vivian Stringer, the Hall of Fame women’s basketball coach at Rutgers University who first commanded a college sideline in 1971 and became one of her sport’s premier defensive minds, said Saturday that she would retire in September.

The first Black coach to win at least 1,000 Division I basketball games, Stringer, 74, has long been among the celebrated and idolized figures in college sports. In recent years, though, she has sometimes been at a remove from the Rutgers program she built into a mainstay of women’s basketball over more than a quarter-century in charge in Piscataway, NJ She did not coach last season, and she missed some games near the end of the 2018-19 season because of exhaustion.

“After recently celebrating the first women’s Final Four team at Cheyney State University, where it all started, it sat with me that I have been at this for a long time,” Stringer said in a statement. “It is important to step aside and challenge others to step up and take this game forward.”

Stringer won 535 games at Rutgers, where she became the coach in 1995 and relied on a punishing “55” defense that used all five players in full-court pressure. Her Rutgers run included two Final Four appearances from 17 NCAA tournament berths.

She also guided Cheyney State, a historically Black university near Philadelphia, to the 1982 title game – the first in NCAA history for women’s basketball – and the University of Iowa to the 1993 Final Four. At Iowa, where she inherited a program in 1983 that had won just seven games in the previous season, she turned the Hawkeyes into a model of consistency and power in the Big Ten Conference.

An NCAA championship was ultimately elusive, but Stringer will retire with 1,055 career victories, the fifth most in Division I women’s college basketball, and a spot in the Naismith Memorial Basketball Hall of Fame, to which she was inducted in 2009. Dozens of Stringer’s players went on to play in the WNBA and in professional leagues abroad, including Kahleah Copper, Arella Guirantes, Cappie Pondexter and Erica Wheeler.

Rutgers announced in April 2021 that it had reached a $ 5.5 million contract extension with Stringer, who was then expected to remain with the Scarlet Knights until the end of the 2025-26 season. But she never coached another game, fueling frustrations and speculation around women’s basketball about the program’s future.

Even as Rutgers was announcing the start of a coaching search on Saturday, university officials were eager to pay tribute to Stringer, who was just the second full-time women’s basketball coach in school history. The university said it would name its home basketball court for Stringer, who will also receive $ 872,988 in connection with a retirement agreement.

“My life has been defined by coaching and I’ve been on this journey for over five decades,” Stringer said. “It’s rare that someone gets to do what they love for this long and I have been fortunate to do that.”