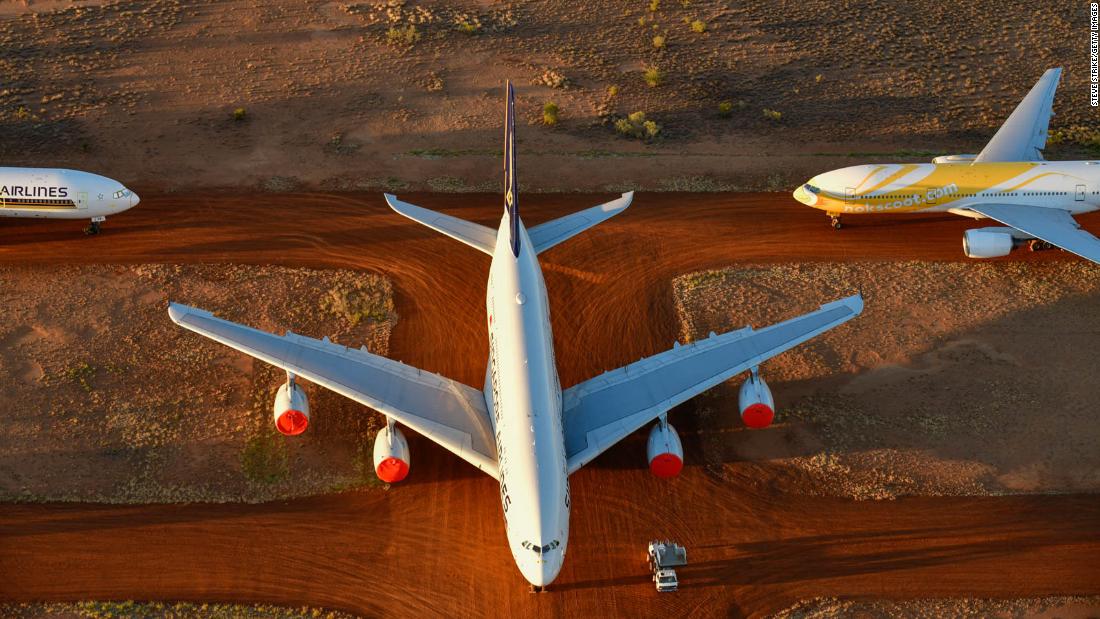 (CNN) – If the pandemic has meant you’ve nearly forgotten what the inside of a plane looks like, you’re not alone. Covid has grounded commercial airline fleets all over the world, setting up a difficult path to recovery for the aviation industry.

Omicron has slowed down that comeback, and a full return to pre-pandemic air traffic levels may take between one and two and a half years, depending on various estimates. However, international travel is picking up, borders are reopening and more and more planes have gone back into service.

Many airline and airport workers have been laid off or furloughed in the past couple of years, and for some that has meant coming back to work after a forced break – an especially delicate proposition for pilots. Could long periods away from the cockpit affect a pilot’s confidence or performance?

In a report about an incident that occurred in September 2021 at Aberdeen Airport in Scotland, the UK’s Air Accidents Investigation Branch (AAIB) suggests it’s possible.
A Boeing 737 on approach to the airport was told to perform a “go around” – an aborted landing during which a plane climbs back up, circles around and tries again. It can happen for a number of reasons, such as bad weather or obstacles on the runway.

The aircraft should have climbed to 3,000 feet before flying in a circle to approach the runway again, but instead it “deviated significantly from the expected flight path,” the report says, descending rapidly and with an “undesirable” increase in airspeed that wasn ‘ t corrected soon enough. It took about a minute for the pilots to fix the mistake, before landing safely.

The report notes that the crew had not always flown regularly in the previous 18 months, although flight simulators had been used to help maintain skills. “The real-world environment,” it reads, “creates different demands on crews, and it is possible that this event illustrates that lack of recent exposure to the real-world environment can erode crews’ capacity to deal effectively with those challenges.”

The report also states that “the safety benefits of simulator training are well established” and underlines that a link has not been established “between this event and a lack of line flying,” but said that it is “clearly one possibility.”

Although the report only suggests a connection between the event and a lack of flying, Paul Dickens, a psychologist at Core Aviation Psychology, which provides psychological services to airlines, believes that’s mostly to edge on the diplomatic side: “Certainly it would seem to me that this and a number of other incidents that happened earlier in the pandemic were pretty much directly linked to a lack of real-life, hands-on flying practice.”
In July 2020, the International Air Transport Association (IATA) released a notice to inform the aviation industry of an increasing number of “unstable approaches,” or landing attempts in which the speed, direction or descent rate of the aircraft were incorrect. They had more than doubled compared to pre-pandemic levels.
In a leaked memo obtained by the Australian press, national carrier Qantas detailed errors made by its pilots after long periods of inactivity due to Covid, such as starting a takeoff with the brakes still on.
Similar reports have surfaced from all over the world, many through NASA’s Aviation Safety Reporting System, a platform where industry professionals can log incidents anonymously, for the wider community to discuss. A CNN analysis of the platform has found several Covid-related mistakes, one of which involved a plane landing without having obtained permission to do so. “Since Covid-19 breakout, I was not flying as frequently as before,” wrote one of the pilots from that flight. “I believe this was factored into this incident.”
Commercial pilots are blaming unprecedented downtime amid the coronavirus pandemic for in-flight mistakes made with passengers on board. CNN’s Pete Mutean reports.

According to Dickens, anybody who has not been practicing their skills in the real world is going to have some level of skill degradation, but that’s not specific to pilots and occurs in any profession: “It happens to anybody who has a time off work , even more so during the pandemic, when that time off was such an unusual time. “

Usually, pilots need to log a set number of takeoffs and landings every 90 days and pass a semi-annual training evaluation in order to keep their “currency” – a term used in the aviation industry to indicate the recentness of experience.

Patrick Smith, an airline pilot flying Boeing 767s and the author of the popular book and blog “Ask the Pilot,” agrees that a lack of currency, in any profession, can affect performance and level of preparation. However, he stops short of calling it a safety concern.

“I think this is a fair discussion, but maybe not to the extent that people are led to believe,” he says. “A certain amount of rustiness is going to remain, there’s simply no way around that. Does that translate to a flight being unsafe? No.”

When pilots drop out of currency, they need to go through training again, usually in a simulator, as well as physical and psychological evaluations, although there’s no universal rule for when and how this happens: “It varies by airline and country,” says Dickens. “In the EU [where I work] all pilots must go through psychological assessment prior to commencing line operations and I’m seeing a lot of pilots getting back into flying who have often been doing other things for as much as two years now. “

But what happens to a pilot that hasn’t flown in so long? “They may lose situational awareness, which is the knowledge of where you are in the air, being able to visualize yourself in the cockpit space, and also in air space. They may also suffer in decision-making and problem-solving, due to being out of the loop of making decisions along the lines they normally make during operational time, “says Dickens.

The European Union Aviation Safety Agency (EASA), in a safety report released last year, raises a similar concern: “With little or no contact with flying duties for a prolonged period of time, flight crew are likely to experience a high cognitive task demand when they do return to the cockpit. In the context of a highly prescriptive and procedure-heavy working environment, the risk of slips, lapses and errors can be significant. ”

The report also states that “decay of proficiency can create a direct safety risk, as accuracy, speed and ultimately effectiveness of task performance deteriorates with the lack of practice.”

A picture taken on December 9, 2011 in Paris shows the controls of a flight simulator in a reproduction of a Boeing 737 cockpit.

Whether or not a pilot feels fully competent upon returning to work after a break might also have to do with factors that are unique to each individual, such as how long they’ve been flying, on which aircraft, as well as their general mental and physical well-being.

“I’ve worked pretty consistently through the pandemic, but I did have stretches where I went several weeks without flying,” says Smith, who has been a pilot for more than 30 years. “Never did I feel that I could not meet whatever would be demanded of me.”

So how can pilots get back in the loop properly? “A simulator is by far the best tool,” says Smith, “and for the most part, that’s what air carriers have been doing when pilots have fallen out of currency or have been grounded for extended periods of time.”

However, the availability of simulators was also affected by the pandemic, due to travel restrictions – with pilots unable to reach the location of the simulator itself – or social distancing restrictions.

“Access to these simulators is and will probably remain a problem in the future due to the prevailing health measures, which limits the number of available slots worldwide,” says the EASA report. To mitigate the issue, EASA has started approving alternative technologies such as Virtual Reality (VR), which is easier to deploy than traditional simulators, which are full-scale replicas of actual cockpits.

Other ways to minimize risk for returning crews is to pair a pilot who has not worked in a while with another who has recent flying experience, and avoiding challenging airports – for example, with difficult landings or short runways.

IATA has released multiple documents that contain guidance for flight crew returning to work, and EASA has started a campaign called “Be Ready – Stay Safe” which includes specific advice for pilots. Examples include conducting mental rehearsals, paying more attention to the aircraft and the flight path than one was used to, and reviewing SOPs – Standard Operating Procedures, a step-by-step guide for carrying out operations safely – before reporting for duty.

Once back at the controls during an actual flight, pilots have another way to regain familiarity with the aircraft more quickly: by relying less on automation and flying the plane manually, for example during the approach to the airport.

“That’s a way of ensuring that their skills are being put to use, rather than switching on the auto mode and just letting the plane go by itself, because they’re not going to gain anything from that. The physical action brings back the skills a bit more quickly, “says Dickens.

While this is a complex issue with multiple factors at play, should it be on your mind when boarding your next plane?

“It depends on the airline,” says Dickens. “I’m sure there are one or two that have been less rigorous about this process, but to be honest with you, most scheduled airlines know that this is an important issue – and have taken it very seriously.”

Top image: Grounded airplanes are seen at the Asia Pacific Aircraft Storage facility on May 15, 2020 in Alice Springs, Australia.