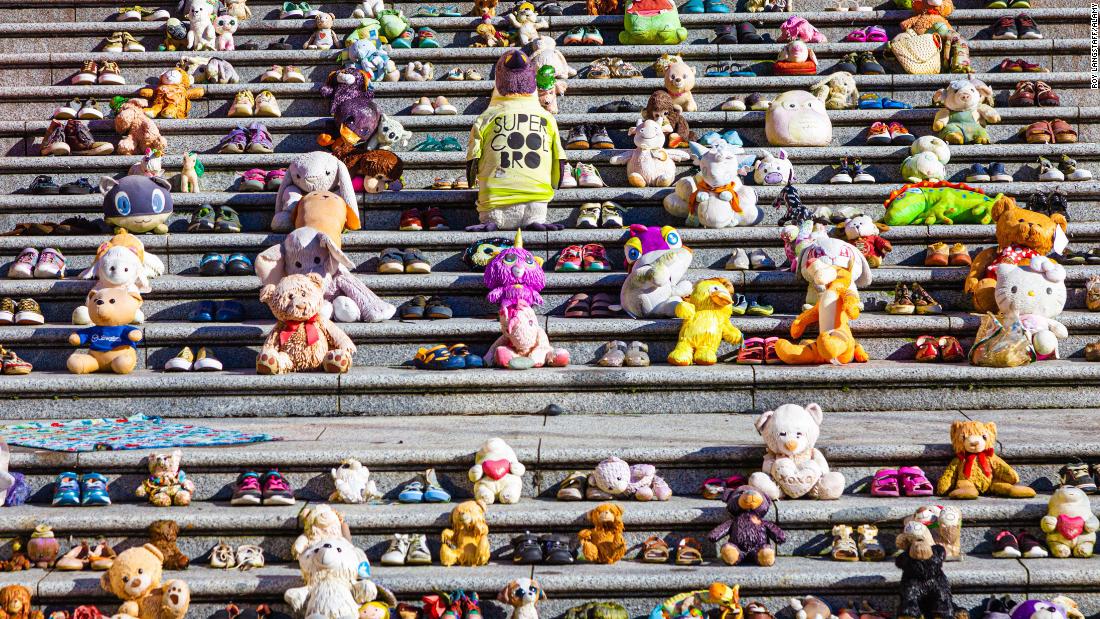 The Kapawe’no First Nation, which is located over 200 miles northwest of Edmonton, said the discovery was made at the former St. Bernard Mission School at the Grouard Mission site. The potential graves were identified using ground-penetrating radar (GPR) and drone imagery, officials said.

The residential school was one of several in Canada that thousands of mostly Indigenous children were forced to attend after being separated from their families between the 19th century and the 1990s. At least 150,000 Indigenous children from across the country were affected by the practice, Canadian Prime Minister Justin Trudeau has said.

“We remember the devastation our people felt when our children were forcibly removed from their families, communities to be placed in Indian residential schools,” Kapawe’no Chief Sydney Halcrow said during a news conference Tuesday. “We can start our journey of healing our identities that they fought so hard to take from us.”

Halcrow said information from survivors, community members and archival records indicates several children died during their time at school. The Catholic Church opened St. Bernard Mission School in 1894 and it closed in 1961, according to Canada’s National Center for Truth and Reconciliation.

The investigation to find unmarked graves of children who reportedly died at the school began in October 2021 through a joint effort from the Kapawe’no First Nation and the Institute of Prairie and Indigenous Archeology (IPIA) at the University of Alberta.

“One hundred sixty-nine potential graves were identified based on analysis on anomalies within the GPR data that had characteristics associated with unmarked graves,” IPIA Director Kisha Supernant said.

The investigation is expected to continue in two additional phases, Supernant said.

An Indian Residential School Crisis Line is available 24/7 for former students and others affected at 1-866-925-4419.

Hundreds of unmarked graves identified at other schools

The painful discovery of the potential unmarked graves comes after hundreds of Indigenous children remains were found at several sites last year amid a reckoning of how Canada had treated First Nations communities.

Estimates indicate more than 4,000 children died while in residential schools over a period of several decades, Canada’s Truth and Reconciliation Commission wrote in a 2015 report on the legacy of the residential school system. It detailed decades of physical, sexual and emotional abuse suffered by children in government and church-run institutions.

“These residential schools were created for the purpose of separating Aboriginal children from their families, in order to minimize and weaken family ties and cultural linkages, and to indoctrinate children into a new culture – the culture of the legally dominant Euro-Christian Canadian society , “the report said.

In May 2021, the Tk’emlúps te Secwépemc community confirmed remains of 215 children who attended the Kamloops Indian Residential School were found. A month later, the Cowessess First Nation in Saskatchewan announced the discovery of at least 750 unmarked graves on the grounds of the former Marieval Indian Residential School.
In British Columbia, 182 human remains in unmarked graves were found in July 2021 at the site of the former St. Eugene’s Mission School near the city of Cranbrook, the Lower Kootenay Band, a member band of the Ktunaxa Nation, said.

Last year, the Canadian Conference of Catholic Bishops apologized for its role in the residential school system and expressed “profound remorse.”

“We acknowledge the grave abuses that were committed by some members of our Catholic community; physical, psychological, emotional, spiritual, cultural, and sexual,” the organization said in a statement. “We also sorrowfully acknowledge the historical and ongoing trauma and the legacy of suffering and challenges faced by Indigenous Peoples that continue to this day.”