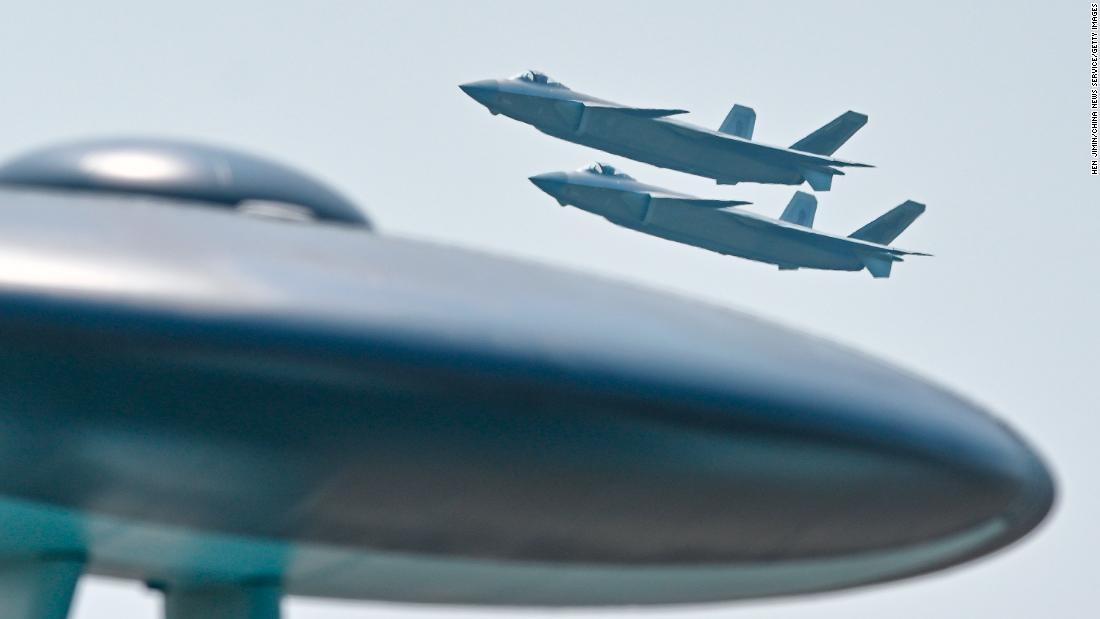 Early versions of the J-20 stealth jet used Russian engines – but those have since been replaced with domestically-produced twin engines. The jets were first shown to the public with the new Chinese engines last year at Airshow China.

Ren Yukun, a spokesperson for the J-20’s state-run manufacturer, added that it was a “training routine” for the J-20 to begin conducting patrols now that it is equipped with Chinese engines, according to Global Times.

The announcement comes just weeks after United States Gen. Kenneth Wilsbach, the commander of US Pacific Air Forces, said US F-35s and Chinese J-20s came into close proximity with each other over the East China Sea.

The East China Sea and South China Sea have both long been contested regions, with overlapping territorial claims by numerous countries.

China claims almost all of the vast South China Sea as its sovereign territory. It has been building up and militarizing its facilities there, turning islands into military bases and airstrips, and allegedly creating a maritime militia that could number in the hundreds of boats.

Meanwhile in the East China Sea, China claims sovereignty over the Japanese-controlled Senkaku Islands, also known as the Diaoyu Islands. In recent years, the US has reiterated its promise to defend the Japanese islands in the event of foreign aggression.

Experts say the deployment of the J-20s shows two things: China’s increased confidence in its military capabilities, and its warning to other countries with a stake in the territorial dispute.

With some 200 J-20s reportedly in service, the People’s Liberation Army Air Force (PLAAF) “now has in regular service a fleet of advanced stealth fighters as good as the Americans, who remain the benchmark,” said Peter Layton, a visiting fellow at the Griffith Asia Institute in Australia. He added that China’s message to the world is: “Any foreign military aircraft intruding into China’s claimed airspace in the East and South China Sea may now be intercepted by J-20s.”

While such a move would be politically fraught, the J-20’s wide radius of action means it could patrol further out to sea, or stay longer in areas like the East China Sea, Layton said.

Small formations, such as a handful of jets, could also conduct occasional deep patrols into the South China Sea, land to refuel at one of China’s island airbases, then return to the mainland. The PLAAF could even launch missions to overfly any US carrier battle groups that enter the South China Sea.

The transition from Russian to Chinese engines also shows China’s growing independence in military manufacturing, Layton said. “It’s not just that China does not need Russian help anymore, it is that Chinese-built aircraft are now superior to Russia.”

The fact that the J-20s now have more reliable twin engines than the Russian ones makes these patrols “a much more plausible option,” which could be why they hadn’t been sent on patrol before, Layton said.

The J-20 has long been touted as China’s answer to the American F-22 – considered the world’s premier stealth fighter jet – and the F-35.

A 2017 report by the China Power Project at the Center for Strategic and International Studies said the new Chinese engines would give the J-20 low supercruise ability, meaning they could fly at supersonic speeds for extended periods.

US officials have long said the J-20 can not stack up to US stealth fighters – but Wilsbach, the US Pacific Air Forces commander, said last month that the J-20s made a strong impression when they encountered US F-35s over the East China Sea.

“We’re relatively impressed with the command and control that was associated with the J-20s,” Wilsbach said at a Mitchell Institute for Aerospace Studies conference.

The US observed “relatively professional flying” by the Chinese aviators, he said, but noted the US was unsure how China would employ the J-20s, whether in multi-mission roles like the F-35 or in an air superiority role like the F-22.

Layton said the US, Japan and other countries will be “keenly collecting electronic intelligence data” on any J-20s out on coastal patrols, hoping to gather more information on its stealth characteristics, as well as any radio and datalink transmissions.