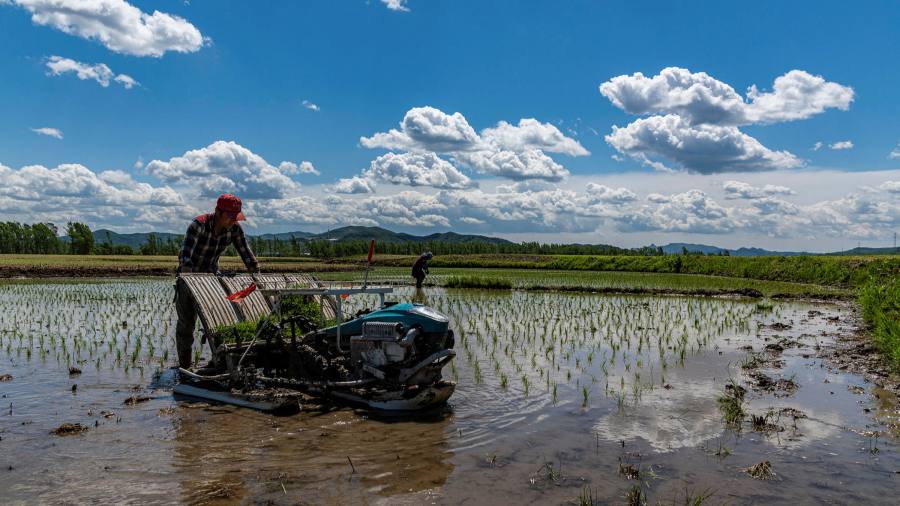 China’s strict Covid lockdowns are exacerbating serious shortages of fertilizer, labor and seeds, just as many of the country’s biggest agricultural provinces prepare for their crucial spring planting season.

According to official data, as many as a third of farmers in northeastern Jilin, Liaoning and Heilongjiang provinces have insufficient agricultural inputs after authorities sealed off villages to fight the pandemic. The three provinces account for more than 20 per cent of China’s grain production.

A drop in output of Chinese spring-planted grains, such as rice or corn, could undermine Beijing’s decades-long effort to achieve self-sufficiency in staple foods, forcing it to increase imports and potentially adding to global food price inflation.

While national and global attention has been focused on Shanghai’s lockdown of its entire population over the past week, Jilin province has been battling an outbreak with even stricter measures for most of the past month.

According to the Jilin provincial government, about one-third of farmers did not have enough fertilizer at the end of March – only about three weeks before they were supposed to start planting.

Farmers and factory managers have blamed the disruption on China’s uncompromising zero-covid policy, under which authorities have adopted tough controls ranging from traffic bans to local business shutdowns.

“We have to adjust the zero-covid policy for farming,” said the adviser, who asked not to be named. “We should not prioritize virus control over everything else. This can not carry on forever. ”

The municipal government of Jilin city, located within Jilin province, said preparations for the spring planting season were proving to be very difficult. “We are behind [schedule] in making fertilizer available to every farmer, ”it said in a statement posted on its website.

Li Qinghua, a 38-year-old farmer who grows rice on 60 acres of land in Jilin city, said his fertilizer inventory was more than 80 percent below normal levels after delivery was delayed. “I will miss the best time window to plant seeds if my order does not arrive next week,” said Li.

China’s agriculture ministry did not immediately respond to a request for comment made on Tuesday, a public holiday.

According to estimates by analysts at Nomura, at least 23 Chinese cities with a combined population of more than 190mn people were currently enforcing full or partial lockdowns. “Unlike in spring 2020, when there was a general belief that Covid-19 would end in the summer, we currently see no end in sight,” the analysts wrote.

Fertilizer factories are struggling. An executive at Genliduo, a leading fertilizer producer in Hebei province, said his firm was having “lots of difficulty” shipping to customers and securing raw materials. The executive added that the problem was industry-wide and many smaller producers had suspended operations.

In Jilin province, which has reported more than 50,000 Covid-19 cases since March, many townships refuse to let in trucks from other regions, even if they are bringing seeds and fertilizers that are not available locally.

Compounding farmers’ frustrations, many migrant workers are stuck in lockdowns in cities and unable to return to rural areas for planting. Those who do make it to the farms are also required to spend 14 days in quarantine before they can start working in the fields.

“This is one of the most challenging planting seasons I have ever encountered,” said Li Zhizhong, who farms 80 acres of land in Lishu county in Jilin province. “I have rarely had so much trouble buying raw materials and recruiting workers.”

The Jilin city government said on Sunday it was authorizing “green channels” that would allow local drivers to transport seeds and fertilizers to other areas. But it also said outbound truck drivers would not be allowed to return to the city after making their deliveries.

It added that the measures were designed to “reduce as much as possible the impact of the pandemic on spring planting”.

“I am not going to [risk] being separated from my family in order to ship fertilizer, ”said Gao Fucai, a driver from Jilin city. He added that he feared being forced to “live in the truck” if not allowed back home.

Linyi, a farming city in Shandong province, stopped admitting trucks from other cities after a local driver tested positive following a trip to Shanghai. At the time, Linyi had only 58 confirmed infections.

A fertilizer shortage ensued and has not yet been resolved. “We and the government have different priorities,” said Wang Tao, a fertilizer distributor in Linyi. “They only care about eliminating the virus, while we have a life to live.”