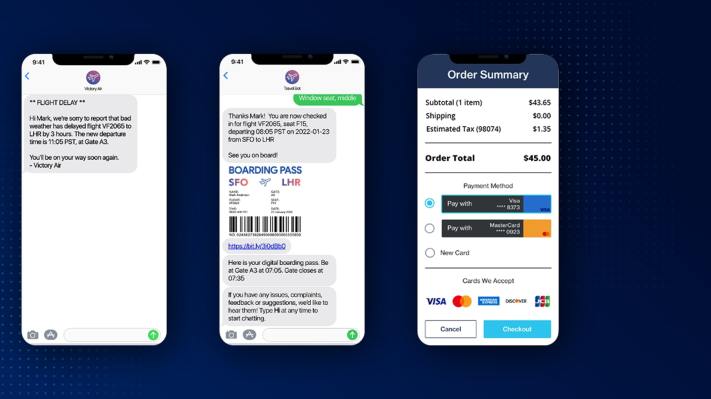 The global chat commerce’s total addressable market is worth an estimated $ 80 billion and is seen as the third big wave of digital commerce after e-commerce and app commerce markets.

As the largest digital platform in the world with more users than the internet’s 4.7 billion users, it only makes sense for businesses to communicate and transact with consumers through chat channels.

Founded in 2000, Clickatell is a pioneer in this mobile communications and chat commerce space. The company helps businesses communicate with their customers via mobile messaging platforms and today is announcing that it has raised $ 91 million in a new financing round.

The Series C funding, which is coming a decade after the Sequoia-backed company raised its last round, was led by Arrowroot Capital, with Kennedy Lewis Investment Management, Endeavor Global and Harvest participating.

Founded in South Africa, Clickatell is headquartered in California, with offices in Nigeria and Canada. Pieter de Villiersthe company’s founder and chief executive officer, told TechCrunch he started the company for the internet, the fastest-growing commerce platform to communicate with the mobile phone, the fast-growing communications platform.

In 2011, Clickatell got a capital infusion from Sequoia Capital and other investors for its $ 12 million Series B round to move beyond customer engagement and add payments into one of its numerous offerings.

In a chat commerce space where the likes of Twilio, Zendesk and Stripe power activities in communication platform as a service (CPaaS), contact center as a Service (CCaaS) and e-commerce payments, respectively, Clickatell plays in the intersection of the three and helps businesses deploy payments in chat channels.

On its platform, consumers can connect with brands via SMS and USSD (in Nigeria) and WhatsApp (in South Africa) to find goods and services, make purchases, track orders, and resolve issues with a text or chat.

The company claims to have developed one of the world’s first chat banking solutions on WhatsApp via its chat commerce integration with ABSA Bank, one of South Africa’s largest banks.

“In many ways, we’ve kind of had to wait for the market to come to us because if you have the first mover, you can also get too far ahead of the pack and find yourself in a desert,” de Villiers said to TechCrunch on the company’s progression from enabling customer engagement via chat to payments.

“We had to wait for things like the WhatsApp channel to open up. And two years ago, we were the first company in the world to launch payments initiated out of WhatsApp and chat banking. ”

Merchants using the platform can send payment links via SMS or WhatsApp to customers, who are then directed to a payment page to include their card details and make payments.

“We believe that chat commerce has the potential to be larger than e-commerce for the simple reason that already today, there are more people on chat than the internet, in fact almost twice as many. And so when Visa thinks about the future, and how do they serve their customers across multiple payment instruments, they decided to partner with us, ”he said.

The market opportunity for this partnership is enormous. The global contactless payment market worth $ 12 billion in 2019 is expected to reach $ 52 billion in the next five years. And the partnership will see Visa merchants and partners in 190 countries access the newly-launched platform.

Clickatell claims to have delivered double-digit profitable growth for more than a decade. Since 2020, it has processed over 30 billion interactions and 2 billion commerce transactions, the company said. In Nigeria alone, Clickatell reaches 17 million end customers and up to 1.3 million payments transactions are carried out daily.

In 2019, the California-based company sought funds to go public in the US and of course, that listing has not materialized yet considering its new private capital round. Citing why Clickatell remains private, chief executive de Villiers said the 22-year-old company needed safe funding to test out products “in a sector that is just emerging, ”however, he feels pretty confident that Clickatell’s next round would be a public one.

For now, Clickatell intends to use the Series C capital to expand its US footprint, scale its sales and marketing efforts and accelerate the development of its chat commerce offering across South Africa and Nigeria.

Clickatell is an inspiring example of how a company from South Africa can pull the future forward. Clickatell was the pioneering company that successfully first sent messages from the internet to mobile phones, and today they power some of the biggest names in communications, like WhatsApp, ”said Allen Taylor, Endeavor Catalyst managing director in a statement.