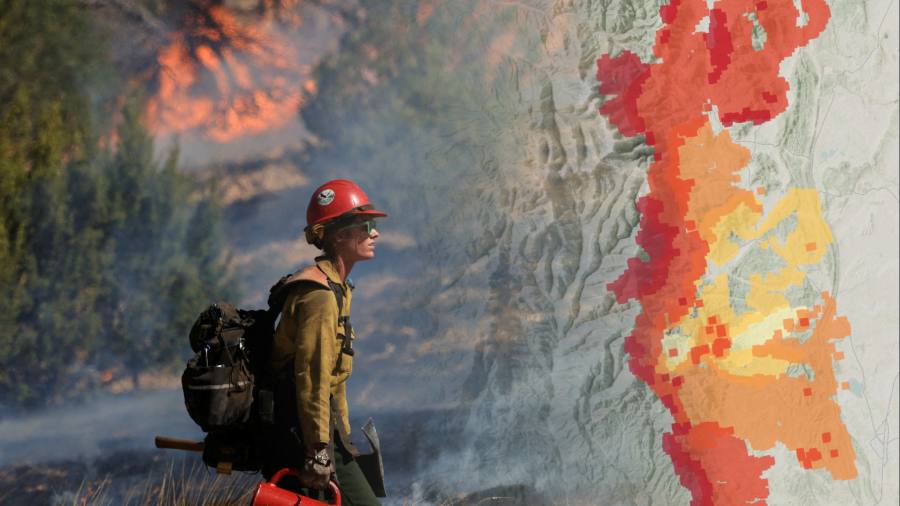 The largest and most destructive wildfire recorded in the US state of New Mexico has raged for more than 40 days, during a period marked by increasingly extreme weather events worldwide.

The Calf Canyon-Hermits Peak fire – the result of two fires that started in April and merged – has destroyed more than 300,000 acres and was still only partially controlled on Friday.

The blaze was estimated to be 40 percent “contained” by the end of the week, according to the New Mexico Fire Information website, an information hub supported by the state’s federal and state agencies. Tens of thousands of residents of San Miguel, Mora, Taos and Colfax counties were told to remain on high alert for evacuation notices and road closures.

The fire footprint spans more than 70km north to south and almost 30km west to east. More than 16,000 structures are considered threatened, and 635 have been destroyed.

In mid May, the northern part of the fire produced a pyrocumulonimbus cloud – thunder clouds created by intense heat from the Earth’s surface. This phenomenon also worsened the devastation in fires that swept Australia in 2020 and California in 2021.

The blaze is just one of a sequence of extreme weather events that have ravaged countries across the globe in recent weeks, including severe ongoing heatwaves in India and Pakistan, where peak temperatures reached 51 ° C last weekend.

In the US, residents in the state of Texas were asked to restrict use of air conditioners and appliances as temperatures reached 44 ° C last week, while a ‘megadrought’ is afflicting at least half a dozen other US states and forcing measures to conserve water and power.

In Australia, recurring floods have destroyed homes in low-lying cities and towns in Australia where the second back-to-back La Nina weather pattern has brought rain from the Pacific Ocean.

The US National Oceanic and Atmospheric Administration said Asia had experienced its warmest April on record this year, with several locations setting new records.

The FT is tracking these extreme weather events on a monthly basis as the US scientific and regulatory agency releases its assessments. A summary is below.