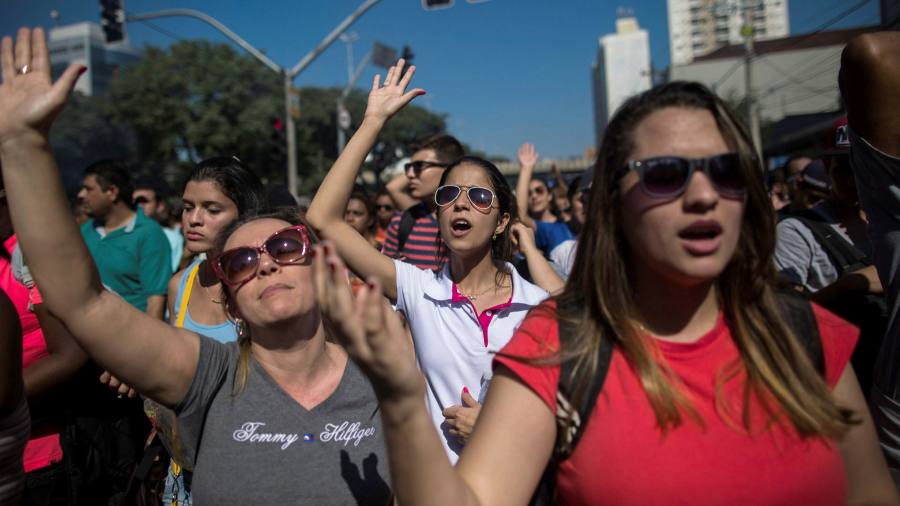 The voter drive – which signed up more than 2mn young Brazilians – would appear to benefit Luiz Inácio Lula da Silva, the environmentally aware former president known as Lula, who polls show is more popular among 16- to 24-year-olds than far- right incumbent, Jair Bolsonaro.

But research also suggests that young Brazilians are sharply conservative on a host of social issues and that corruption – long associated with Lula’s Workers’ party – remains for them one of the country’s main problems.

“It is not at all a done deal for Lula in this voter segment. The younger generation is more evangelical and conservative, ”said Mauricio Moura, chief executive of IDEIA Big Data, a polling and research company.

In the 2018 election, Bolsonaro convincingly claimed the youth demographic, with 51 percent of voters aged 16 to 24 backing the former army captain, according to IDEIA. By comparison, only 29 percent voted for Fernando Haddad, one of Lula’s top lieutenants. The former president was unable to contest the election because he was in prison on graft charges.

Since then, the polarization between conservatives and progressives has only deepened, a process fueled in part by the soaring popularity of evangelical churches in the traditionally Catholic country. More than 30 per cent of Brazilians today consider themselves evangelical Christian, up from 22 per cent in 2010.

“We have progressive groups and we have reactionary groups, but most of the population is conservative. We expect young people to be revolutionaries – and some are – but there are a lot of young people reproducing the traditional ways of religion and politics, ”said Angela Alonso, a sociologist at the University of São Paulo.

“We had center-left governments under Lula and [successor] Dilma Rousseff, so it seemed the country was heading in that direction, but most people do not share these values. ”

Alonso said the voter drive by DiCaprio and others probably helped Lula’s campaign, but noted that conservative religious leaders were already doing the same to help Bolsonaro.

It is not uncommon for religious sermons in Brazil to include a heavy dose of politics and politicians across the spectrum strive to win the support of powerful pastors and preachers. Although Bolsonaro himself officially remains a Catholic, he won the backing of the evangelical movement when he was rebaptized in the Jordan river in Israel prior to his presidential bid in 2018.

His government has since gone to lengths to keep the religious lobby happy, including appointing an evangelical supreme court justice.

Bolsonaro defends the basis of society – God, country and family. I believe that young people are proud to have him as president because he goes against a system that is destroying the foundation of society, ”said Victor de Paula Fonseca, the 28-year-old son of an evangelical preacher in São Paulo.

Lula, too, has sought to build bridges with the bloc, but upset many conservatives last month when he called for the legalization of abortion, saying it should be viewed as a public health issue.

“I support a smaller, limited government that does not attack traditional, religious, ethical and moral values. So pondering all this, a corrupt leftist who did the exact opposite [while in power] will not be my option, ”said Nathalia Goes, who attends an evangelical church in São Paulo’s east zone.

For many voters on the right, Lula’s Workers’ party is inextricably associated with the vast corruption scandal known as Lava Jato that was uncovered during the tenure of his successor, Rousseff. The former union leader himself served almost two years in prison for graft before his conviction was overturned by the Supreme Court last year because of procedural irregularities in the trial.

Corruption was a big issue across most voter segments in the previous presidential race. This year, it appears to still weigh heavily on the minds of young voters, with 27 per cent saying they think it is the main issue, according to IDEIA. That compares with 20 per cent who cite education and 15 per cent who cite the economy.

Eduardo Mello, a political scientist at the Getulio Vargas Foundation, however, disagrees, saying that “ideological issues are no longer that important”.

“Most young voters were swayed [in 2018] by the anti-corruption issue and by the whole idea of ​​renewing politics. This is no longer the case. The issues that are more important for young voters are the economy and the performance of the government in dealing with the pandemic, which is perceived as atrocious.

“Lula is more likely to dominate these issues, so I would anticipate young voters will swing left this time,” he added.

Bolsonaro, meanwhile, took to Twitter to hit back at DiCaprio for his campaign: “Our people will decide if they want to keep our sovereignty on the Amazon or to be ruled by crooks who serve foreign special interests. Good job in The Revenant! ”