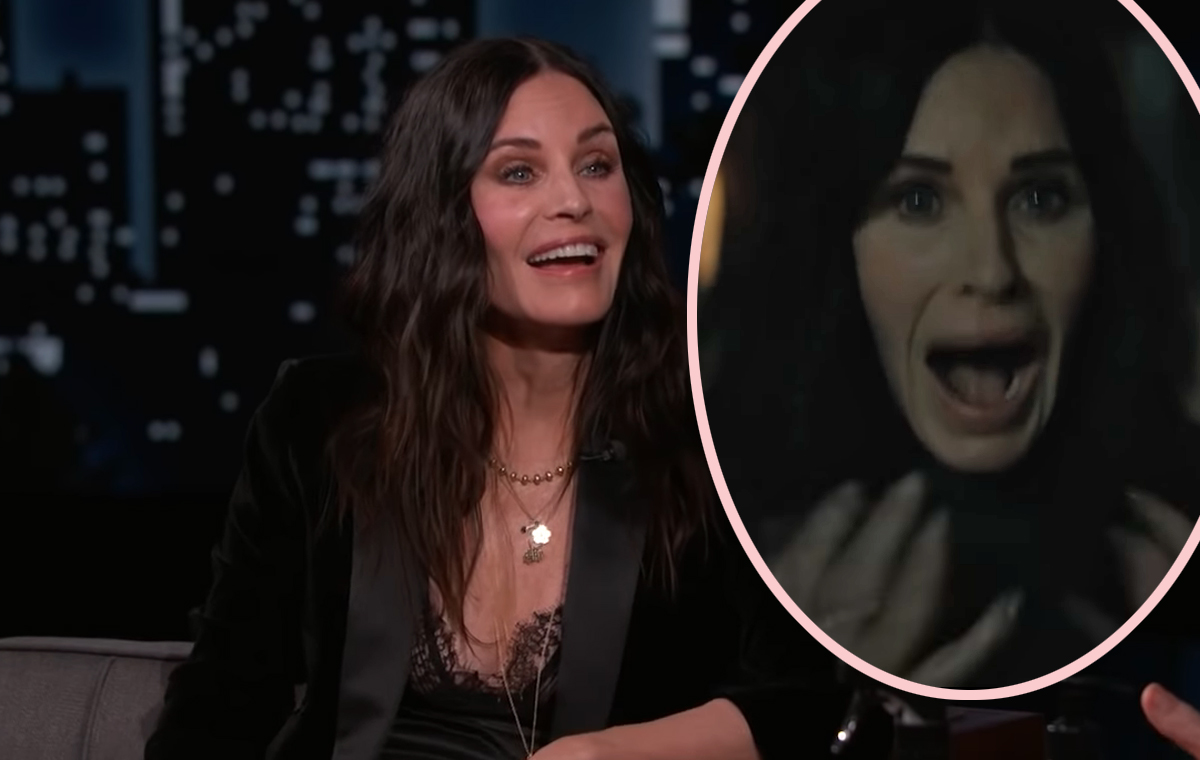 Whoa! Courteney Cox is the latest celeb to reveal their haunted house story! And it’s no joke!

The Friends star is taking the lead in a new horror-comedy series called Shining Valeabout a mother of a teen daughter who moves into a haunted house – and it sounds like the whole thing is just way too close to home for the 57-year-old!

Related: Courteney Regrets Work On Her Face Because She Started ‘Looking Really Strange’

Naturally, when she stopped by Jimmy Kimmel Live to plug the show, she got asked about her own experiences with thqt25r4ed3e paranormal. Jimmy Kimmel asked offhand:

“Are you a believer in ghosts? Have you had a ghost experience? ”

We had no idea what we were in for, and we’m guessing neither did Jimmy! Because Courteney revealed a truly bone-chilling tale about living in a haunted house!

“I did not believe at first, but I lived in this house in Laurel Canyon, which is in LA, obviously. It was Gypsy Rose Lee’s house and Carole King. “

Gypsy Rose Lee was a burlesque dancer and murder mystery novelist back in the 1940s. Years later, Carole King is of course one of our greatest living songwriters. When she had owned the house, she learned it was haunted – and told Courteney! The Scream alum revealed:

“So Carole King came over to my house and she said there had been a divorce that was really ugly, and there was a ghost in the house. And I was ‘Yeah, whatever.’ But other people who had stayed there with me, like friends of mine, said they felt an encounter with a woman who was sitting on the edge of the bed. And I was like, ‘Yeah, whatever.’ ”

But of course it was Carole King, so Courteney played along. She revealed:

LOLz! Courteney was such a non-believer she never gave it a second thought! Until a total stranger freaked her the eff out!

“But then I was at the house one day not being a believer. And the doorbell rang. It was a UPS guy or something. And I opened the door and he said, ‘Do you know this house is haunted?’ ”

“And I go, ‘Yeah, why? Why do you think that? ‘ And he goes, ‘Because there is someone standing behind you.’ ”

Whoa! She turned into a believer pretty darn quick after that! She quipped:

But for real, what that UPS guy said really did a number on her as she exclaimed:

“It’s so scary! I could not sleep there alone ever again! ”

Jimmy asked if she really sold the house just because of the ghost scare, and she admitted:

“Probably… You do not think of it the same way. You start seeing things… ”

YOU can start seeing things when Shining Vale premieres on Sunday, March 6 on Starz. See all the ghost talk starting at about the 8:40 mark (below)!