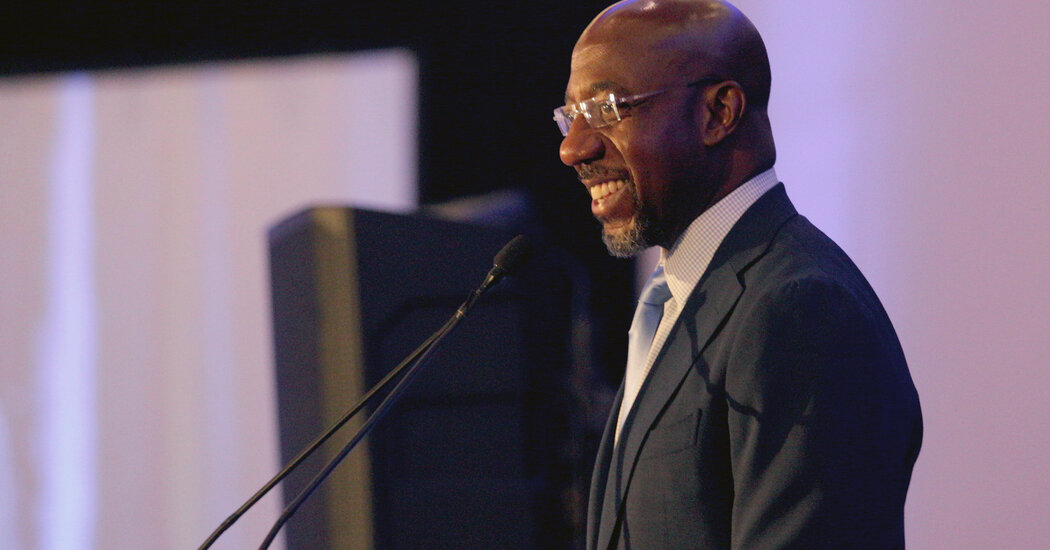 ATLANTA – Standing at the pulpit of Ebenezer Baptist Church, the spiritual home of Martin Luther King Jr., the Rev. Raphael Warnock led a sermon on the last Sunday before Georgia’s Tuesday primaries that was about “getting to where you need to go” – and navigating the challenges ahead.

“Rise up and transform every opposition, every obstacle, into an opportunity,” Mr. Warnock urged. He was not explicitly talking about his other job as a United States senator, or the fact that he is one of the most endangered Democrats in the country in 2022, or the headwinds confronting his party. But he might as well have been.

“Do not you dare sleep on Tuesday,” he said.

For months, nearly all the political oxygen in Georgia and beyond has been sucked up by ferocious Republican primaries, intraparty feuds that have become proxy wars for Donald J. Trump’s power and fueled by his retribution agenda. But the ugliness of the GOP infighting has at times obscured a political landscape that is increasingly tilted in the Republican direction in Georgia – and nationally.

Democrats were excited for Stacey Abrams, the former state legislator and voting-rights activist, to jump into the 2022 governor’s race, promising a potential rematch of the 2018 contest she only narrowly lost. Mr. Warnock has emerged not only as a compelling speaker but also as one of his party’s strongest fund-raisers. Yet the growing fear for Democrats is that even the strongest candidates and recruits can outrun President Biden’s wheezing approval ratings by only so much, and are at risk of getting washed away in a developing red wave.

“I think 2020 was a referendum on Trump,” said Ashley Fogle, a 44-year-old Democrat who lives in Atlanta and attended Ebenezer Church on Sunday. “I just do not know if there is that same energy in 2022.”

Already, a Republican-led remapping in Georgia has effectively erased one Democratic House seat and made another vulnerable, as the Republican advantage in the state delegation could balloon to 10-4, from the current 8-6 edge.

The challenges facing Democrats are cyclical and structural.

The Democratic majorities on Capitol Hill could scarcely be narrower. The party in power almost always loses in a president’s first midterm election – even absent the current overlapping national crises, some of which are beyond Mr. Biden’s control.

Gasoline prices just hit their highest level ever nationwide over the weekend. The president’s approval rating plunged in an Associated Press poll to a new low of 39 percent. The stock market dropped for the seventh consecutive week. Violent crime rates have spiked. A baby formula shortage has alarmed parents. And inflation remains high.

“The problem is not messaging – the problem is reality,” said Representative Ritchie Torres, Democrat of New York, citing inflation as the “greatest obstacle to retaining the majority.”

The greatest hope for Democrats appears to be potential Republican acts of self-sabotage: the party nominating outside-the-mainstream candidates or failing to coalesce after divisive primaries.

In Washington, much of the Biden agenda is frozen in a congressional morass. The party’s left wing and centrists are busily blaming each other for the state of affairs and clashing over what to do next, with student loan forgiveness emerging as one divisive flashpoint.

Inside the White House, whose political operation has been a subject of quiet griping in some corners for months, a furious effort is afoot to reframe the 2022 elections as a choice between the two parties, rather than a referendum on Democratic rule. Anita Dunn, an aggressive operator and longtime Biden adviser, has joined the administration to sharpen its messaging.

“The Democratic base is quite demoralized at this moment,” Senator Bernie Sanders of Vermont, one of the party’s leading progressive voices, put it bluntly.

If Georgia was the scene of the highest highs for Democrats in the 2020 cycle – turning blue at the presidential level for the first time since 1992, flipping two Senate seats to cement control of the chamber and providing Democrats their only tightly contested House pickup in the nation – it is not clear whether the ideologically sprawling and multiracial Biden coalition that unified to oust Mr. Trump is replicable.

Energized Black voters, moderate white suburbanites, Asian Americans and some Hispanic Americans all played a role in propelling Democratic victories in the state in 2020 and 2021, while some of the rural Republican base stayed home in the January Senate runoffs.

This fall, Mr. Warnock is expected to face Herschel Walker, the Republican former football star with scant political experience. Mr. Warnock has already begun leveraging a $ 23 million war chest to tell voters that he feels their pain – and to make plain the limits of his power as a freshman senator.

“People are hurting. People are tired, ”Mr. Warnock said in his first television ad this year. More recently, he took a different approach, almost pleading with disaffected voters: “I’m not a magician.”

Representative Carolyn Bourdeaux, whose Georgia district was redrawn after she captured what had been a Republican-held seat in 2020, is now facing a primary on Tuesday against Representative Lucy McBath outside Atlanta. Ms. Bourdeaux, a moderate, had a warning for her party.

“They need to do more to clearly communicate with voters that they are a steady hand at the wheel of getting the economy back on track for people,” Ms. Bourdeaux said. But she, too, saw a chance to draw a sharp contrast with what she cast as ascendant far-right Republicans. “The other side, candidly, has lost its mind,” she said, pointing to efforts to restrict voting rights and abortion rights.

In the Republican race for governor, Gov. Brian Kemp has been locked in a primary with former Senator David Perdue, who was recruited by Mr. Trump. The former president remains angry at the governor for certifying the 2020 election and, according to people close to him, unlikely to ever endorse Mr. Kemp.

Ms. Abrams has emerged as a national star among Democrats. But privately Democratic strategists fear that her high-water mark might have come in 2018, when she lost in a Democratic wave year.

Most polling shows a close race for governor and Senate, with a slight Republican advantage.

As general-election matchups come into focus, Mr. Biden’s advisers argue that there is still time to crystallize a clear choice between the president and congressional Democrats, and the other side. Republicans have already elevated candidates like State Senator Doug Mastriano, a far-right 2020 election denier who is the Republican nominee for governor in Pennsylvania. And as the Supreme Court appears poised to overturn Roe v. Wade, many Republicans have embraced stringent anti-abortion positions, views that are often out of step with the majority of Americans, polling shows.

Democrats are seeking to cast Republican candidates as extremists more consumed with culture wars than finding solutions to the nation’s most pressing problems, and the president’s advisers and allies say Democrats will continue to push the message that they are doing everything possible to lower prices.

But Ms. Bourdeaux, who is locked in a primary battle of her own, said that the kind of Democratic intraparty “infighting that you’re seeing right now” complicates the party’s messaging.

Mr. Warnock told his congregation he met with Mr. Biden at the White House, putting up a photo on the screen of a selfie he took with a picture of Ebenezer Baptist Church that hung in the halls of the West Wing.

Why are these midterms so important? This year’s races could tip the balance of power in Congress to Republicans, hobbling President Biden’s agenda for the second half of his term. They will also test former President Donald J. Trump’s role as a GOP kingmaker. Here’s what to know:

What are the midterm elections? Midterms take place two years after a presidential election, at the midpoint of a presidential term – hence the name. This year, a lot of seats are up for grabs, including all 435 House seats, 35 of the 100 Senate seats and 36 of 50 governorships.

What do the midterms mean for Biden? With slim majorities in Congress, Democrats have struggled to pass Mr. Biden’s agenda. Republican control of the House or Senate would make the president’s legislative goals a near-impossibility.

What are the races to watch? Only a handful of seats will determine if Democrats maintain control of the House over Republicans, and a single state could shift power in the 50-50 Senate. Here are 10 races to watch in the House and Senate, as well as several key governor’s contests.

When are the key races taking place? The primary gauntlet is already underway. Closely watched races in Pennsylvania, North Carolina and Georgia will be held in May, with more taking place through the summer. Primaries run until September before the general election on Nov. 8.

Go deeper. What is redistricting and how does it affect the midterm elections? How does polling work? How do you register to vote? We’ve got more answers to your pressing midterm questions here.

That issue, in particular, has divided the White House into factions – including Mr. Biden himself who has both expressed opposition to perceived giveaways to college-educated elites and said he was considering wiping out some debts. Progressives have pushed for sweeping loan forgiveness to motivate the base.

An AP poll on Friday showed only 21 percent of Americans believed the country was headed in the right direction. A CBS News / YouGov survey on Sunday showed 65 percent of Americans said Mr. Biden was “slow to react” to important issues and events. And his approval rating among Democrats was at just 73 percent in the AP survey.

“If I had hair to catch fire,” Mr. Carville said, “it would catch fire.”

In an episode that exposed the depth of the alarm for Democrats, the lawmaker who oversees the House Democratic strategy – and the man perhaps most responsible for recruiting reluctant candidates into tough races – himself took refuge into a safer district in New York last week, after a court-ordered redrawing of the state’s lines.

The decision by Representative Sean Patrick Maloney, chairman of the Democratic Congressional Campaign Committee, flared both ideological and racial tensions inside the caucus. Republicans looked on with glee.

“The fact that you have senior members abandoning their districts to run against their own colleagues, I think that shows you how toxic this environment is,” said Representative Tom Emmer, the chairman of the National Republican Campaign Committee.

In Georgia, Kevin Pearson, a retired firefighter and Ebenezer congregant, has been volunteering with voter registration efforts and is concerned that he’s seen Mr. Warnock trailing in some polls.