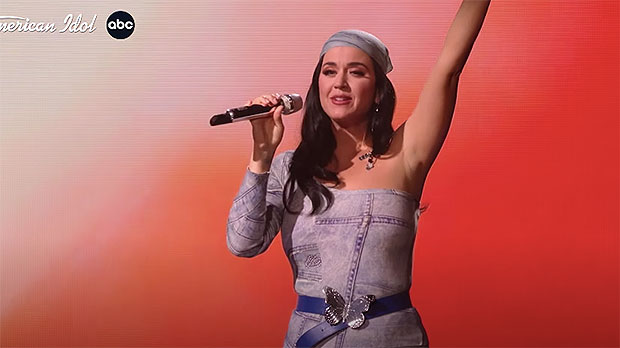 Katy Perry made her grand entrance during the American Idol season 20 finale at the start of the show. She walked out onto the stage in a stunning silver sequined dress with ruffles and floral detailing. She took her seat alongside Luke Bryan spirit Lionel Richie to hear the top 3 honor Bruce Springsteen.

Katy’s first performance was with country star Thomas Rhett. They performed their new song “Where We Started.” Since this is KP we’re talking about, Katy changed out of her sequined dress and into an all-denim look. She rocked a one-shoulder denim print dress with a matching bandanna. Katy completed her look with a bright blue belt adorned with a silver butterfly.

Thomas and Katy ended their performance by walking down a set of stairs. They shared a sweet hug together once the song was over. Thomas and Katy certainly make sweet music together!

Thomas revealed in a recent interview with ONE that a music video for “Where We Started” is “coming out late this year.” He added, “Just a pretty wild dream for me for sure. For me to get to do a song for someone like Katy Perry, it’s nuts.

Katy performed twice during the American Idol finale, the second time with top 3 finalist Leah Marlene. They sang a stellar rendition of Katy’s hit “Firework.” Katy slayed in a red sequined dress with a thigh-high slit. Katy and Leah’s harmonies were simply incredible.

Leah came in third place. HunterGirl spirit Noah Thompson were the final two contestants in the running to win season 20. HunterGirl performed an amazing duet with Luke, while Noah sang with Melissa Etheridge.

Katy, Lionel, Luke, and Ryan Seacrest will return for American Idol season 21. This will mark the show’s sixth season on ABC. The new season is expected to premiere in early 2023 on ABC.