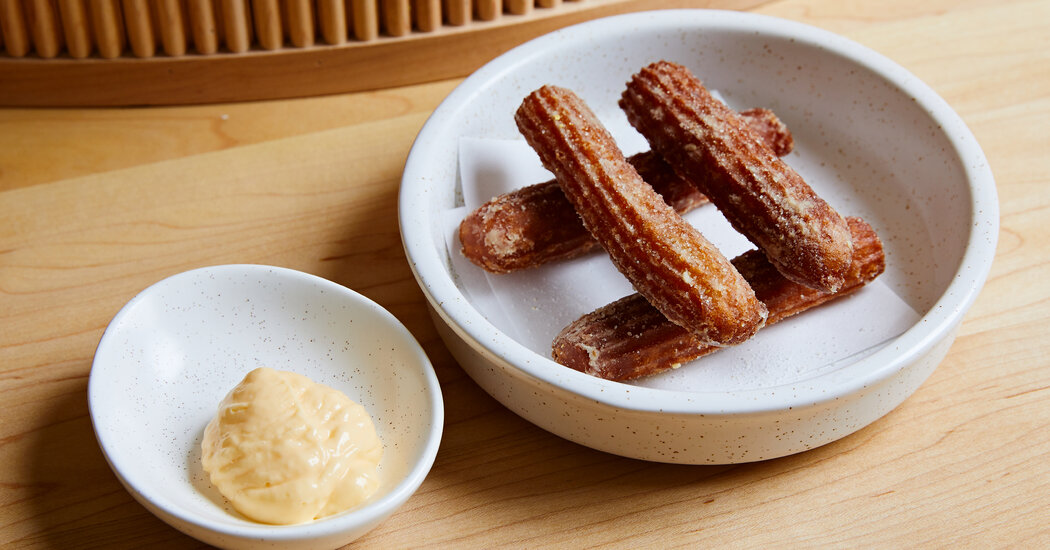 There’s this fantastic song by the R&B artist Tinashe and the DJ MAKJ called “Save Room for Us,” and I hear it in my head every time I sit down at a restaurant that I know has a dessert menu. It’s a subject I just will not shut up about, because when done right, dessert can elevate an already wonderful meal. Without it, you’re making it all the way to the end zone – only to score a field goal. (In nonsports parlance, it’s like a Macy’s Thanksgiving Day Parade without Snoopy – it’s still great, but it feels incomplete!)

For many restaurants, dessert is a matter of resources. In dire times, pastry chef positions are usually the first to get cut. And yet, I find that as a diner when I encounter an exciting, wide-ranging dessert menu, I’m more likely to spend a bit more money to end the night with something sweet. It’s a real Catch-22.

As my colleague Becky Hughes pointed out last fall, the city’s short but brilliant Hot Restaurant Summer ™ brought with it a renewed interest in sweets. Here are six restaurants (and one cafe) that understand the importance of an impressive dessert lineup.

Whenever I go to Sofreh in Prospect Heights, I always punctuate my meal with the baklava drizzled in citrus rose syrup and the Persian ice cream trio with saffron, rosewater and pistachio ice creams because, in my humble opinion, they taste even better together – think kesar pista. (You can also sample a handful of their desserts and breads at the months-old Sofreh Cafe in Bushwick.)

To Hawksmoor in the Flatiron district, the first American outpost of the popular London steakhouse, I more or less felt it was my civic duty to try the entire dessert menu from the pastry chef Carla Henriques. I’ll be dreaming of the Meyer lemon meringue dessert, with its ice cream and lemon curd insides, for a long time to come.

If you can get a seat at Gage & Tollner in Downtown Brooklyn, you’ll watch half a dozen baked alaskas fly by your table, one of many dessert options, not counting the celebration cakes you can order ahead of time. (Hot tip: If you’re looking for a show, ask for the off-the-menu flaming baba au rhum, or try the brand-new amaretto coffee sundae.)

Even one or two special dessert offerings can do the trick. The tasting menu at Jua in Flatiron ends with the platonic ideal of a hotteok, a type of Korean pancake, which chef Hoyoung Kim calls “Korean soul food.” It alone is worth the $ 130 price of admission, if you ask me.

At the Williamsburg outpost of the sushi restaurant Nami Nori, which specializes in temaki hand rolls, one of two desserts on the menu is a plate of “mochurros.” They’re so simple yet so brilliant: dough made from glutinous rice flour – the base of mochi – piped and deep fried like a churro, and served with a shallow bowl of tangy lemon curd. And of course there’s the city’s hottest fruit platter at the Cantonese-influenced Bonnie’s, also in Williamsburg, with star fruit, witch finger grapes, dragon fruit, lychee, orange slices and mango. It’s as thoughtful as the immigrant parents who inspired it. (Pete Wells advises getting to the door the moment it opens if you want a seat.)

I can not say whether the dessert menu is back or not, but I’m sure it still matters to those who, like myself, consider themselves dining completists.

Real quick, I’d like to say thank you for all of the well wishes that appeared in the Where to Eat inbox last week. I’ve been reading through the many queries you have about dining around New York City and will try my best to answer them in future newsletters and, somewhat rarely, in direct emails. I’m at wheretoeat@nytimes.com for questions, requests and polite suggestions.