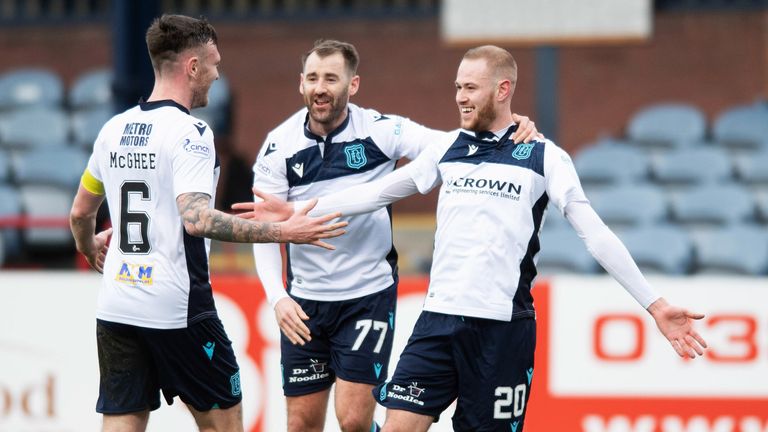 Dundee remain bottom of the Scottish Premiership after Ross County came from behind to secure a 2-1 victory at Dens Park.

Zak Rudden gave the Dark Blues a first-half lead with Joseph Hungbo equalizing for County just seconds before the break.

Regan Charles-Cook had a penalty saved in the second half but the league’s top scorer later made amends to net what proved to be the winner, with Dundee reduced to 10 men in stoppage time when Vontae Daley-Campbell received a straight red card.

The result moved the 10th-placed Staggies eight points clear of rock bottom Dundee, who have now gone nine games without a league win.

The home side were on the attack from the first whistle and came agonisingly close to opening the scoring with just 30 seconds on the clock as Paul McMullan hit a ferocious 25-yard shot that cannoned off the top of Ross County ‘keeper Ross Laidlaw’s crossbar.

Charles-Cook then had to make a vital challenge in his own box as Daley-Campbell looked to pull the trigger.

However, Dundee took the lead in the 24th minute. Skipper Jordan McGhee teed up Rudden inside the Staggies box and the striker made no mistake, clinically drilling the ball low past Laidlaw.

Dundee then had a gilt-edged opportunity to double their advantage when Rudden linked with McMullan down the right before the winger laid the ball on a plate for Max Anderson, but the midfielder shot straight at Laidlaw with the goal at his mercy.

However, right on the stroke of half-time, the Staggies equalized after the ball broke to Hungbo on the left and he advanced on goal before hitting a shot that beat Adam Legzdins at his near post.

Ross County then had a superb chance to make it two in the 59th minute when they were awarded a penalty by referee Don Robertson after Cammy Kerr was deemed to have handled a Connor Randall cross inside his own box.

Charles-Cook stepped up to take the spot-kick but it was a tame effort and a grateful Legzdins made a vital save.

Despite that, County looked the likelier to take the lead as the half progressed and so it proved in the 80th minute with Charles-Cook racing down the right before producing an emphatic finish high past the exposed Legzdins.

Daley-Campbell was dismissed in added time for a reckless challenge on Harry Paton.

Dundee travel to Hearts on Wednesday – kick-off 7:45 pm – while Ross County hosts Livingston on the same day, also at 7:45 pm.