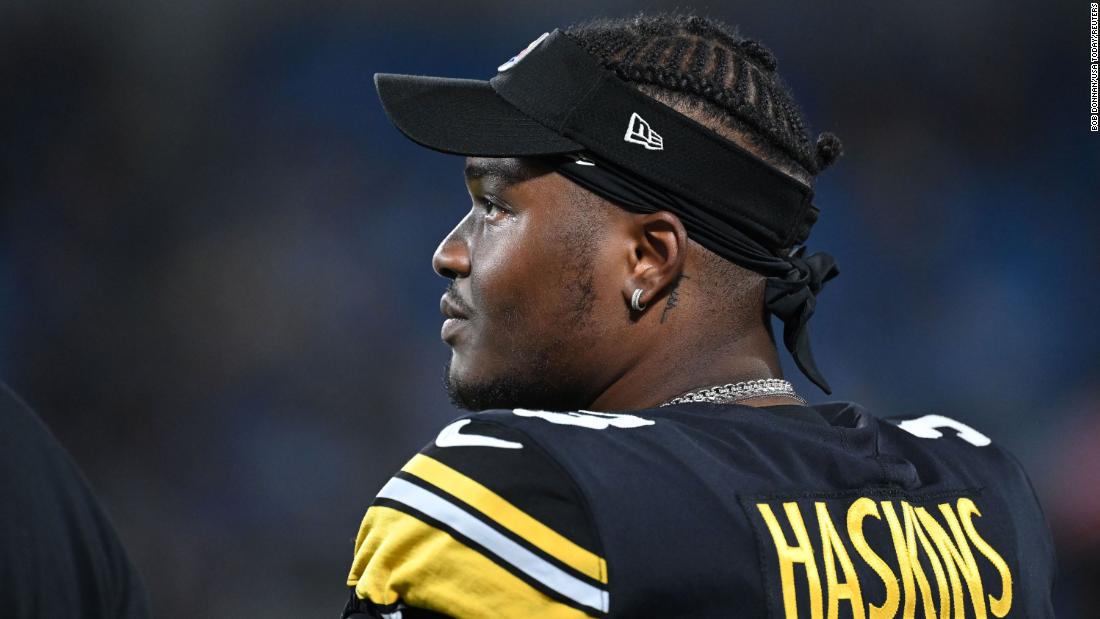 “I’m calling because my husband is stuck on the side of the highway. He had to go walk and get gas, and then he said he was returning to the car on the highway,” a woman who said she was Haskins’ wife , Kalabrya Haskins, told an emergency operator. “We were on the phone, he said he was going to call me back after he finished putting the gas in.

“I kept calling and calling and he was not answering, and eventually – I continued to call him, the phone eventually cut off, and it’s not working now. I have his location, and I just want someone to go in the area and see if his car is there and if he’s okay and if anything happened to him, “she said. “That’s just not right for him not to call me back and his phone to go dead, and he’s just stranded by himself.”

She said she was in Pittsburgh, but had been on the phone with Haskins.

The call was released Wednesday by Florida Highway Patrol, about 10 days after Haskins, 24, was killed while trying to cross Interstate 595’s westbound lanes in Broward County on the morning of April 9. He had been “walking on (the highway) for unknown reasons, “the patrol said in the initial news release.

Several other 911 calls and a traffic crash report released together Wednesday by the patrol add further details to the fatal incident.

In one of the 911 calls, an unidentified woman said that a person was struck on the highway.

“There was a man hit in front of me. I was traveling on the road and I saw a dump truck hit the man,” the woman said.

Haskins was struck by the front left side of a dump truck driving in the center lane of a three-lane highway, according to the crash report. Haskins then came to rest lying prone in the inside lane, the report states. The driver of a vehicle in that lane veered left to try to avoid hitting him, but the right side tires or undercarriage partially contacted Haskins, the report states.

The two vehicles then came to a controlled stop on the side of the road, the report states.

The drivers were not distracted at the time and they had “no contributing action” at the time of the crash, according to the report.

Haskins had been in South Florida working out with some Pittsburgh Steelers teammates, as captured in Instagram stories from Haskins and running back Najee Harris.

His family plans to hold multiple services this weekend to honor him. A memorial service will be held in his hometown of Rockaway Township, New Jersey, on Saturday, followed by a vigil on Sunday at his high school in Potomac, Maryland.

The family chose to have multiple services “in order to share their son’s memory with family, coaches, teammates and childhood friends.”

“We have had such an overwhelming outpouring of love for our son since the news broke of our loss,” Tamara and Dwayne Haskins, Sr., parents of Haskins, said in a statement on Tuesday.

“Anyone who knew Dwayne, knows he worked exceptionally hard to achieve such a high level of success at such a young age. He was touched by so many people on his journey to being a standout athlete and we are grateful to all of them. This pain is unimaginable and we appreciate everyone who shares in our heartbreak. “

A reserve for the Steelers last season, Haskins was poised to enter his fourth year in the NFL.

He rose to prominence at Ohio State, where he set OSU and Big Ten Conference records as a redshirt sophomore in 2018, including single-season passing yards (4,831), touchdown passes (50) and total offensive yards (4,939). He led the Buckeyes to a 13-1 record and a win in the Rose Bowl, and he finished third in voting for the Heisman Trophy, awarded to college football’s most outstanding player.
Washington selected Haskins as the 15th overall pick in the 2019 NFL Draft, but he did not live up to his lofty status. He played 16 games across two seasons for the team, compiling a 3-10 record in 13 starts.
Haskins was released in December 2020 toward the end of his second season after he was benched in a loss and following a fine of an undisclosed amount for violating team Covid-19 protocols by going maskless at his girlfriend’s birthday party.
A month after his release, the Steelers picked him up, though he did not enter a regular-season game for Pittsburgh. He spent last season as the third-string quarterback behind the now-retired longtime Steeler Ben Roethlisberger and backup Mason Rudolph.
Last month, Haskins re-signed with the Steelers for one year and was set to compete with Rudolph and new Steelers acquisition Mitchell Trubisky for positions on the depth chart.
“I feel like I can be a starter in this league. I got drafted for that reason,” Haskins said in January, according to Steelers.com. “I definitely believe I have the talent to. I just haven’t put it all together yet. And that’s something I have to do this offseason to put myself in position to play.”