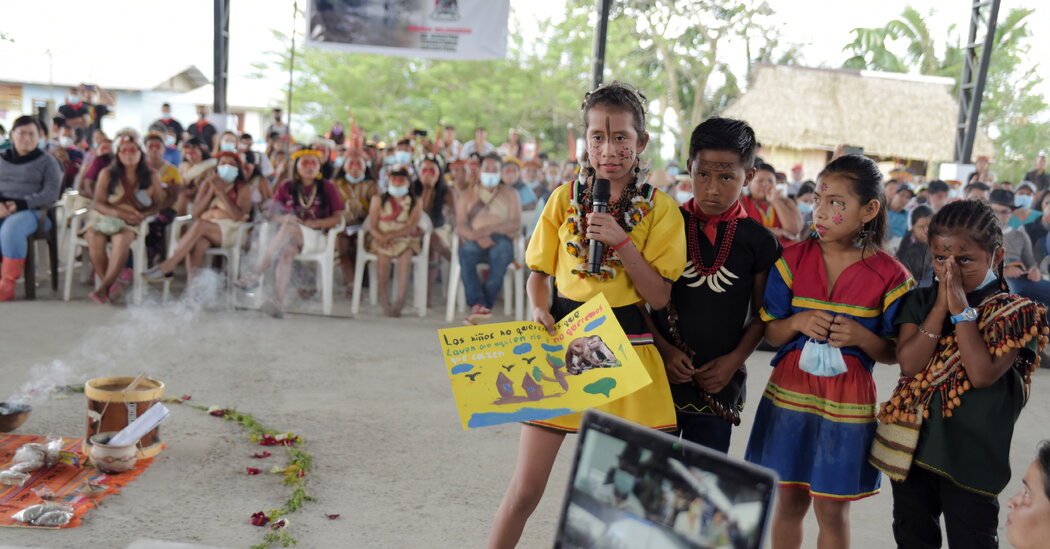 In a victory for Indigenous communities in Ecuador, the country’s highest court ruled on Friday that they must have a far stronger say over oil, mining and other extractive projects that affect their lands.

The ruling is a blow to the ambitions of Ecuador’s president, Guillermo Lasso, who had planned to double oil production and expand mining in coming years.

“We are a small community, but we have achieved something so great, so historic, that it will serve other communities that have the same problems of mining, oil and other extractive activity in their territories,” said Wider Guaramag, a member of the A’i Kofán community of Sinangoe, in the country’s north, which brought the lawsuit with legal representation from Amazon Frontlines, a nonprofit group.

According to the ruling, if an Indigenous community refuses a project, the government can still move forward in “exceptional cases.” But it also states that “under no circumstances can a project be carried out that generates excessive sacrifices to the collective rights of communities and nature.”

Brian Parker, a lawyer with Amazon Frontlines who worked on the case, said the ruling represented “a huge shift of power” in the country. The government has been able to do what it wanted, he said. “Now they need to get consent.”

A growing body of research shows that nature is healthier on the more than a quarter of the world’s lands that Indigenous people manage or own. Two substantial oil spills have polluted the Ecuadorean Amazon since 2020, the most recent one being just last week.

The A’i Kofán community of Sinangoe is home to hundreds of people who live along the Aguarico River in northern Ecuador, where the foothills of the Andes meet the Amazon. Their case has its origins in gold mining, which has devastated areas of the Amazon in recent years as global prices surged. When prospectors started illegally searching for gold on their land, they organized community patrols and detained some of them. Then, in early 2018, they found heavy equipment on the bank of the river opposite their land. When they learned that the government had allowed it, they sued and won in a lower court. The gold mining concessions were canceled.

But their case did not stop there. Ecuador’s highest court chose to weigh in, and its ruling applies to all 14 of the country’s recognized Indigenous groups. Their lands include 70 percent of the Ecuadorean Amazon, rich in oil and minerals, according to Amazon Frontlines.

“It’s by far one of the most powerful rulings that supports free, prior and informed consent to Indigenous peoples to date,” said Oscar Soria, a campaign director at Avaaz, a human rights group. “This will have enormous implications.”