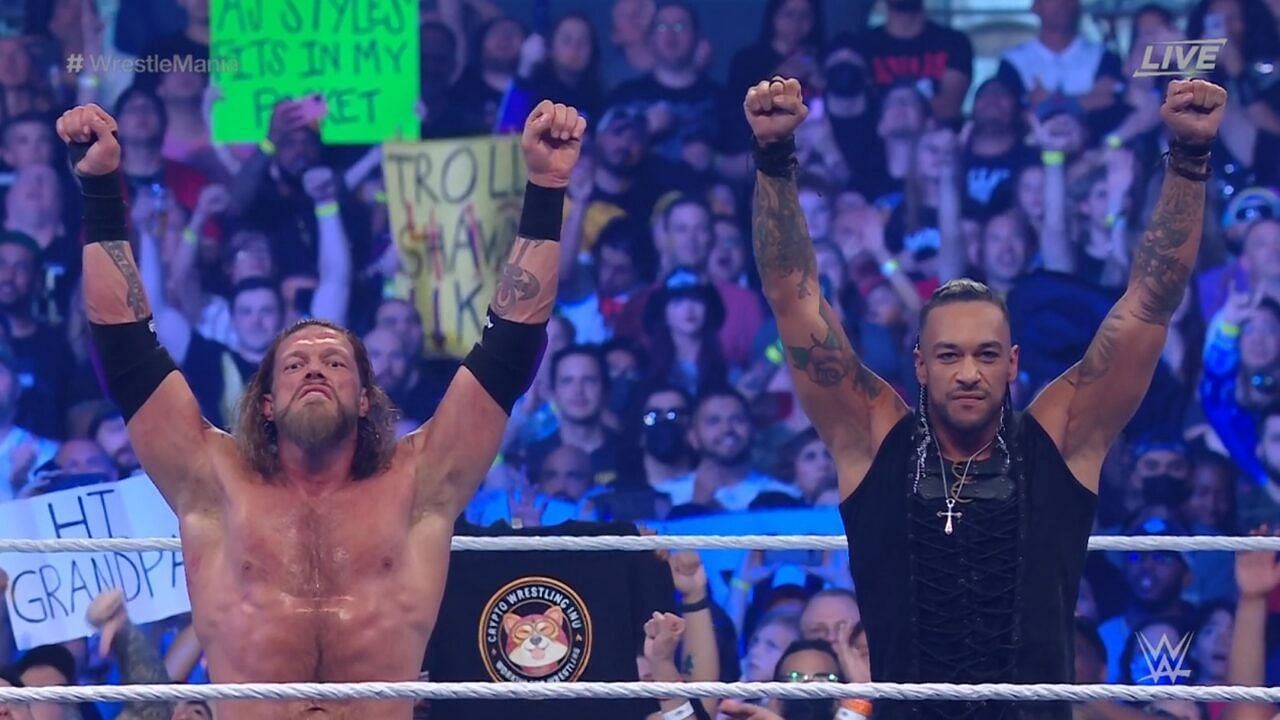 Edge and Damien Priest have entered a partnership after Priest helped The Rated R Superstar defeat AJ Styles on Night Two of WrestleMania 38. Edge has now hinted that the seeds for the team-up were planted a year in advance.

The angle began when AJ Styles answered The Rated R Superstar’s call for a match at WrestleMania. However, The Ultimate Opportunist quickly turned heel and attacked The Phenomenal One. Priest, on the other hand, did not have a match at The Show of Shows, but served as a distraction to AJ.

The 11-time World Champion today tweeted a photo of himself and Priest from last night’s RAW alongside a picture of the two shaking hands from the show’s February 1 2021 episode. He claimed that as far as their partnership is concerned, “The seeds were sown a year ago.”

The two came out on last night’s RAW and confirmed their alliance. The promo was interrupted by Styles, who was then beaten up. All signs point to AJ and the Hall of Famer continuing their rivalry until WWE’s upcoming premium live event, WrestleMania BackLash.

There has been a pitch that has been talked about heavily from creative that would see Edge get a new stable.

There have been several notable names that have been discussed for the group, including Damian Priest.

There has been a pitch that has been talked about heavily from creative that would see Edge get a new stable.There have been several notable names that have been discussed for the group, including Damian Priest.- @FightfulSelect https://t.co/lrkFArF4a9

Edge’s partnership with Damian Priest seems to be the beginning of a new stable. Per Fightful.com, more talent will soon join the pair. The names suggested so far include Tommaso Ciampa and Rhea Ripley, although there is no confirmation for either as of yet.

Before joining hands with the first-ever Money In The Bank winner, Priest had recently lost his United States Championship to Finn Balor and subsequently turned heel.

Ripley recently formed a tag team with Liv Morgan. They competed in the Women’s Tag Championship four-way tag match on Night Two of WrestleMania 38. The partnership already looks to be on the rails as The Nightmare snubbed Morgan after their match.

Ciampa lost his bout against Tony D’Angelo at NXT: Stand & Deliver on April 3. It appears that his NXT days are over, as he was given a send-off at the end of the match.

Ciampa has made appearances on RAW in recent weeks. He was also part of the Andre the Giant Memorial Battle Royal on the WrestleMania edition of SmackDown. It seems that he has received his main-roster call-up.