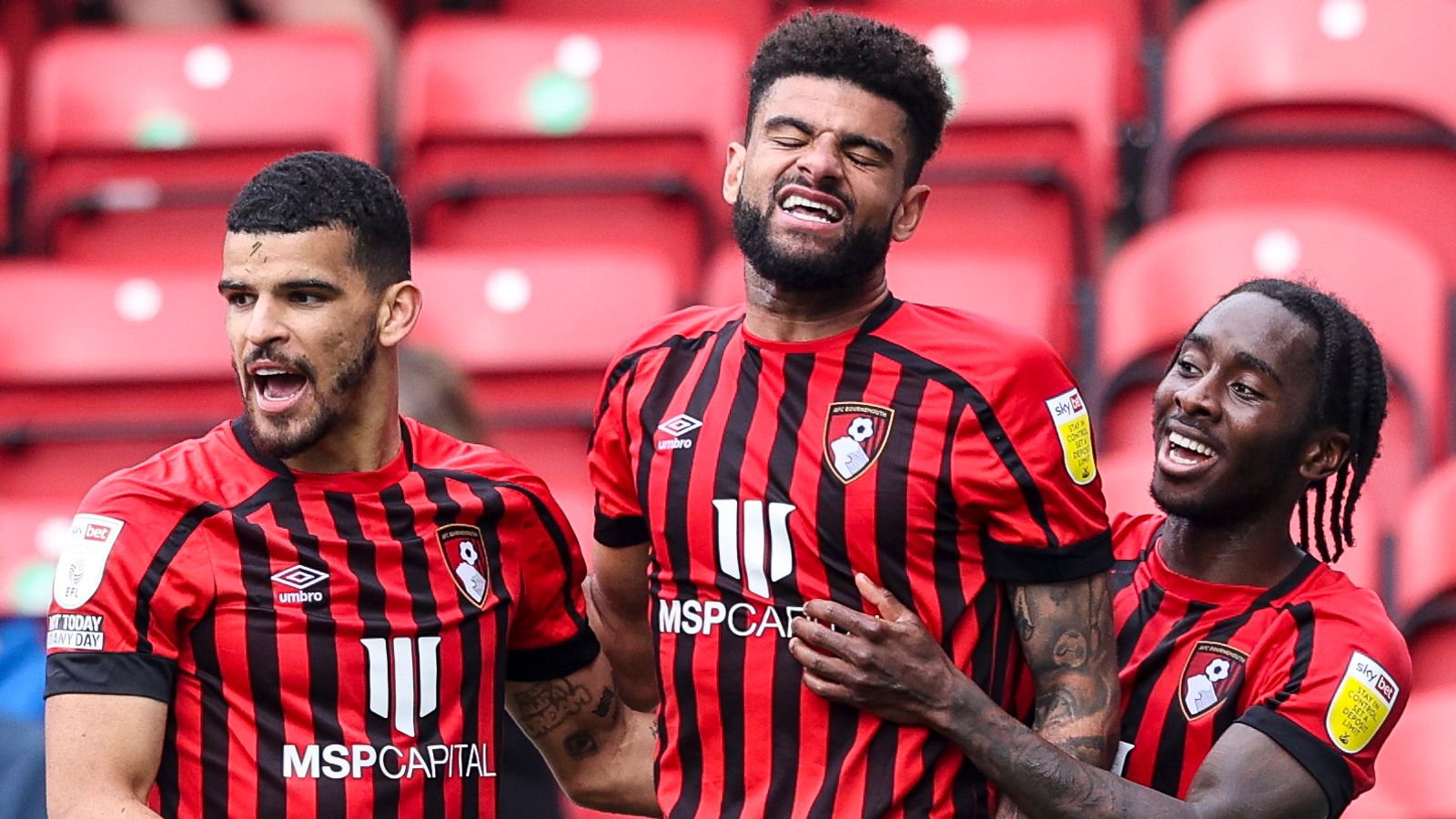 Dominic Solanke’s 30th goal of the season helped Bournemouth retain the advantage over Nottingham Forest in the race for automatic promotion from the Sky Bet Championship.

The former Liverpool and Chelsea forward’s 21st-minute effort, followed by two in the second half from Philip Billing, secured a 3-0 win and ended Blackburn’s play-off chances.

It kept the Cherries three points ahead of Forest, 5-1 winners over Swansea, ahead of the pair’s meeting in midweek.

It also means Fulham’s coronation as champions will have to wait until at least Monday, when a win against Luton will provide confirmation.

Having taken a 23rd-minute lead when Jack Colback’s deflected effort went in for a Cyrus Christie’s own goal, Steve Cooper’s side were soon pegged back by Michael Obafemi – but Surridge’s hat-trick and Alex Mighten’s late strike set up a potentially decisive clash on Tuesday. .

Huddersfield remain in fourth but automatic promotion is essentially now beyond them, such is their inferior goal difference, after their 2-1 win at Coventry.

Harry Toffolo’s fourth goal in six matches put the hosts ahead and January signing Tino Anjorin’s penalty – his first for the club – doubled the advantage before Viktor Gyokeres pulled one back late on.

Middlesbrough remain in the hunt for a play-off place after a 3-1 win at home to Stoke.

Matt Crooks’ 10th and 11th goals of the season either side of a Lewis Baker own goal retained Boro’s interest in the promotion race despite a late Nick Powell consolation.

However, Millwall’s hopes of sneaking in on the last day of the regular season require a significant change in goal difference despite their 3-0 win over Peterborough.

Benik Afobe and George Saville scored in the second half either side of a Josh Knight own goal. They remain three points behind sixth-placed Sheffield United with one match to play but are six goals worse off.

Johnson quickly canceled out Aiden Marsh’s 17th-minute opener and then doubled his tally shortly after half-time, with Riis Jakobsen’s 19th goal of the season sealing victory.

Bristol City swept aside Hull 5-0 thanks to two goals apiece from Andi Weimann and Chris Martin, with Antoine Semenyo adding the other.

Will Vaulks’ 83rd-minute penalty secured a late 1-1 draw for Cardiff after Jeremie Bela had given visitors Birmingham a first-half lead.

Jack Muldoon put Harrogate ahead from the spot in the first half before Jamille Matt leveled with his 19th goal of the season, also from the penalty spot.

Sunderland loanee Jack Diamond regained the lead for Harrogate a minute after the restart and substitute Lloyd Curry clinched the win on 72 minutes.

Northampton no longer have control of their own destiny in the race for a top-three finish after being held to a 1-1 draw by already promoted Exeter City.

The Cobblers needed to win both remaining games to guarantee promotion but Sam Nombe canceled out Mitch Pinnock’s superb opener to open the door to Port Vale, who are at home to Newport on Monday.

Dale took a two-goal lead into the break after Luke Charman scored in the ninth minute and added a second eight minutes later.

Sam Finley brought Rovers back into the game with a composed finish in the 53rd minute but Dale restored their two-goal lead on the hour mark when Matt Done teed up Corey O’Keeffe.

Rovers hit back when Antony Evans slid an intelligent delivery across the face of goal for Collins to convert. They then drew level in the 89th minute through Collins he clinched all three points in the 95th minute when turning home Elliott Anderson’s header.

Rovers’ Paul Coutts was sent off in the last few seconds during a melee in his own penalty area.

Swindon climbed into the play-off positions after goals from Josh Davison and Louie Reed earned them a 2-1 win over Barrow.

Matt Platt restored parity late on with a header before Reed rounded off a brilliant individual performance to earn all three points with a close-range goal in the 85th minute.

Goals from Theo Archibald and Aaron Drinan gave Leyton Orient their third win in the last four away games with a 2-0 victory at Crawley Town, who have now lost three games in a row following the suspension of head coach John Yems.

Charles Vernam scored twice for Mark Hughes’ side, taking his tally to eight for the season, before Yann Songo’o and Andy Cook wrapped it up late on.

Alistair Smith scored Sutton’s goal 10 minutes into the second half.

Relegated Scunthorpe drew 1-1 at home to Hartlepool United and Tranmere heaped more misery on Oldham with a comfortable 2-0 win.

Carlisle won their last home game of the season as they beat Stevenage 2-1 at Brunton Park thanks to goals from Joe Riley and Lewis Alessandra.

Freddie Sears scored twice as Colchester United played out a 2-2 draw with Walsall, whose goals came from Brendan Kiernan and George Miller.