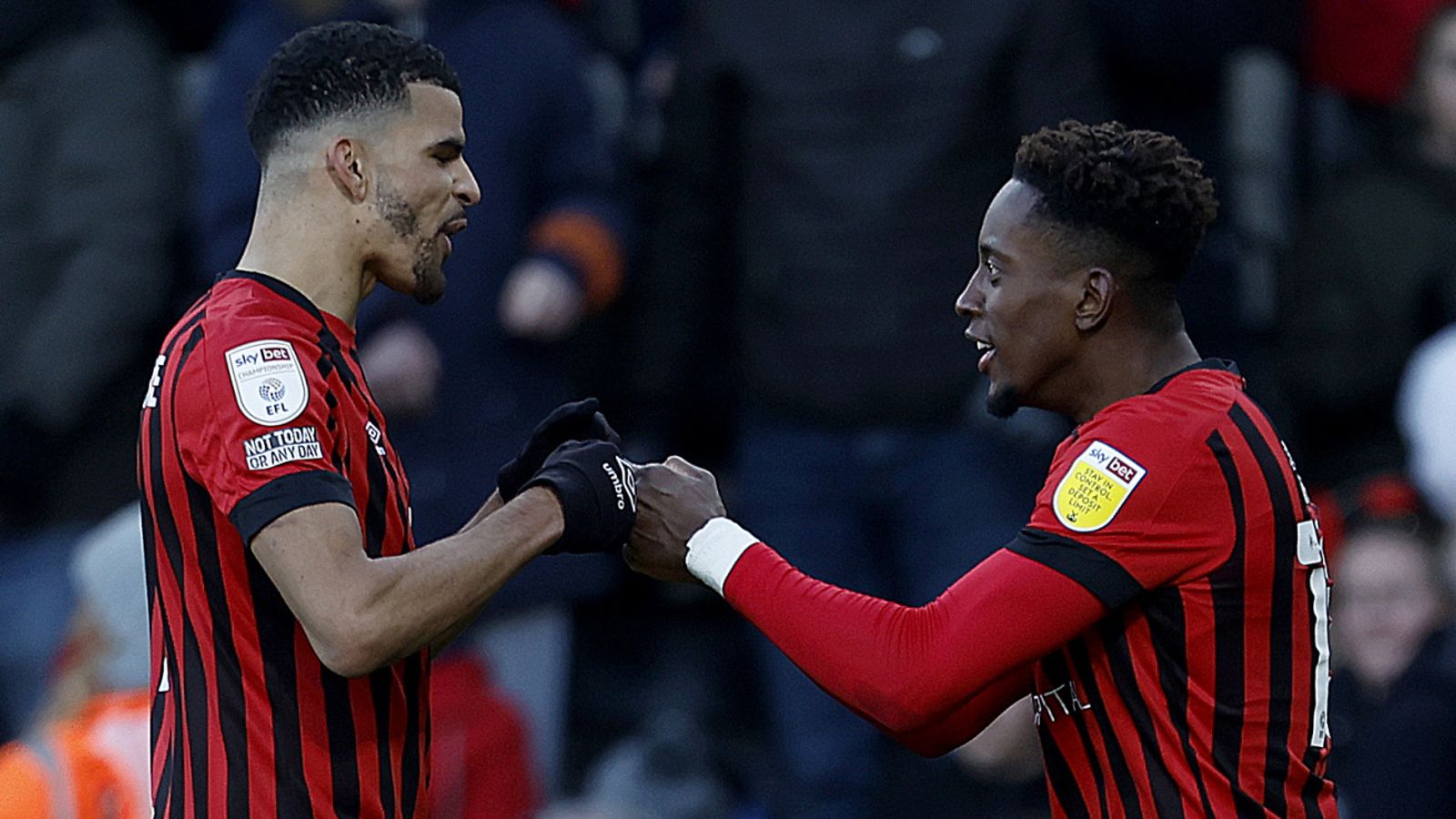 Stoke led through Tommy Smith after 20 minutes but had Morgan Fox sent off before the break for felling Philip Billing.

The Cherries failed to find a way through their 10-man visitors until Dominic Solanke leveled seven minutes from time.

Jamal Lowe came up with the last-minute winner for Bournemouth to stay two points clear of third-placed Huddersfield. 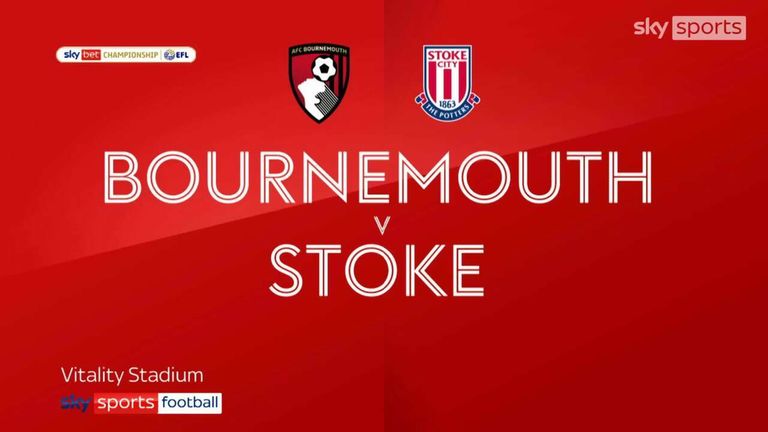 Highlights of the Sky Bet Championship match between Bournemouth and Stoke City.

The Terriers extended their unbeaten league run to 15 games with a 2-0 victory at Birmingham.

Leaders Fulham stay nine points clear at the top after winning 1-0 at Cardiff.

Blackburn beat QPR 1-0 to move above their promotion rivals into fourth.

The win was Blackburn’s first in six games and Tony Mowbray’s side are four points off the automatic promotion places.

Danny Hylton scored the Hatters’ winner midway through the second half.

Sheffield United drop to seventh after losing 1-0 at Millwall. 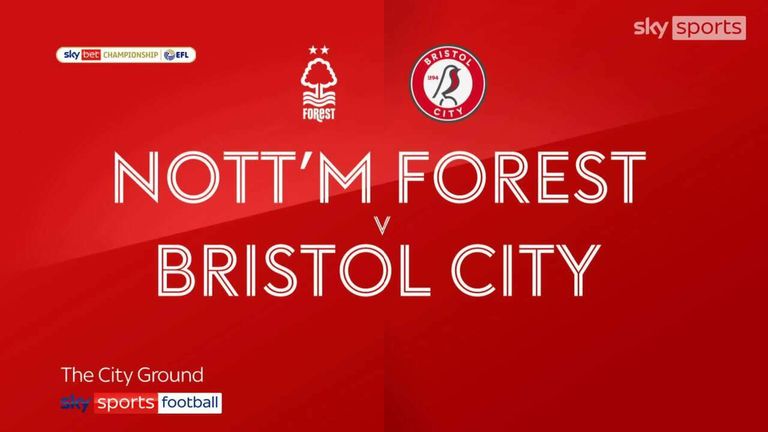 Highlights of the Sky Bet Championship match between Nottingham Forest and Bristol City.

Nottingham Forest are also within striking distance of the play-off places after beating Bristol City 2-0.

Brennan Johnson and James Garner were on target either side of the break as in-form Forest made it seven wins from nine home games.

Barnsley shocked play-off chasing Middlesbrough with a 3-1 win at Oakwell.

Blackpool fought back to beat Reading 4-1 as Paul Ince suffered his first defeat in charge of the Royals.

Coventry and Preston drew 1-1 with most of the action reserved for a dramatic finale.

Preston defender Liam Lindsay was sent off six minutes from time and he was soon followed down the tunnel by Coventry’s Fankaty Dabo.

Daniel Johnson put Preston ahead from the penalty spot in the final minute but Fabio Tavares leveled in the eighth minute of stoppage time for the Sky Blues, just moments after coming on as a substitute.

Tyler Smith opened the scoring and Keane Lewis-Potter struck twice in the second half for a Tigers side who only parted company with McCann last month.

Rotherham strengthened their grip on top spot in Sky Bet League One as they edged out Plymouth 1-0 away from home to move nine points clear at the top.

The game’s decisive moment came when top-scorer Michael Smith got his 18th goal of the season, drilling the ball home in the 63rd minute.

Wigan had started the day in second place, but slipped to third as they lost 3-0 at home to Sunderland, who ended a poor run to consolidate their position in the play-off places and give boss Alex Neil his first win.

The Black Cats led just one minute in as Alex Pritchard’s free-kick was headed in by Bailey Wright.

Ross Stewart then doubled the lead from the penalty spot after being tripped by Curtis Tilt, and the striker was on target from the spot again with four minutes left after a handball from Tendayi Darikwa.

Wigan’s defeat allowed MK Dons to move up to second, level on points with the Latics having played three games more, thanks to a 2-0 win over Bolton.

Mo Eisa and Scott Twine got the goals either side of half-time for the Dons’ third consecutive win.

Oxford are within four points of the automatic promotion places after Cameron Brannagan’s late brace proved decisive in a 4-2 win over Cambridge.

The visitors twice led in the match as Sam Smith took his season tally to 17 with a brace, the first after six minutes and the second 11 minutes into the second half after Matty Taylor had leveled for Oxford.

But Brannagan’s first brought Oxford level again with a little over half an hour to play, Mark Sykes then put them in front and Brannagan made sure in the last minute of the 90’s.

Sheffield Wednesday climbed above Plymouth and into the last of the play-off places with a 2-0 win over Charlton.

However, Wycombe’s promotion charge remains stalled as they hit seven games without a win, blowing two leads on their way to a 3-2 loss at Accrington.

Sam Vokes put the Chairboys in front, only for Korede Adedoyin to level seven minutes later. Sullay Kaikai’s goal was canceled out by Ross Sykes early in the second half, before Harry Pell got the winner for Stanley.

Dominic Gape hit the post for Wycombe late on while the hosts finished with 10 men as Mitch Clark saw red deep into stoppage time for a late challenge on Gape.

Aiden O’Brien’s stoppage-time equalizer denied Fleetwood a victory that could have eased their relegation worries as Portsmouth came from 3-0 down to draw 3-3.

That keeps Fleetwood level on points with AFC Wimbledon, who threw away a two-goal lead in drawing 2-2 at home to Doncaster to remain two points above the drop zone.

Morecambe, who sits in 21st, were denied victory late on as Wes Burns rescued a point for Ipswich in a 1-1 draw.

Gillingham breathed life into their survival push with a 2-0 win at fellow strugglers Lincoln with goals from Vadaine Oliver and Ben Thompson.

Rock bottom Crewe ended their run of seven straight defeats with a 2-1 win away to Cheltenham as Chris Porter scored a last-gasp goal – although they remain eight points adrift of safety.

Goals from Tom Bloxham and Matthew Pennington gave Shrewsbury their first win in 10 games as they won 2-0 at Burton.

Mark Hughes suffered defeat in his first game in charge of Bradford as Mansfield recorded a 2-0 away win.

The former Wales and Manchester City boss had been out of management since leaving Southampton three years ago before his surprise appointment on Thursday.

But goals in either half from Rhys Oates and Matty Longstaff consigned the Bantams to a fourth straight defeat in League Two.

Leaders Forest Green suffered a second successive defeat as they were beaten 2-1 at Crawley.

Rovers, beaten at home by Walsall last weekend, found themselves trailing at the break as Ashley Nadesan and Jordan Tunnicliffe put Crawley in control.

Although defender Dominic Bernard pulled a goal back with 10 minutes left, there was no late drama.

The Cobblers went down 1-0 at Rochdale, where Tahvon Campbell’s goal early in the second half proved the difference.

Tranmere were beaten 4-2 at Newport, who scored twice in the last three minutes.

Aaron Lewis’ goal early in the second half gave County the lead, which was followed by a penalty from Dom Telford before the hour.

Rovers rallied as Josh Dacres-Cogley reduced the deficit before an own goal from Newport defender Mickey Demetriou leveled things up at 2-2.

However, Finn Azaz struck with just three minutes left to put the Welsh side back in front before Telford wrapped things up in stoppage time.

Exeter also failed to make up much ground on the top three after they were held to a 1-1 draw at Bristol Rovers.

Luca Hoole gave the hosts an early lead, with Jevani Brown equalizing midway through the first half.

Promotion hopefuls Swindon – who thrashed Walsall 5-0 on Tuesday night – were beaten 2-1 at home by Salford.

Harry McKirdy had put the Robins in front early in the second half, but Liam Shephard equalized after the hour and Ryan Watson headed a winner with four minutes to go.

Sutton are fifth after they beat bottom club Scunthorpe 4-1.

Rob Milsom’s penalty was quickly followed up by Will Randall’s strike on the half-hour and Joe Kizzi added a third before half-time.

Randall got his second just after the hour, with a late own goal from Sutton substitute Harry Beautyman providing little consolation for the Iron who are eight points from safety.

Carlisle won 1-0 at managerless Leyton Orient to boost their own survival hopes with an early goal from Patrick Omar to give new boss Paul Simpson a perfect start to his second stint in charge.

The O’s, who parted company with Kenny Jackett shortly after the 2-0 defeat to Bristol Rovers in midweek, had midfielder Theo Archibald sent off early in the second half for two quick cautions.

Strugglers Colchester and Oldham drew 1-1, with an own goal from Latics defender Jordan Clarke canceling out Davis Keillor-Dunn’s first-half opener for the visitors.

Elsewhere, Port Vale beat Stevenage 2-0, George Miller scored in each half as Walsall beat Hartlepool 3-1 while Barrow and Harrogate drove 0-0.