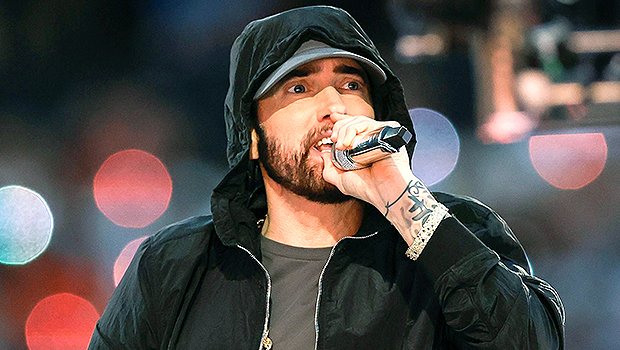 Eminem‘s gorgeous 26-year-old daughter Hailie Jade recently shared a beautiful selfie on her official Instagram page with over two and a half million followers. The photo, with already over 50-thousand likes, shows her standing in front of a plant on a bright sunny day.

In the post, her bright blue eyes strikingly resemble her father’s, and she protects them with sleek silver shades. Her sandy brown hair is pulled back in a tight bun, while her eyebrows and lashes are on point to complement her bronzed skin. She also sports minimalist silver jewelry, yellow almond nails, and a fresh white tank top. “Happier than I look here,” the caption read as she had a serious expression on her face while shading her eyes with her hand.

Also known as Hailie Scott Mathers, the rapper’s daughter was raised in Detroit, Michigan, just like her father. She is the subject of many of the rapper’s songs such as “Hailie’s Song” and “Mockingbird.” After being named Homecoming Queen at her high school in 2013, she went on to enroll at Michigan State University. She is currently exploring her life as a fashion influencer, as she regularly posts herself in stunning outfits on her Instagram page.

For example, in April, she stunned in a vibrant cropped green buttoned blazer and high waisted ripped jeans. A few weeks earlier, she stood in the sun once again while rocking high waisted leather pants, a black tank top with white stitching, and a chic white sunhat. She sported a similar look in late March with a bright blue jacket, that was unbuttoned to show off a simple bralette. Her brunette hair was undone in glamorous Hollywood style waves, as she looked in the directly in the camera while adjusting her black baseball hat. Clearly a fan of the scenic outdoors, she also posted a photo of herself in March near the Joshua Tree in California. There, the fashionista sported funky white ankle boots, a tight pencil skirt, and a nude trench coat.

Tyler, The Creator Wins Best Rap Album: See Other Past Winners From The Last 20 Years