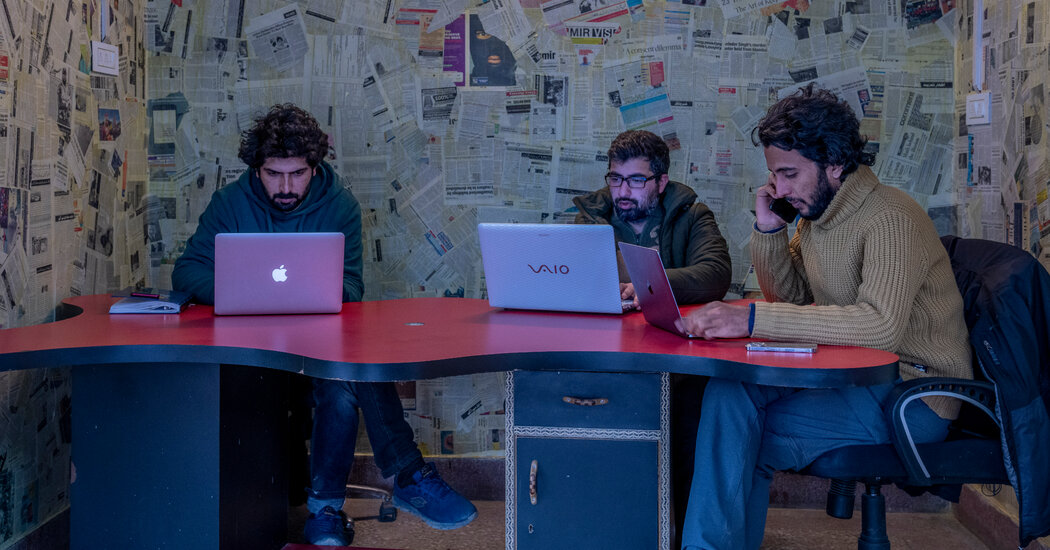 NEW DELHI – The editor of a news site has been arrested in Kashmir, in which critics cited the latest example of a wave of harassment by government officials in the troubled region.

The editor, Fahad Shah from The Kashmir Walla, was arrested on Friday after being called by police, said Yashraj Sharma, a colleague. He had been summoned for questioning four days earlier because of the site’s coverage of a deadly police raid in late January, Mr Sharma said.

This raid in the Pulwama district left four people dead. Police described three of them as militants and the fourth, a 17-year-old, as a “hybrid militant.” Kashmir Walla interviewed the teenager’s family, who said he was an innocent civilian and appealed to the government to return his body. The article on the news website also contained the perspectives of the police and the army.

Kashmir police said in a statement on Friday that they had arrested Mr. Shah for “uploading anti-national content” and that he was still in their custody.

“Authorities must immediately release Shah and all other journalists behind bars and stop detaining and harassing journalists just to do their job,” he said.

The Indian security forces have tightened their grip on Kashmir since Prime Minister Narendra Modi dissolved the region’s elected government in 2019 and brought it under direct rule from Delhi with a heavier military presence.

Increasingly, journalists and activists critical of the security forces have been summoned for questioning, and more have been detained. In November, police arrested Khurram Parvez, a prominent activist who has largely documented assaults on civilians carried out by the Indian authorities as well as by militant groups active in Kashmir.

UN human rights experts have expressed concern over Mr Parvez, who is still being held under a strict anti-terrorism law. They said his detention appeared to be “retaliation for his legitimate activities as a human rights defender.”

Last month, police arrested Sajad Gul, another Kashmiri journalist and a contributor to The Kashmir Walla, for posting on social media that they considered offensive. Sir. Yellow received bail on January 15, but police filed another lawsuit and continued his detention.

Authorities have also effectively closed Kashmir’s press club, a base for supporting journalists, and forced it out of the state-owned building where it had been operating. It happened after a dark election battle in the club, where police officers helped a faction take physical control of the building.

Authorities later said the club had ceased to exist and that they had recaptured the site to avoid a “potential law-and-order situation.”

“Space for media freedom and active civil society is steadily eroded in the region,” the Editors Guild of India said in a statement after the club closed. “In a state marked by such excesses against the media, the Kashmir Press Club was an important institution in the fight for the protection and rights of journalists.”

In addition to running The Kashmir Walla, a decade-old business that employs about a dozen journalists, Mr. Shah contributed to international publications such as The Nation, Time and Foreign Policy. In a statement, DD Guttenplan, the editor of The Nation, condemned the arrest and said “we stand unequivocally in support of Fahad Shah.”

Violence and harassment by police, political groups and criminal gangs make India “one of the world’s most dangerous countries for journalists,” according to Reporters Without Borders. The organization ranked India as number 142 out of 180 countries in its 2021 press freedom index, and expressed particular concern about deteriorating conditions for journalists in Kashmir.